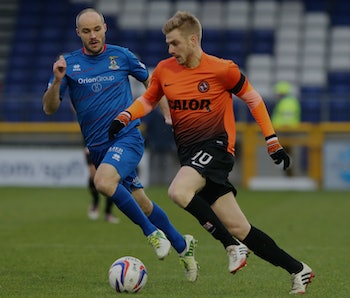 Artificial intelligence is notoriously flawed. It's riddled with the biases of its creators, prone to errors when things get too nuanced or complicated, and we're still getting to grips with which tasks it's bested suited to. Calling AI “intelligent” would be, in many cases, an overstatement. Case in point: its ability — or lack thereof — to distinguish between a gleaming, bald, pate... and a soccer ball.

There’s an AI camera system that some sports teams have switched to since the pandemic. The AI camera’s goal is simple: follow the ball across the playing field to give viewers the best possible experience of the game. But as the example below demonstrates, even when the stands are empty and there are few distractions, the system runs into an unexpected problem.

In one instance highlighted by The Verge, the AI camera used to broadcast Scottish soccer team Inverness Caledonian Thistle FC’s game mistook a bald linesman's head for a soccer ball. The camera repeatedly pans to follow the official's movements rather than that of the actual soccer ball.

A moment of technological levity — Every once in a while technology proves itself useful in areas other than productivity. While AI malfunctions can absolutely be frustrating, they also have the uncanny ability to make us laugh.

The camera is obviously malfunctioning here — at one point the situation was reportedly so bad that the game’s commentator apologized for the issue. It probably made the game very difficult to watch, if you really wanted to see the action. For the rest of us, though, it’s pretty hilarious.

Real-world consequences — While the levity of this situation is much-needed right now, it’s also a pertinent reminder of AI’s inherent flaws. Those shortcomings are funny in a low-stakes situation like watching a soccer game (sorry Inverness fans). In more important situations, though, AI’s failures can be dangerous.

Take, for example, Tesla’s Autopilot system, which uses AI to calculate driving conditions and react accordingly. The system is impressive in some regards, but it’s also caused fatal crashes on more than one occasion.

This will keep happening — Flaws in artificial intelligence systems also have an immense impact on our experiences on the internet. Algorithms like Facebook’s consistently spread conspiracy theories across the platform despite policies that officially seek to limit their proliferation. Twitter’s AI processes, meanwhile, often crop images along lines of racial bias.

AI is fickle and flawed. These problems will continue to crop up as we piece together the best ways to create and utilize artificial intelligence in our daily lives. The best we can do in the meantime is fine-tune our technology with feedback gathered from real-world tests like this one — and allow ourselves to laugh at their failures, too.