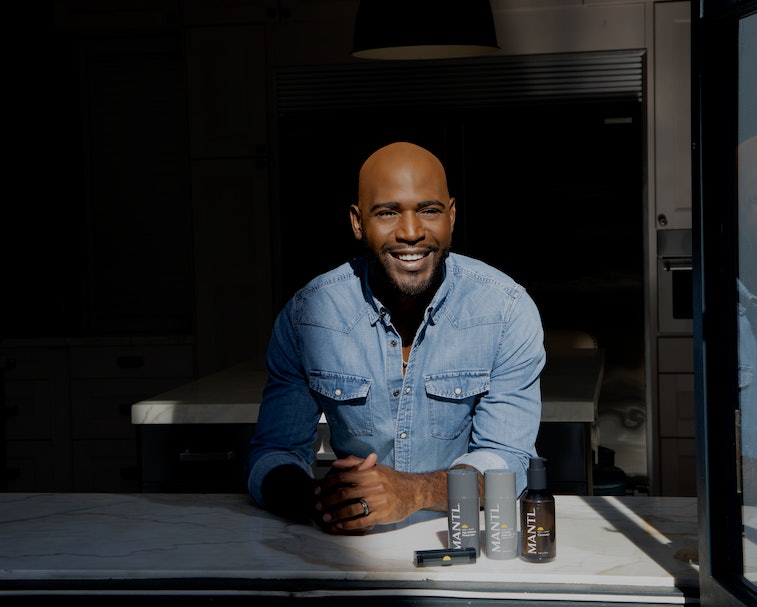 Queer Eye star Karamo Brown is known for his Instagram-style life advice and his impeccably-groomed, model-like looks. He’s been a flashpoint for controversy — just last year he met backlash on social media over a FaceTuned shirtless photo of himself with “#DadBod” in the caption. When the photo was taken down by Instagram, he posted a different version, this one also altered, with the caption “#ByeHaters.”

But he’s always ready to wax poetic about self-love. Which is exactly what made him want to create a new skincare line, MANTL, which is designed specifically for thinning and balding men like himself. We recently chatted with Karamo about masculinity and self-care in the digital age.

Input: Do you think many men feel demoralized to take care of themselves when they start balding?

Karamo: They think of it as a negative. You don't look good. You're not going to get the person you want to date. You're not gonna have the career you want. You can't swim. That's the one that gets me. Now when this came about, I was just thinking about my hair journey and the fact that when I started thinning at 23, I had all this fear and felt uncomfortable. And I wanted not only to create products that were great, that would really support me and that would be easy to use, but I also wanted to make sure there was a community to support their self-esteem and really help them to get over that stigma.

So the brand focuses on products specifically for balding men. Something I was really interested in is — what makes these different than like a regular facial moisturizer?

So as we know, if you're a man who's thinning or balding, you're not going to really use shampoo. But you're still going to need to moisturize your scalp. So our cleanser works on your face and on your scalp. So that way you're getting everything at once as well. Ideally, SPF is clear. It's not going to leave a cakey or residue white stuff or anything of that nature. So our products are different because we're really thinking about the experience that men have who are bald or are thinning.

So how many formulas have you developed?

There's four products total that are going to be launching. One is a cleanser. Then there is a moisturizer and then you can put on the SPF that goes on your face and scalp and beard. And it's not going to leave any residue. And then we have these oil blotting pads so that you're walking out and you're going through your day, if you get a little oily, you can blot it off.

You obviously have been thinking about skin care a lot. So how would you say that skin care differs for a man versus a woman versus a non-binary person? Like, is it just a matter of convincing them that it’s worth their time?

That’s something else I want to ask you about. How do you see MANTL working to sort of dismantle traditional ideas of masculinity?

When you've been conditioned for, you know, however many years that if you're balding or you're thinning, that you have to hide, you have to be ashamed. This is, in a sense, a brand new concept for a lot of people are like, “You're telling me I can be proud of something that's natural?” and “You're telling me that I can be okay and I can feel good about who I am? And you're telling you that if my skin is dry and hurting or if it's red or I have age spots, you're telling me that it's okay as a man to use this?” And I think when you can allow a space for people to have conversations around that, it starts to build their self-esteem, which in turn they become better human beings at work with their families. They just become better. That's my goal.

What do you think about how social media compounds these issues? You know, feeling like we have to edit photos for Instagram. How do you feel about how that works with especially masculine confidence and self-love?

It plays on our self-esteem. I'm victim to it. I edited a photo in FaceTune — and I wish that I could be the poster boy for someone who feels confident 24/7 but that's not realistic, especially in the public eye. You start feeling these pressures — part of that you can see in my own personal journey of me thinning and balding in Season 1 and 2 of my show, I literally drew in my hairline every single day so that I could look like I was younger. I was scared of the judgment that I would receive online when people watched the show. That fear is real for a lot of people — because the thing is it's what happens in high school but now it's happening in our homes. Our homes are normally the most secure place for us, where you're sitting in your house and you feel like “Nothing can hurt me here.” And someone then starts saying negative things to you. It's about the transparency of like where you are on your journey and sometimes you're like me where, you know, season 1 and 2, I was drawing on my hairline. But eventually, with a community, and with this product, you can start to feel better and then you won't feel so ashamed.