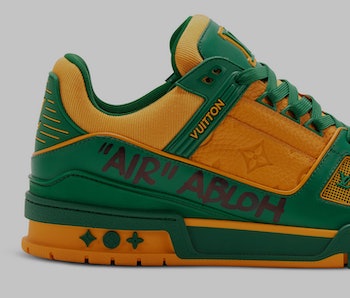 Only a few months after the passing of Virgil Abloh, it seems everyone is trying to secure a piece of his legacy. The designer’s absence in the fashion world — felt particularly at Louis Vuitton and Off-White — has resulted in a slew of auctions featuring the last of his work. Each piece is more exclusive than the last, evident by a single pair of signed sneakers up for grabs at Sotheby’s.

Flaunting Abloh’s signature “Air Abloh” mark in sharpie, the Louis Vuitton LV Trainers nearly serve as an artifact of the designer’s career. The orange and green shoe was first presented at Abloh’s debut Spring/Summer 2019 show for Louis Vuitton, where he worked as the menswear artistic director and melded the worlds of streetwear and high fashion.

Going once — Abloh’s LV Trainers were inspired by the Air Jordan 3 and Avia 880 basketball sneakers from the late ‘80s, and this particular color scheme invokes Miami sports teams with bright orange and green. A grained calf leather base comes embossed with Louis Vuitton monograms, sitting beneath smooth green calf leather overlays. Rubber outsoles, monogrammed flowers, and further “LV” branding at the tongue, heel, and eyelets finish off the shoe.

Like other sneakers from Louis Vuitton’s expansive collection, the LV Trainers were hand-crafted in Italy, and each takes seven hours of stitching to produce. This pair, available in a size 10.5, comes with a letter from James Spence Authenticated to validate Abloh’s signature. The lot also comes with two polaroids of Abloh posing with the pair.

As exclusive as it gets — Sotheby’s estimated the signed sneakers would sell between $8,000 to $12,000, but, at the time of writing, the signed sneakers already have a high bid of $17,000. With collectors trying to accumulate a slice of Abloh’s design history, demand is high. Exclusive pairs of the Nike x Louis Vuitton Air Force 1 sneakers sold for up to $350,000 each, while a complete collection of his Nike collaboration “The Ten” currently sits at $22,000 with the auction still ongoing. Even snowboards designed by Abloh have sold for up to $50,000 recently as part of a collaboration with Burton.

Bids for the pair of signed LV Trainers are open at Sotheby’s website until April 5, and you can expect their price to keep on rising. The auction is a rare chance at something designed and signed by Abloh, and some will spare no expense for a piece of his legacy.