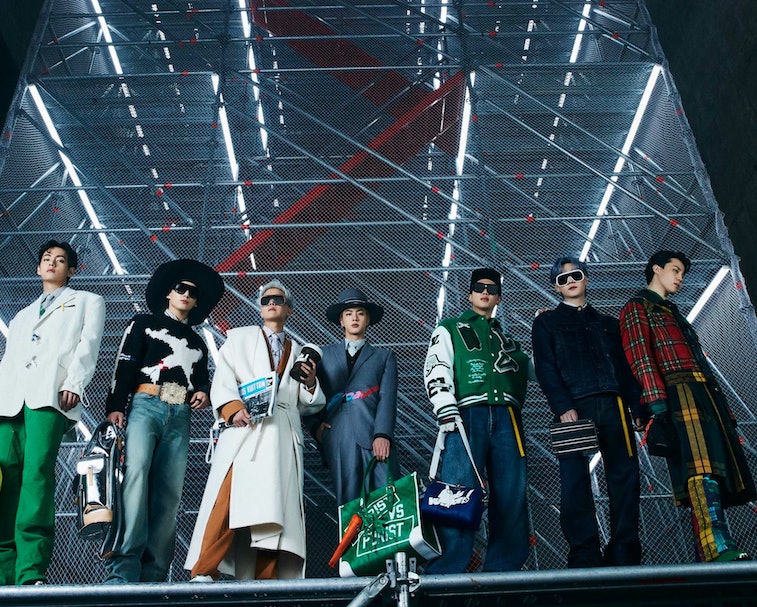 Virgil Abloh is launching a spin-off to his Fall 2021 Louis Vuitton collection — and it’ll be brought to life by none other than BTS. The designer has tapped the boy band to feature in a fashion film directed by South Korean filmmaker Jeon Go-Woon, which includes 34 new looks and seven from the original FW21 collection.

In April, each member of BTS was enlisted as a brand ambassador for Louis Vuitton, boosting the luxury brand’s image (and sales) to new heights. A video of BTS receiving an invitation to LV’s FW21 show is currently the brand’s most liked and retweeted post to date, thanks to the band’s worldwide popularity.

Take a trip with BTS — While BTS’ fame certainly benefits Abloh’s spin-off, the designer claims the point of the project is to present his collections in different ways and contexts across the globe. With his original capsule exploring the idea of travel, the fashion film will be “a conversation between space, movement, and global connectivity,” Abloh told WWD.

Serving as an ode to traveling, the film opens with a narrator: “I had been a pilot for around seven years. In the midst of bad weather, I began my trip having gone through countless amounts of typhoons. I was familiar with the skies but I came across a totally foreign place. Tall skyscrapers, wide windows, and long halls," the show began, with the narrator seemingly describing the opening setting.

The film, which takes place in BTS’ hometown of Seoul, sees the boy band members don bright outfits while making their way through a series of steel cages in a concrete warehouse. Each member of the band — of which there are seven — wears one outfit from the spin-off, nodding to the travel theme through airplane buttons and oversized travel bags. Above the scene, a small blimp reading “Hope” eerily hovers, perhaps commenting on the past year inside which was largely spent without travel.

Show-stoppers — In tune with the shuttered feeling, onlookers don’t get much of a view of Seoul. But Abloh insists that BTS embodies the “vibe” of the city completely, he told WWD. “They add their spin to the collection, make it their own and take it to new heights.” Accordingly, Abloh has styled each BTS member with their own characteristics in mind.

Jimin, widely considered the most fashionable of the band members, opens the show in a light marbled suit and gold sunglasses. Following his debut is RM — the first member of the band — who dons an oversized dark suit accessorized with a matching hat and silver briefcase. Suga then appears wearing a black suit with green and white sneakers.

J-Hope models a suit that encapsulates the show’s travel theme with a map of the world embroidered onto his jacket and tie. Jungkook and V, on the other hand, keep it simple in crisp black suits accessorized by an oversized coffee cup-shaped bag and statement jewelry. Jin closes out the film in a checkered crimson and black coat.

The spin-off has made it clear that BTS knows how to put on a show, music or not. There’s no doubt the band’s first major project with Louis Vuitton has only cemented their high-fashion status.