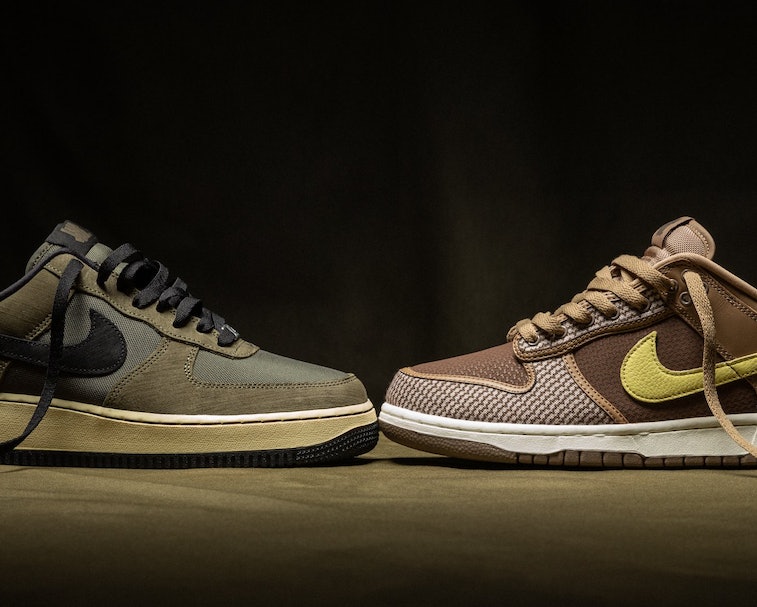 Longtime collaborators Nike and Undefeated are bringing back their most iconic Air Force 1 and Dunk releases, only with the treatments reversed. A new Air Force 1 will take on the color scheme of the Dunk “Ballistic,” originally released in Undefeated’s early days and re-released in 2013, while the Dunk Low opts for the treatment of 2006’s Air Force 1 “On Your Feet Kid.”

On their own, the Dunk and AF1 are two of the most heralded sneakers in history, and a staff debate over the two is what inspired the upcoming pack. Undefeated says an early argument in the shop over the most “classic streetwear” sneaker of all-time quickly divided the staff into two camps — and really, there’s no wrong argument.

In order to capture the gravity of this monumental sneaker crossover event, Undefeated turned to Eric Koston, Jimmy Gorecki, and Aleali May to model the new Air Force 1 and Dunk.

The breakdown — Like the Air Force 1 that proceeded it, the Dunk Low “On Your Feet Kid” utilizes a natural-toned premium leather for the upper along with shemagh pattern overlays pulled from the scarves worn in Middle Eastern countries to protect its wearer from the sun, wind, sand, or cold. Giving it further pop is a “lemon frost” Swoosh, while Undefeated branding is embroidered onto the foxing in addition to appearing on the tongue label.

Releasing alongside it is the “Ballistic” Air Force 1, which gets its name from the durable nylon used for the base of the upper. The leather overlays have been given a unique treatment that makes it look windswept, while the midsole has been intentionally yellowed to look like it’s been aged. Undefeated’s logo appears in the same places as the AF1s counterpart, and the olive drab and black color combo make it a perfect earth-toned companion.

Can you get at least one of two? — As far as we know for now, Undefeated will be the sole handler of the two sneakers’ release. A raffle for in-store pickup at Undefeated’s chapter stores opens online at 11 a.m. ET today, while the online drop goes down at 11 a.m. ET this Friday, June 18.

Nike SNKRS may also release the Dunk and Air Force 1 at a later date, but don’t risk getting left out in the sneaker desert by holding out for it.