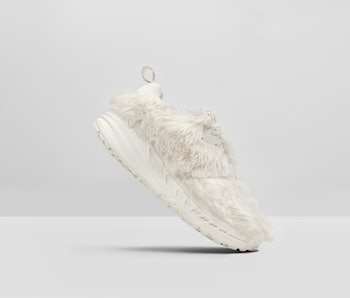 Continuing its concerted effort to become a bonafide fashion player, Ugg has announced an aggressive push in 2020 for its first sneaker silhouette. Originally released in 2018, the CA805 sneaker will be at the center of a new “12x12” collection that’ll see a new version of the sneaker drop every month. One of the first three sneakers to be announced is called “The Rat,” and it’s so over-the-top I have to admire it.

A furry friend for your feet — I could spit out nicknames for these little furballs they’re calling footwear all day. The Yeti. The Maltese. Sweetums. I mean no malice, though, because the scruff is a true delight. It looks as if the inside of your standard Ugg boot has been flipped inside out. What once provided comfort is now pure, shameless aesthetic. It could have looked gross, and it still may after a few wears, but Ugg managed to pull off the sheepskin rug of sneakers.

“We had to do something to shock people,” Ugg president Andrea O’Donnell told Highsnobiety. “We needed something bold and provocative.”

How to adopt — You can bring the creature into your home beginning January 17, when “The Rat” hits Ugg's website and select retailers. Don’t worry, you won’t need to feed it.