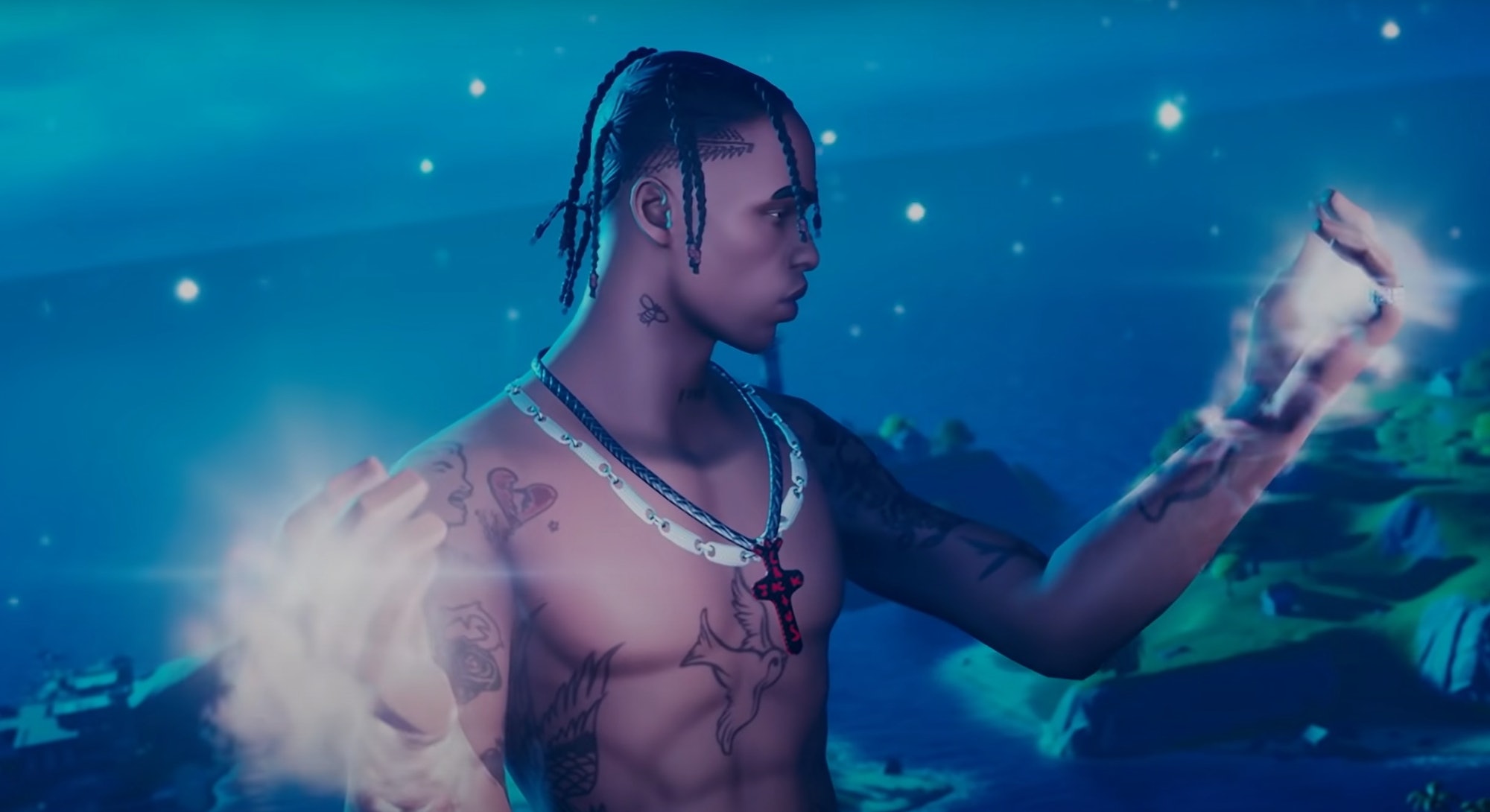 Travis Scott’s popularity transcends music. Not only is he one of the hottest rap artists of the moment, but his recent collaborations with brands such as Nike, Reese’s Puffs, and Fortnite have been all the rage.

His brand is so strong that, much like Supreme, he could easily slap his Cactus Jack logo on a brick and it would sell out in seconds. Such level of influence is what celebrities dream of and, in just a few years, Travis Scott has made it a reality for himself.

Last month, as part of his collaboration with Epic Games — in which they turned Fortnite’s universe into a trippy, virtual concert called Astronomical — Travis Scott dropped a collection full of apparel and accessories inspired by video games. The merch was also designed to celebrate the debut of a single dubbed The Scotts, featuring Kid Cudi. Among the more than 60 items that were available, the limited-time capsule included hoodies, hats, blankets, rugs, polo shirts, posters, and vinyl records.

Random merch from Travis Scott and his brand Cactus Jack are nothing new, but this particular drop had an interesting spin: many of the items donned a redesigned, Cactus Jack version of the iconic “Super Nintendo Entertainment System” and PlayStation “PS” logos. Unlike his sneaker collaborations with Nike, though — one of which features a backwards Nike swoosh logo on an Air Jordan 1 — the Nintendo- and PlayStation-themed goods weren’t an official partnership between Cactus Jack and these gaming companies.

That begs the question, then: Could Nintendo or Sony/PlayStation sue Travis Scott for creating (and selling) gear with their tweaked logo on it? The simple answer to that is “yes,” especially considering how protective both companies are of their intellectual property. But, whether Nintendo or PlayStation could actually bring, and win, a legal case against the rapper is more complicated than that.

There are two IP laws at play here: copyright and trademark. As The Fashion Law notes, copyright is geared toward “original works of authorship fixed in any tangible medium of expression,” such as books, movies, music, photographs, software code, or video games. Trademark, meanwhile, protects any “word, name, symbol, design, color, or any combination thereof” used to define a brand, manufacturer, or seller, like “Nike” and its swoosh logo. The same would apply for Nintendo’s and PlayStation’s logos.

At the same time, there are key intellectual property infringement exceptions to consider, like “fair use,” which “allows use of copyrighted materials without obtaining permission as long as the use can be considered fair” based on a consideration of several factors, according to Purdue University.

For that argument, which Travis Scott could make if he were to get sued by Nintendo or PlayStation, courts tend to consider a four-factor analysis: Purpose and character of the use of the work, nature of work, amount of the work being used, and market effect, with each element being evaluated to “make a good faith determination as to whether the use, in light of all four factors, can be considered fair use.”

With his latest mech, Travis Scott essentially modified the Super Nintendo Entertainment System and PlayStation PS logos and slapped them all over Cactus Jack apparel and accessories. For example, a brown hat and hoodie featured a design that read “Cactus Jack Entertainment System” with the same red colorblock font and design as Nintendo’s old logo, while other items came with a rainbow-colored logo that replaced Sony’s traditional “PS” with the letters “CJ,” short for Cactus Jack.

Using the fair use defense, Travis Scott could easily claim that his Cactus Jack merch was a parody. “A fair use is any copying of copyrighted material done for a limited and ‘transformative’ purpose, such as to comment upon, criticize, or parody a copyrighted work,” per Stanford University. Such uses can be done without permission from the copyright owner. “Unlike other forms of fair use, a fairly extensive use of the original work is permitted in a parody in order to ‘conjure up’ the original.”

Ultimately, legal experts say the fair use claim is open to interpretation for judges and lawmakers and any legal decision would come down to whether Travis Scott’s merch would cause confusion among consumers, and whether Nintendo or PlayStation could make the argument that his designs are affecting their bottom line.

The parody defense can also be used against a claim of trademark infringement. In 2009, The North Face sent a cease-and-desist letter to a teenager from Missouri who took the base design of its logo and created apparel under the brand name “The South Butt.” TNF requested that Jimmy Winkelman stop sales, production, and promotion of his product, claiming it could cause “consumer confusion as to the source, sponsorship or affiliation of particular promotions and services that could dilute or tarnish the distinctive quality of the famous and distinctive [The North Face] marks.”

Winkelman and The North Face ended up settling out of court in 2010, but due to the similarity between their two logos, this is the perfect example of a route Nintendo or PlayStation could take should they decide to go after Travis Scott and Cactus Jack. Another similar case is Louis Vuitton vs. Haute Diggity Dog from 2007. The fashion house sued Haute Diggity Dog, a company making pet products that parody luxury brands, originally alleging trademark infringement, trademark dilution and copyright infringement for selling “Chewy Vuiton” imitation purse toys that feature a pattern similar to LV’s monogram design.

In that case, the U.S. Court of Appeals for the Fourth Circuit deemed Haute Diggity Dog’s plushies as successful parodies, ruling that its products were not likely to be confused with those of Louis Vuitton because, among other things, they weren’t available at high-end stores and they cost significantly less than LV’s own. While many of the design choices of Haute Diggity Dog plushies were similar to Louis Vuitton handbags, the court ruled they weren’t identical enough to infringe on the fashion brands’ intellectual property.

“In some ways, the effectiveness of [making a legal argument] depends on whether courts recognize what [Travis Scott] is doing as sort of sufficiently artistic,” says Mark P. McKenna, a professor of law at Notre Dame Law School. “I would think the companies [Nintendo and PlayStation] would make the argument that because he has these other kind of commercial relationships, even if people recognize that this is sort of like a takeoff on the logo, they're going to think that it has some connection to them because they're working with him in the same way he is with Nike.”

McKenna’s point is that because Travis Scott has done collaborations with a brand like Nike, consumers could be confused into thinking his Nintendo- and PlayStation-inspired merch is part of an official partnership between them and Cactus Jack.

“The trick is that everyone sells merchandise. All these companies sell merchandise. Even though their main product line is something else, it's not unusual for any of these companies that have t-shirts or sweatshirts or hats or whatever. You could imagine them having deals with people who help make those kinds of things.” McKenna says. “There's also clearly an artistic element that's going on. That's why I sort of feel like the push and pull here is between: is this like ordinary off the shelf merchandise or is it more like art? How much is that going to influence a court's willingness to treat it like an expressive thing as opposed to a standard merchandise?”

“I’m going to push this idea until Gucci either sues me or hires me.”

Another side of this is that, due to Travis Scott’s clout, Nintendo or PlayStation could be better off just working with him on an official collab. “Part of it is, what is the brand looking for?” says Rebecca Tushnet, professor of first amendment law at Harvard Law School. “Is it looking for street cred? Sometimes working with somebody who does edgy stuff can be a good way into that [world].” She points to the odd case of GucciGhost, the artist who became famous for making his own iteration of the “Double-G” Gucci logo.

“I’m going to push this idea until Gucci either sues me or hires me,” GucciGhost said about his work in 2016. And, as it turns out, Gucci ended up collaborating with him on new designs that made it onto the runway at Milan Fashion Week that year. “That was a very interesting response. It was a business response,” added Tushnet. “But Gucci versus Nintendo [or PlayStation] may have very different opinions about that.”

Travis Scott, Nintendo and Sony/PlayStation did not respond to Input’s requests for comment.