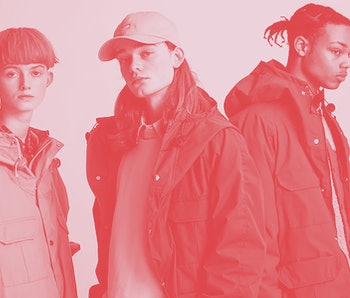 The North Face might be an obvious go-to for outdoor gear and protection against winter’s polar vortex, but The North Face Purple Label, its Japanese sublabel, may just have it beat. For this year’s fall and winter catalog, it’s got a massive lineup of apparel that reimagines the classics in the best way possible.

Purple label superiority — At first glance, the capsule doesn’t seem to stray too far from The North Face’s usual DNA. The silhouettes build on its traditional technical garment shapes, and there are plenty of pants, shirts, and jackets to go around. But when you look a little closer, you’ll see that the apparel — judging by the lookbook, at least — is actually full of new styles, cuts, fabrics, fits, and uses.

Technical hiking jackets, puffy anoraks, and fleece coats are just a few of the outerwear offerings that the brand pairs with retro t-shirts, flannel button-ups, and knitted sweaters. Layering is a major theme throughout the capsule as you can pair just about any of the pieces with each other. An oversized olive green jacket leaves plenty of room for an extra sweater or coat underneath, while baggy cargo pants partner with knee-length vests and outerwear for extra protection from the elements. The collection isn’t the casual sportswear The North Face is synonymous with; it’s something much more refined.

Whether you’re an avid multi-mile hiker or more of a daily-walk-for-mental-health type of person, there’s guaranteed to be something that suits your lifestyle and needs. And because it's a TNFPL production, the materials are built to last too. Purple Label has access to The North Face’s synthetic, technical fabrics, including ThermoBall insulation material and a proprietary fleece called TKA. The shirts, pants, and jerseys, however, use 100 percent organic cotton with quick-drying capabilities.

For those unfamiliar, Purple Label, although sitting under The North Face’s style umbrella, operates completely independently from the brand. You might’ve seen its Palace collab from last year or even have been able to cop those pieces yourself during its two-year-long contractual stint in the U.S. (which has since expired). It was founded by Nanamica creative director Eiichi Homma in 2003 as a way to bring a new perspective to The North Face’s heritage styles, which it does (and well, at that).

That being said, you won’t be able to find the label on the racks in the States, so you’ll have to be a bit tech-savvy to score a piece. The collection will only be available in Japan this fall and winter seasons, but, with the help of a proxy, you’ll be able to secure your wishlist and envy-worthy winter wardrobe without much trouble.