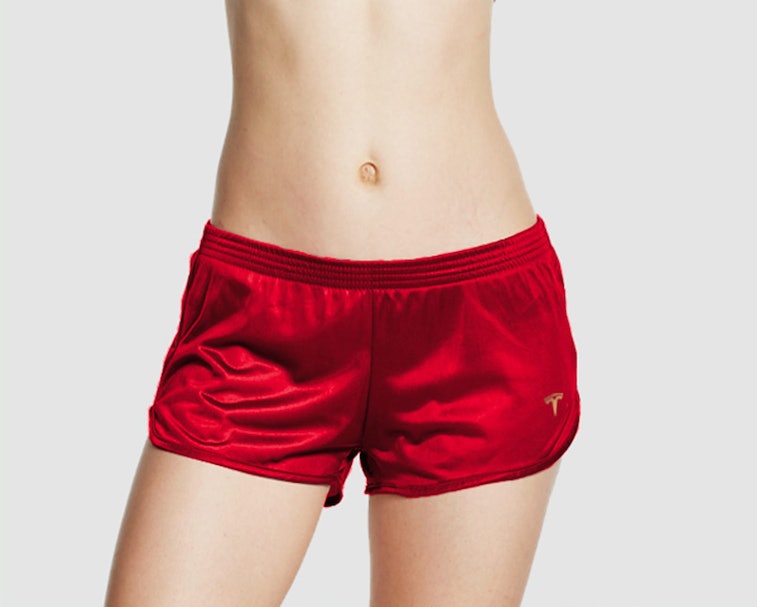 Is Tesla the new Supreme? Okay, no, that's a stretch beyond imagination. But, the world's most valuable automaker did take a page out of the streetwear brand's book with its latest hot product: the "S3XY" short shorts it dropped over the weekend, which apparently were so limited that you'll have to pay resale prices if you want a pair because they're all sold out. Featuring a red satin and gold trim design with "S3XY" lettering across the back — perhaps paying homage to the "JUICY" shorts that are iconic in thot circles — Tesla's shorts were originally priced at $69.420 (thank Elon Musk for being so clever). Now that they're out of stock on its online shop, though, they're going for up to $475 on resale apps such as StockX, or lower depending on the size you want.

This is real life — It's unclear why Musk felt the world needed a pair of Tesla short shorts, but on Twitter he seemed to be pretty excited about the "fabulous" product and said he would be sending some to the Shortseller Enrichment Commission "to comfort them through these difficult times." Tesla short-sellers, he's looking at you.

"Celebrate summer with Tesla Short Shorts. Run like the wind or entertain like Liberace with our red satin and gold trim design," reads the description on Tesla's webstore. "Relax poolside or lounge indoors year-round with our limited-edition Tesla Short Shorts, featuring our signature Tesla logo in front with “S3XY” across the back. Enjoy exceptional comfort from the closing bell." Of course, this entire thing would be surprising were it not coming from Musk, but everyone knows he loves being the center of attention and launching weird products like a flamethrower or short shorts seem to do the trick for him when it comes to being emotionally aroused.

Beyond StockX — If you missed out on buying the S3XY short shorts for $69.420 and don't want to buy them from the embattled StockX — which, for some odd reason, decided to edit Tesla's product images and removed the woman wearing them — you can also find them on eBay. There, they're reselling for anywhere between $100 and $200 but, again, it depends on the size you're looking for. It could also be worth keeping on eye on Tesla's site in case they restock, and the company says it'll ship them in 2-4 weeks. Let's just hope the quality control on the S3XY booty shorts is better than on Tesla cars.