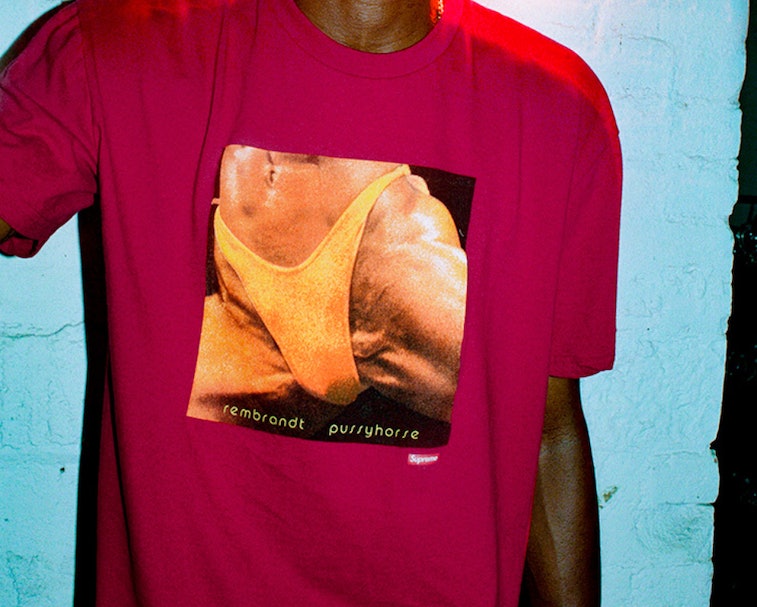 Supreme has unveiled a collaboration with the ‘80s-’90s punk band, Butthole Surfers, and it’s just as chaotic as the latter’s name would suggest. Paying tribute to the band’s experimental sound and use of non-traditional instruments (which may or may not have included actual butthole noises), Supreme has put forth co-branded tees complete with graphics that are quite literally, ass.

Not only is the apparel a callback to Butthole Surfers’ key albums — namely Another Man’s Sac, Rembrandt Pussyhorse, and Locust Abortion Technician — the odd collab reminices on when Supreme was more of an indie brand, instead of catering to hypebeasts with overpriced Oreos and toothpaste. Only real fans of the brand, or the band, will be after the T-shirts printed with crotch shots, clowns, and etched skulls. “Why would anyone want that shirt dawg?,” wrote one Twitter user.

Butthole branding — In its Instagram post announcing the collaboration, Supreme writes of Butthole Surfers’ iconic history — perhaps to enlighten its usual clout-chasing crowd. “Butthole Surfers are known for their chaotic live performances, absurd lyricism, and album artwork (which the band designs themselves),” the brand wrote, nodding to its tees bearing said artwork.

The frontside of each graphic tee, however, may deter Supreme’s usual consumers from indulging in the drop. Black, yellow, gray, white, and maroon shirts feature the etched skull cover art of Another Man’s Sac, while other tees bearing a veiny, bulging thong shot are offered in the same color palette. A small Supreme logo hides underneath the corner of each eye-catching graphic.

Something for hypebeasts, too — Despite the hate from hypebeasts, Butthole Surfers’ Supreme collaboration doesn’t fall out of line with what the brand has presented before. The streetwear label has previously paid tribute to punk revival trends with graphic jerseys outfitted with Massive Attack’s ‘90s album Mezzanine and zebra-print Dr. Martens oxfords. Each was equally dissed by clout chasers.

To pacify hypebeasts this time around — and to treat them like the children they act like — Supreme will also drop a branded Nerf gun and Wham-O frisbee this week alongside its Butthold Surfers collab. All pieces of the collection are set to launch on July 1 at 11 a.m. ET through the streetwear brand’s website and in-stores.