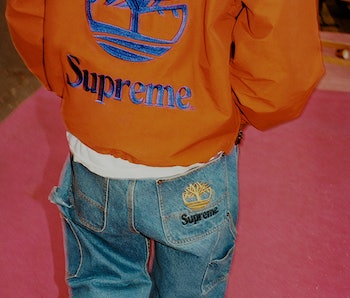 Supreme and Timberland are now corporate family after the former was acquired by the VF Corporation last fall for $2.1 billion. But even before the two brands were under the same umbrella, they had a long history of working together and putting out some of the splashiest boots you’ll ever see.

For their latest collaboration, strangely, Supreme and Timberland are completely leaving out footwear. A new capsule releasing this week is all apparel, no boots. And even though we’re well aware Timberland does more than just make boots, it still feels wrong to leave out what the brand does do best.

Among the lot is a pair of jeans that reinforces the current tide of denim, which is shifting to baggy after years of skinny’s reign. The double knee painters cut with massive pockets and dual-branded embroidery on the rear pocket should feel familiar to anyone who was around during the 2000s to see the absurdly big proportions of jeans. Part hip-hop, part skate, the jeans are a serious blast from the past.

What else is in store? — Matching anoraks and track pants, both with reflective taping, come in orange, purple, black, and white with contrast stitching. Indigo denim is actually just one choice for the painter's pants, which will also come in pink, black, and white. But best of all may just be the crewneck sweatshirts, coming in their own range of colors with striped trim highlighted by a burnt orange that University of Texas fans will go crazy for.

The accessory front brings two types of hats, six-panel camp caps with a mesh pocket, and beanies done up to match the crewnecks. The entire lot isn’t likely to generate much hype but shows what both Supreme and Timberland ultimately do best — high-quality goods worth every dollar for the years they’ll last.

Dropping this week — As always, Supreme and Timberland’s collab will release as part of the streetwear brand’s weekly drop at 11 a.m. Thursday, May 13. There’s a good chance the apparel remains available to purchase for longer than, like, 15 seconds, which is more than we can say about the Supreme mini-fridge also dropping this week.