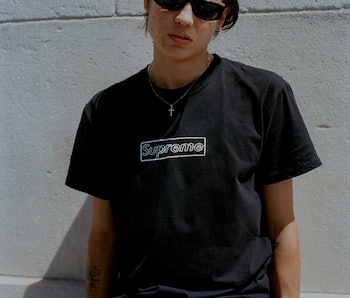 A simple chalk outline will set hypebeasts ablaze this week, as Supreme has confirmed the release of its collaborative Box Logo T-shirt with KAWS.

Despite working with Supreme since 2001, long before either party held their acclaim of today, this week will mark the first time KAWS has been given the opportunity to play with the coveted Box Logo. Their partnership kicked off with skateboard decks featuring the graffiti artist’s take on the Michelin Man, and seven years later they released a Kate Moss T-shirt through a collaboration with KAWS’ now-defunct brand Original Fake.

That tee was itself a spin on Supreme’s Moss-starring 10th anniversary T-shirt and served as a nod to KAWS’ origins in vandalizing street advertisements. Now that KAWS and Supreme are two of the most well-known entities in streetwear, the artists’ chalk outline Box Logo neither seems as considered as their previous work nor does it need to be. A rabid audience awaits regardless, and perhaps the chalk outline signals the hype-driven death of streetwear and is actually much more pointed than it seems.

There’s other tees, too — All that’ll matter to most Supreme and KAWS devotees is the collaborative T-shirt, but it’s just one of the seven releasing as part of the streetwear brand’s seasonal graphic tee lineup.

Two other artists come into the fold through Jamie Reed, who’s championing anarchy with his T-shirt, and Clayton Patterson. Known best for his documentation of New York City’s Lower East Side, Patterson’s original artwork on a longsleeve tee references tattooing, which he played a major role in getting legalized in the city in 1997.

A photo of Augustus Pablo, the late roots reggae and dub producer, adorns another T-shirt that’ll hopefully draw more attention to his legacy. Rounding out the lot is the “Does It Work?” T-shirt in comic art, a cartoonish snake, and a “Milano” tee arriving just after the opening of Supreme’s first Italian store in Milan.

Do you know the drill? — As always, the T-shirts will release as part of Supreme’s weekly drop at 11 a.m. EST this Thursday in-stores and online. Each will likely sell for the standard price of $38, with the resale value skyrocketing most for KAWS’. But while others are chasing the literal statuesque figure of streetwear, those who truly love NYC will be well served picking up Patterson’s T-shirt with ease.