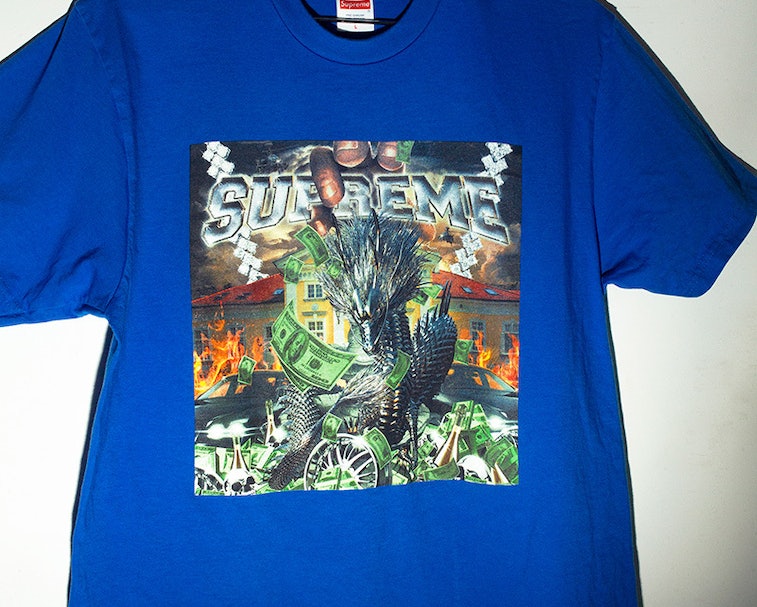 One of the most anticipated drops of each Supreme season is its seasonal lineup of graphic tees. The offerings can be hit or miss depending on the year, but for SS20, the lineup is strong. Each of the seven T-shirts is solid, but the biggest hit will have to be the one that looks just like a Pen & Pixel album cover.

Pen & Pixel was the graphic design firm behind the most classically ridiculous album covers of the '90s. Picture a Cash Money or No Limits album: that's Pen & Pixel. Under Supreme's direction, the pseudo album cover features the standard lineup of cash, cars, diamond, a mansion, and the arched block letters. At the center of it all is a dragon — because you've gotta go all in if you're doing a Pen & Pixel joint.

Breaking down the rest — There are several tie-dye versions of the T-shirts, including some with the treatment confirmed for the cartoonish dinosaur wearing an "S" logo, as well as the amorphous "Supreme" font featuring an asymmetrical, repeating print of tiger heads on the back.

A chrome logo tee offers the same gaudy sensibilities as the Pen & Pixel one, but more muted are an elementary sailboat painting and a countryside landscape photo anchored by "Supreme Time" on the top and bottom. Finally, there's a colorful nebulous that reads "Everything Is Shit," a relatable viewpoint, in small print. I am almost certain it's inspired by an album cover from a '90s band, and I'm driving myself insane in pursuit of the source.

Looking through them all, there's not a weak T-shirt in sight — something that can't always be said. That should also come as a relief if your favorite tee flies faster than the rest.

The weekly race — As always, you'll need to be quick to order through Supreme's website at 11 a.m. ET on Thursday. Because of the coronavirus, all Supreme stores are closed, and any online order above $150 comes with free shipping.

May the cop be with you.