Supreme is ready to take all your money with a $14,000 diamond watch 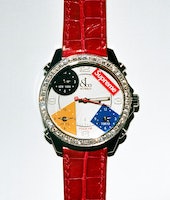 The starting price for the brand's timepiece collab with Jacob & Co.

Just when you think Supreme can't out-Supreme itself anymore with its over-the-top accessories, the streetwear king always ends up surprising you. This time around it's thanks to its collaboration with New York City-based jewelry designer Jacob & Co., which is working with Supreme on a set of diamond watches that cost more than a used Toyota Prius. And while the watches were revealed back in August, when Supreme dropped a seasonal preview that also included a Mortal Kombat arcade machine and a Pat McGrath Laps lipstick, it wasn't until Tuesday that we found out how much they're going to cost.

$$$$$ — Not surprisingly, considering that some Jacob & Co. watches go for over $1 million, the Supreme collab won't come cheap: The 40mm and 47mm Time Zone are priced at a whopping $12,000 and $14,000, respectively. As you would expect, these limited-edition tickers are stainless steel and feature more than 50 "brilliant" white diamonds on the bezel (52 on the 40mm, and 51 on the 47mm), alongside a lacquer dial and an alligator leather strap. Oh, and just in case you want to take them for a swim, they are water resistant up to 30 meters.

Good luck, as always — If you thought an accessory that costs upward of $10,000 would keep the hypebeasts away, well, you're wrong. Plain and simple. So if you're someone who happens to be a watch collector and wants to add Jacob & Co's Supreme piece to your collection, be prepared to face some competition. Let's not forget this is a brand that's used to selling out of $4,000 porcelain figurines in seconds, just as much as it can create insane buzz over a $30 clay brick.

Either way, for those of you who want to try to get one of these shiny, colorful watches, Supreme is dropping its Jacob & Co. collaboration on Thursday, October 22 via its online shop at 11 a.m. And you better not let those bots (or lucky humans) beat you, because you know resale for them is probably going to be around $20,000 — at the absolute least.