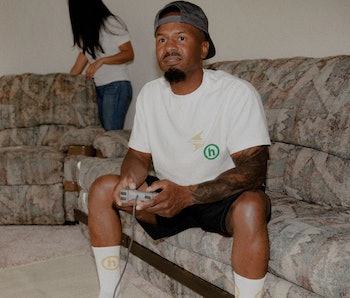 N.E.R.D. and Star Trak Entertainment have enlisted Hidden NY, one of the best archival streetwear accounts on Instagram, to celebrate both the 20th anniversary of In Search Of... and the formation of the record label.

Ahead of the capsule’s release, Hidden has recreated the iconic album cover with Shay Haley once again taking his seat on the very same couch. This time around, instead of a blank white tee, he’s wearing one with dual graphics from Star Trak and N.E.R.D. — as well as the Hidden crew socks that have become a hot accessory.

To celebrate the big year for Pharrell, Chad Hugo, and Haley, the capsule includes also includes co-branded hoodies, hats, and the mesh shorts that have become one of the most crucial men’s pieces for summer. While most of the pieces keep things clean with the simple logo placements, at least one of the T-shirts looks to have a more intricate graphic with a space probe exploring an extraterrestrial planet.

More on Hidden — Like JJJJound and many other curatorial fashion spaces, the mysterious forces of Hidden have become a veritable merch arm on their own. To date, no one knows who’s behind the Instagram account — one commentator on the Star Trak announcement theorized that it’s actually Hugo — but more than half a million people now turn to the page for curated vibes in streetwear, sneakers, and high fashion.

N.E.R.D., of course, needs no such context briefing as it’s just been one part of The Neptunes’ dominant cultural force over the past 20+ years. For fans of the offshoot band, this capsule is as close to a “must-cop” as you can get if you believe in such a phrase — particularly the black mesh shorts with green embroidery that turns Hidden’s suddenly ubiquitous logo into a ringed planet.

One day to launch — Star Trak and Hidden will release its merch in two phases tomorrow, June 15. First dibs will go to subscribers of Hidden’s newsletter at 12 p.m. ET, with a general release to follow through its website at 3 p.m. ET.

Hidden’s merch already flies fast, but the drop tomorrow should become even more rabid because of an N.E.R.D. fanbase that has essentially served as the proto-hypebeast. In other words, don’t sleep or the spaceship will take off without you.