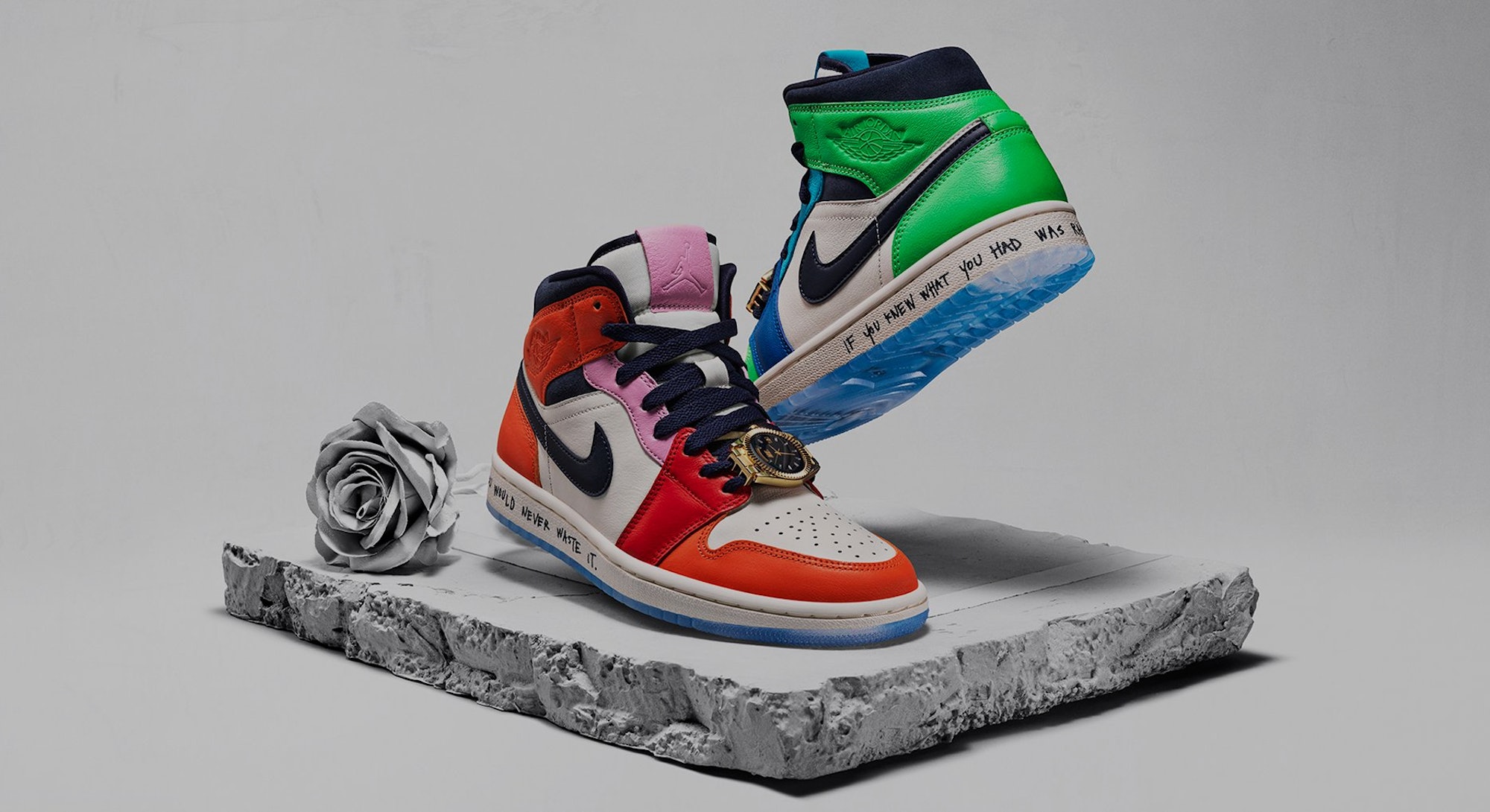 Since its inception, the sneaker game has been a massive boy’s club. But that narrative is quickly changing, thanks to a group of women who are trying to claim their power in the space with a basic human instinct: helping each other.

Women are sidelined by the streetwear industry at every point of entry, from the lack of women’s sizing in sneakers to a serious drought of female creatives behind the scenes. At times, women are even cheated when it comes to paying resale prices, with smaller shoe sizes often sitting at higher price points. Take the Stussy x Air Zoom Spiridon “Fossil,” for example: a men’s 10.5, the national average, is listed on Goat for $465, while a men’s 6.5 (or women’s 8.5) resells for a whopping $1,105.

On Instagram — the main culture pipeline for sneaker fans, collectors, and resellers — the dominant narrative is far from inclusive. Popular sneaker fan pages like Nice Kicks or KicksOnFire, with seven million followers between them, rarely feature female collectors or designers. Of KicksOnFire’s 270 Instagram posts since January, only five feature women. Under the latest one, highlighting Saweetie’s style, one of the most-liked comments says “actually a great fit for a girl.” Under Nice Kick’s International Women’s Day post, the first comment reads “Dishwasher appreciation day!!” Neither jab was called out for its misogyny, by the page itself or fellow commenters.

Despite the lack of recognition from brands and representation in media, the female sneaker community is thriving, thanks to a network of grassroots designed to be digital safe spaces. Online platforms, like “If I Can’t Wear Sneakers” and “SoleSavy,” are building protective digital hubs for women to connect and grow within the industry.

A women’s-only private Instagram that tracks sneaker drops, @if_i_cant_wear_snkrs was born after Christina Kenan missed out on last year’s Air Jordan collaboration with designer Melody Ehsani. Kenan started tweeting back and forth with another Ehsani fan she didn’t know, eventually sending her updates as the drop developed. The next morning, Kenan woke up to a Twitter direct message from the official Melody Ehsani account, asking for her and the other woman’s email addresses. Within the hour, they both received invoices for a pair of her Jordans. Not only was the interaction a testament to women supporting women, but it saved them from the ridiculous resale prices.

“I've seen women ask basic questions about sneakers, and get ripped to shreds by men.”

Inspired to keep the karmic loop going, Kenan formed her sneaker drop page. The first drop she covered on If I Can’t Wear Sneakers was the Melody Ehsani Jordan OG SKRS release, just one week after Melody Ehsani was in her DMs. “My information was mediocre,” Kenan said, “but I can say, I helped seven women get a pair of OGs that day.”

One year later, If I Can’t Wear Sneakers has nearly 2,400 Instagram followers, all of them women. Aside from her full-time federal job, she spends around seven hours a week researching sneaker drops. Under every product shot she posts, Kenan provides a rundown of the design, color, and a a sizing guide, and an exhaustive list of retailers in every continent.

Drop announcements are only the jumping-off point for Kenan’s primary goal: maintaining a safe community for women. She stresses that female sneakerheads are severely held back by lack — or denial — of education. While scrolling through the male-dominated Instagram communities, Kenan noticed women being mocked or even harassed for expressing any sneaker naivety.

“I've seen women ask basic questions about sneakers, and get ripped to shreds by men,” Kenan said. If protective, seasoned hypebeasts are gatekeeping the conversations around sneaker culture, they become a breeding ground for hostility and embarrassment. This traps women in a perpetual beginner’s mindset —unsure of the industry, but unable to ask for help. “Basic sneaker information, for someone who's just starting out, may not be so basic,” Kenan said. “A girl came to me in my DMs — a little embarrassed, I could tell — asking 'Is the SNKRS app and Nike app the same thing?' She was so thankful that I explained it.”

Kenan’s comments and DMs host an ongoing, open dialogue. Women ask about drop details, give opinions, or announce a successful purchase, and either Kenan or one of her followers (who she refers to as “my girls”) always respond. Free from the male gaze, their education stems from a place of genuine sisterhood. “I hope my page not only provides information,” she said, “but gives women a fighting chance by making them more knowledgeable.”

Anna Bediones, a multi-hyphenate creative and new director of women’s strategy at SoleSavy, echoes the ethos of power through knowledge. SoleSavy has emphasized the aspect of community since its 2018 launch, through memberships and a private Slack channel for sneakerheads. Under Bediones, the startup will launch a womens-only platform next month, starting with an exclusive Slack channel for female members. There, women will be able to swap drop calendars, ask questions about the industry, and connect on a more intimate scale.

“You don't feel like a part of the community unless you feel welcome in it.”

“Having a safe space, for women, encourages them to learn more about what they're getting into, and feel comfortable,” Bediones said. “That feeling is the entire essence of community — you don't feel like a part of the community unless you feel welcome in it.”

SoleSavy’s current Slack network, with members-only channels throughout major cities, currently has “Ladies only” threads that provide women with a micro-safe space. The Toronto thread that Bediones is a member of (as a sneakerhead first, SoleSavy employee second) has a spreadsheet with every member’s name, email address, and shoe size. The 30 women mark a monthly calendar with drops they’re hoping to buy, and if someone else gets lucky in a raffle or release, they pick up and ship sneakers to each other without any price markup. As resale becomes an increasingly toxic element of sneaker culture — one that’s built on financial or familial privilege — this selfless solidarity is rare.

Like Kenan and If I Can’t Wear Sneakers, Bediones points to education as the key to empowerment. Female sneakerheads’ lack of recognition, she says, comes from a toxic cycle of biases and double standards. “Women are placed under a different set of criteria to be a sneakerhead. It's almost like you have to pass some kind of sneakerhead test,” she said, after emphasizing that you do not have to own Jordan 1s. “A woman will get clowned if she's not wearing the hype-est thing, but she’ll get criticized for being a hypebeast if she only has the hottest collection.”

Informed confidence is the key to breaking these mansplaining and bullying traps, which she plans on building through technical savvy like buying strategies and a pivot towards personal style over hype. “We want to start with community first and foremost, equip women as best as possible to be successful in [the sneaker] space,” Bediones said, before adding, “whatever that looks like to them.”

If I Can’t Wear Sneakers and SoleSavy join a blossoming network of safe spaces, where women can learn about the industry and help each other thrive within it. They’re carved by women who don’t see themselves anywhere in the sneaker world — but they see each other. Female sneakerheads are building their own space where no space is given. The industry just has to catch up.