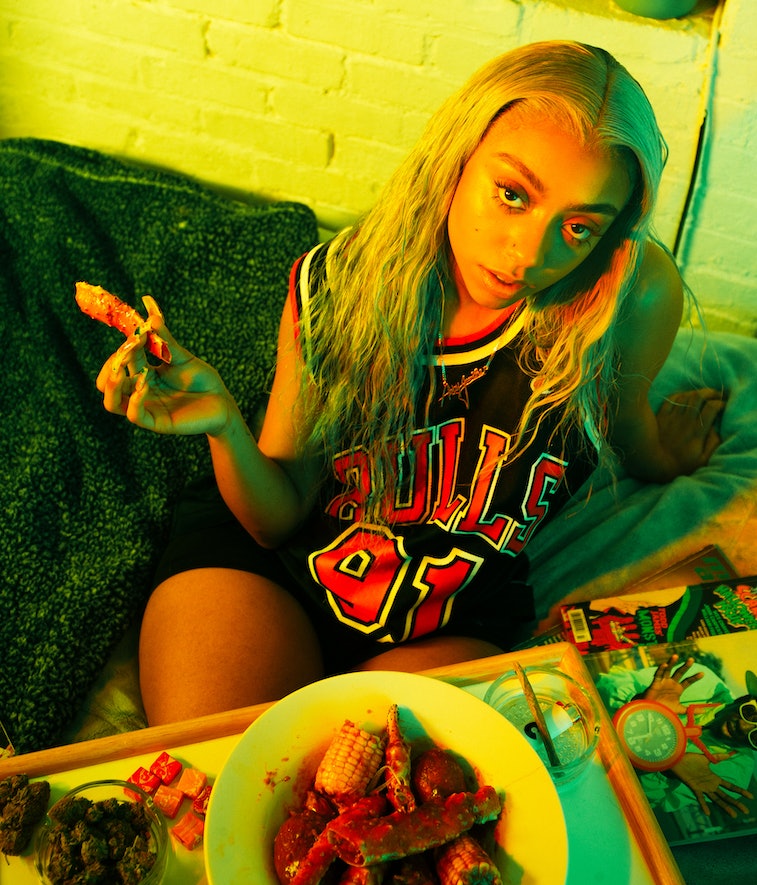 I'm a simple man: I see an all-black outfit and, most of the time, I instantly fall in love with it. But, at the same time, I always appreciate how different people style themselves — especially when looking fabulous isn't their only super talent.. Two of those individuals are Smoke DZA and Abby Jasmine, rappers signed to the record label Cinematic Music Group who live and breathe streetwear. So, if you want to trust anyone about what's hot in the ever-evolving world of sneakers, apparel, and fashion in general, they would be it.

Thankfully for you (and us), Smoke SZA and Abby let Input step into their creative mind to talk about where their style inspiration comes from, the streetwear pieces they're most into, and what's a pair of sneakers they don't own yet but hope to soon, among other things.

Often described as "The East Coast Snoop Dogg," Smoke DZA has collaborated with artists including Kendrick Lamar, A$AP Rocky, Wiz Khalifa, Action Bronson, Rick Ross, ScHoolboy Q, and Cam’ron, to mention a few. He says his fashion inspiration comes from being born and raised in Harlem, where he would look to "all the hustlers" who always looked as if they were in a music video. "That’s what growing for me in Harlem was like," Smoke SZA said. "One big music video with many cameos."

"When i was younger I really liked [Nike] Foamposites, but now I’m more of a comfort guy. I’m into New Balance 990s at this point. A great comfortable sneaker I can wear with designer sweatsuits."

"My rotation changes with my mood. My same approach for sneakers [is] pretty much my same approach with clothing. If anyone is a fan of Smoke DZA than you know Ralph Lauren was my style guide for many years. Right now, I’m more focused on wearing brands I own and brands that I’m friends with the owners. I’m wearing Smoker's Club because I’m part owner of that brand, so why not be a billboard for it, right?"

"I still keep a good Aimé Leon Dore sweatsuit on deck. So I guess a good sweatsuit is always in my rotation."

"A pair of grails I’m looking to cop is the Dior Jordan [1s]. (Sidebar: I still hate Mike [Jordan]. It’s more of a Dior/Nike thing for me."

22-year-old Abby Jasmine is already taking the rap world by storm, thanks to her dreamy R&B-meets-soul vocals and a charisma that stems from her New York City roots. Her latest project, dubbed "Who Cares?", is the perfect emblem of her Big Apple personality and, perhaps most importantly, her potential as an artist. No surprise, considering she comes form what's arguably the mecca of streetwear, Abby Jasmine's style is also impeccable — which comes from "wanting to be comfy and fly at the same time."

"I wear them literally everyday. They’re my favorite shoe."

"As of right now, I always got my Telfar bag on me. It’s big as hell and fits everything I need in it. Laptop, weed, wallet, keys, food. Literally anything."

"When I first bought them, a lot of people told me they were ugly. But, the more I wore them, the more I got compliments."

"My boyfriend went to this thrift store a while back and brought me home this random ass Nick Jonas shirt. I've loved the Jonas brothers since I was little, so It’s one of my favorite shirts. I wear it around the house on some cozy shit or sometimes I’ll wear it with a fly ass pair of pants and shoes and try to dress it up. I’m actually wearing it right now."Editor's note: Style may vary.

"The Travis Scott Dunks are gonna be mine one day."