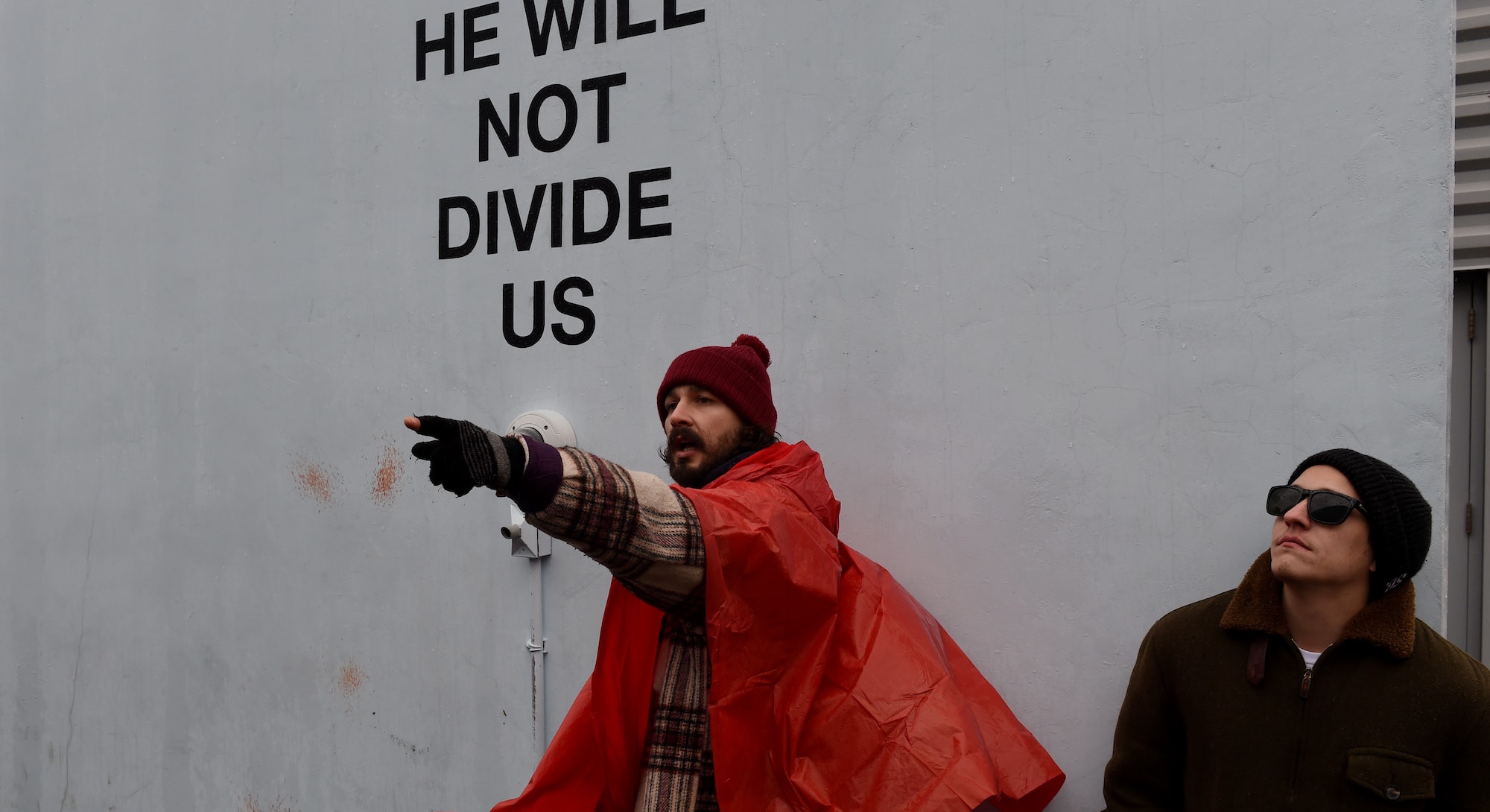 In a spur of the moment decision in 2017, Bobby Whigham decided to create an Instagram account called “Shia’s Outfits.”

The premise behind it was unapologetic and straightforward: He wanted a page dedicated solely to Shia LaBeouf’s style, one that would highlight the tight, cropped jeans, combat boots, and vintage t-shirt aesthetic that have turned the actor, filmmaker, and artist into a streetwear icon.

Whigham, a 35-year-old working in fashion in New York City, says Shia’s Outfits was born that year after friends saw pictures of him at a barbecue and compared his mountain-inspired looks to LaBeouf’s. “My dad lives in Vermont, and I have three younger brothers that, when the account came out, all lived in Vermont,” he told Input in an interview. “They are just the epitome of function but still have their own cool way of doing it. The weather, they have the seasons up there — rain, snow. From the protective jackets to waterproof boots, to just different ways that they layer up outfits.”

While Whigham knew who LaBeouf was before coming up with Shia’s Outfits, he is the first to admit he wasn’t the number one fan of the Even Stevens actor and Honey Boy writer. But his friends’ thoughts stuck with him so much, he said, that he became more intrigued and interested in LaBeouf’s outfits and was ultimately surprised by the fact there wasn’t an Instagram account that had an archive of them. So, seeing an opportunity, he decided to make his own.

“It was a Sunday. I had nothing to do,” said Whigham on when he made Shia’s Outfits. “I just started going on Google image search, which led me into some fan forums. There [are] a lot of Japanese websites devoted to Shia's older style during the Transformers era, and I just started collecting these images and posting them, and people just really caught on quick. It was fascinating.” Since April 8, 2017, when Whigham posted the first picture on Shia’s Outfits (in which LaBeouf is wearing military gear), the account has amassed more than 160,000 followers — one of whom is none other than Virgil Abloh, the Off-White founder and artistic director of Louis Vuitton’s menswear.

“And he did. He took all my fucking clothes.”

Shia LaBeouf’s fashion influence transcends his celebrity status. His style — which is often referred to as “normcore” or “blue collar,” with a combination of athleisure — is admired by the likes of Kanye West, who is known to have gracefully accepted LaBeouf’s hand-me-downs in the past. In 2018, LaBeouf told Esquire that, after West visited his house to discuss possible collaborations, the Yeezy creator basically raided his closet. “Around the same time, I took my mother to his concert,” LaBeouf said in the interview. “She is, of course, obsessed with Kanye West. When I brought her backstage, he was a fucking sweetheart to her. And it just felt fair. So I’m like, ‘Go for it, my guy. Take everything you want.’ And he did. He took all my fucking clothes.”

LaBeouf isn’t the only famous individual worthy of fandom on Instagram. Another celebrity who has become a legend in the streetwear community is Jonah Hill, the actor and director who loves to drip himself in Supreme, Palace and, of course, Adidas — a brand he’s now working closely with on a series of different projects, including his own sneaker collaborations.

“Jonah Fits” was started in June of 2017, not long after Shia’s Outfits, with similar intentions. It was to be a one-stop shop for people who wanted to look at nothing but what Hill was wearing on a regular basis. Ryan*, the creator of Jonah Fits who’s in his mid-20s and lives in New York City, says he was in a similar boat as Whigham. He noticed people on the internet were starting to have an interest in Hill’s style, and yet no one had created a dedicated Instagram page just for that. Much like Whigham then, he figured he’d seize the moment.

“I was like, ‘Huh, this would probably be a pretty easy account to create and maintain.’” Ryan said to Input. “And the fact that I was interested in it led me to believe that there would be at least a small appetite for that kind of page.” Again, akin to the thought process that went into Shia’s Outfits from Whigham, Ryan says he “did a bunch of Google searches and went to some articles that were highlighting [Hill’s] style and saved them all.” After that, he said he “made a few posts and tried to make some funny captions, or some captions related to his quotes in movies, to get people to think this is a pretty friendly and funny account.”

“I just knew people are into his style, and I'm into it too.”

Ryan says that, while he’s definitely a fan of Hill's, he wouldn’t say he’s his favorite actor by any means. “I just knew people are into his style, and I'm into it too. So that's why I created the account,” he said. “I definitely am into menswear and fashion and style, but I would not compare my taste to his at all. I consider myself a much more traditional sort of dresser, and he is much more experimental. Some of his looks, I'm like, ‘This is crazy. I would never wear this.’ But he pulls it off well.”

The similarities between Shia’s Outfits and Jonah Fits are clearly there, but those stretch beyond the Instagram photo grid and onto the people who are behind the actual accounts. Ryan and Whigham have another thing in common: They both said they didn’t create their “fit” pages to make money or become some sort of social media influencer. Although it can take hours of work a week to keep Shia’s Outfits and Jonah Fits up to date with the latest outfit pictures of LaBeouf or Hill, Ryan and Whigham haven’t quit their day jobs to do this full time.

People may think that having thousands of followers on Instagram could translate to having a fully fledged business, but that’s not always the case. “Simply for fun,” said Whigham about his purpose for Shia’s Outfits. “I haven't really made a penny off of this account nor do I feel extremely comfortable making money off someone else’s look, appearance or likes.” Whigham did say he has made and sold Shia’s Outfits merch in collaboration with the brand RXMANCE, but that’s as far as he’s tried to monetize the account.

Ryan, meanwhile, says he doesn’t want to spam his more than 22,000 followers with advertisements or paid partnerships they didn’t sign up for. “It's not like I need the income from this account,” he said. “I try to respect the fans in the way that they're following me for pictures of Jonah Hill dressed, not necessarily to be advertised to. I think back to the line in The Social Network, where they're thinking about putting ads on Facebook, and Justin Timberlake’s character is like, ‘You're throwing this awesome party, and you want to shut it down early sort of thing.’”

Ultimately, all Ryan and Whigham want to do is quench people’s thirst for Hill and LaBeouf’s outfits, and considering everything terrible that happens on social media, they’re doing it in a harmless way that shows what apps like Instagram can be good for. Fit accounts are, in essence, the new celebrity blogs. And when people on Instagram aren’t looking at pictures from their friends and family on their feed, they’re more likely than not on the Explore tab running into and perusing pages like Shia’s Outfits and Jonah Fits.

The craze for these types of accounts spans a wide variety of genres, from NBA players to the Olsen Twins. “NBA Fashion Fits,” for example, simply posts pictures of NBA athletes’ outfits and has over 75,000 followers and counting on Instagram. Other accounts like it can have as many as 500,000 to 1 million followers, particularly those dedicated to celebrities such as Kylie Jenner or Kim Kardashian. There are legal concerns that these fan pages are benefiting from photographers' intellectual properties, though that may not come into play unless people like Ryan and Whigham are actively trying to make money from pictures they don’t own.

According to Instagram’s help center, "Before you submit a report of copyright infringement, you may want to send a message to the person who posted the content. You may be able to resolve the issue without contacting Instagram." That’s the reason you will see many fan or celebrity accounts have messages like “Please DM if you’re the photographer or own these images” on their profile bio. Ryan and Whigham said they’ve never run into any takedown notices, personally, but that it is something they think about from time to time.

A spokesperson for Facebook told Input that, in order to comply with its policies, fan accounts must also make it clear they are not the official presence of a public figure, brand, or entity. The company said these pages can do this by specifying in the username or bio information that they are a fan account. In addition to that, Facebook said, fan accounts that claim to be “official” fan accounts must have an affiliation with the public figure, brand or entity in question. Otherwise, it can be removed under its authenticity and impersonation community guidelines.

“It sort of crescendos with getting to meet him.”

Whigham and Ryan may not be making money off Shia’s Outfits and Jonah Fits, respectively, but there are perks that come with running a hyper-specific celebrity page. While Whigham says he hasn’t had a chance to rub elbows with LaBeouf, Ryan says he got the chance to meet Hill because of Jonah Fits and even got an invite to a screening of his Mid90s film in New York City.

“It sort of crescendos with getting to meet him,” says Ryan, and all it took was an Instagram account and a couple of years of filling it with pictures of Hill in gym shorts and a vintage tee, and more daring outfits like a pair of slacks together with a tucked-in NBA jersey. That’s just the kind of inspiration hypebeasts live for.

Editor's note: Ryan's actual name has been changed at their request.