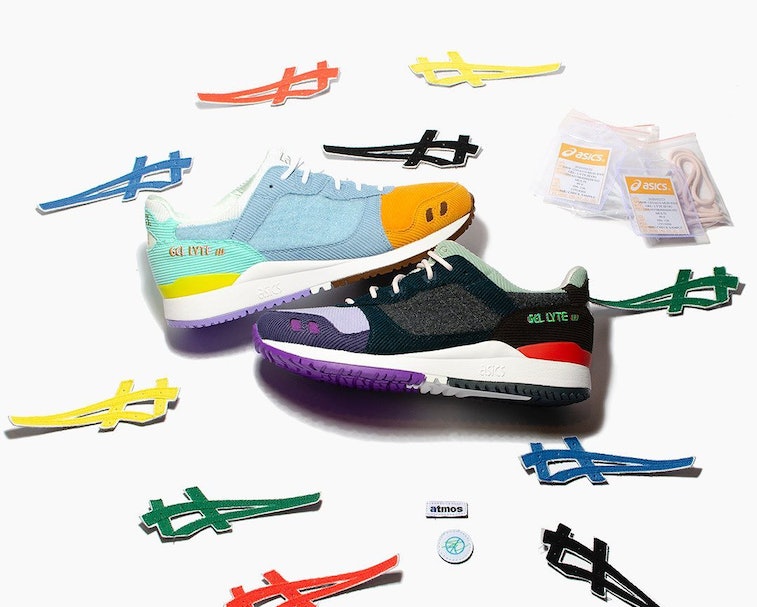 Round Two founder Sean Wotherspoon produced one of the best shoes of 2018 with his Nike Air Max 1/97 collaboration. Combining an Air Max 97 upper with Air Max 1 sole, the shoe features a brilliant stack of corduroy in seven colorful hues with interchangeable patches for the tongue. It could have signaled the emergence of an exciting new shoe designer, but his follow-up is just running it back all over again.

Last night, Round Two Los Angeles shared the most detailed look yet at Wotherspoon's new collaboration with Atmos on the Asics Gel Lyte III. Despite two new brands getting involved on an entirely different sneaker, it feels like more of the same — vivid patchwork corduroy and more interchangeable patches. With even more colors and patches this time around, it may as well be 2 Sean 2 Wotherspoon. It's not fresh enough to get too excited about, and while one could argue Wotherspoon is honing a signature aesthetic, I'd say he's leaning on a crutch. It doesn't help that the Gel Lyte III has been tinkered with so much already over the last decade, with more than two dozen variants alone coming from Ronnie Fieg and KITH.

Zooming in — This particular pair is a sample, which will be given away to the winner of a drawing contest, so it's possible more tweaks are ahead for the unannounced release date. The shoe is mismatched, a night-and-day take on the patchwork concept featuring 15 colors on the uppers alone. For customization, they also come with five different colored Asics logos on velcro, in addition to two more logo patches and a few more pairs of laces. If the idea was to go overboard, its a success — but to what end?

The hype must go on — Given the largely uncritical hype cycle, I have no doubt the Wotherspoon Asics will be a success. They'll sell out quickly whenever the release date comes, and resale price will be some measure higher (although likely not as high as the Air Max 1/97, which can fetch more than a grand.) There's little reason for Wotherspoon to switch the style up. Dissenting voices like mine can be written off as "haters."

But hey, at least his Adidas collab in the works doesn't feature more cords, even if it's just a "Round Two Sports" stamp on top of a Samba made with old materials.