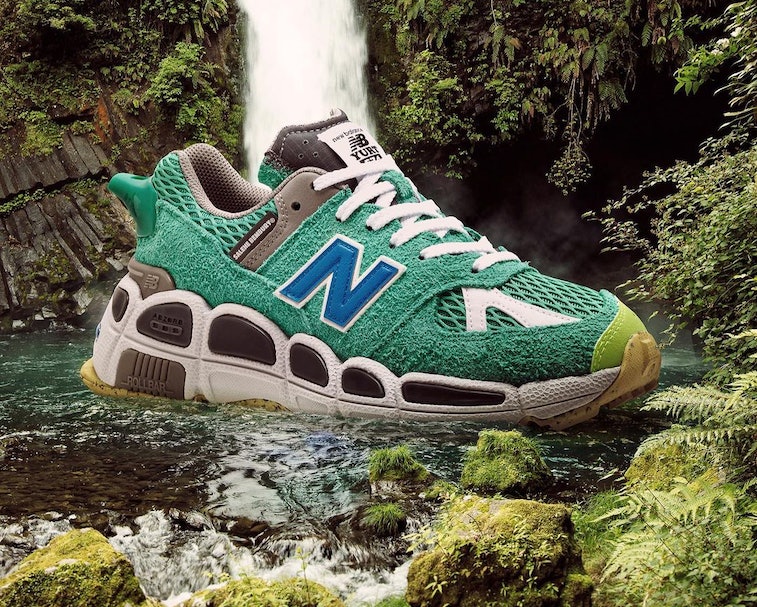 Salehe Bembury is an outdoors guy. Late last year, the designer and New Balance launched a “Universal Communication” collection that included two 574 “Yurt” sneakers and a run of accompanying apparel. A second drop followed in March, bringing in a wider of outdoor gear adorned with his signature fingerprint motif.

Now, the third chapter of the collection has been revealed to include three more pairs of 574 Yurt sneakers perfect for the outdoor (or Bembury) enthusiast.

Gear up — Delivered in aqua green, cream/hot pink, and dark gray/blue, each pair takes inspiration from the great outdoors. The first of three, similar to his Water Be The Guide 2002R shoe, has blue-green uppers that feature mesh and shaggy suede, while the chunky heel offers some trail-ready comfort. The cream and hot pink pair is more reminiscent of New Balance’s dad shoes, appearing with a cream base and hot pink and purple accents. Following a similar recipe to its aqua counterpart, the darker pair uses gray as its main shade atop the chunky sole.

Branding comes in the form of a Salehe Bembury tag near the collar and a special New Balance Yurt 574 tongue tag. The midsoles are bubbled in contrasting colors on the sneaker’s lateral side — which could trigger the minor trypophobiacs, as it did me. And don’t forget there’s always more than meets the eye when it comes to a Bembury collab. A built-in whistle at the heel allows for that hit of quite literal “universal communication,” allowing the wearer to call for help if they get lost.

While supplies last — Nearly every Bembury release thus far has been met with high anticipation and an immediate sellout. His Crocs collab from last year solidified his place as one of the more visionary designers of the moment, and other presentations from Canada Goose and the NBA nailed down his storytelling abilities.

Bembury’s second 574 Yurt drop is slated for a release at 9 p.m. EST this Friday, April 22, exclusively on his Be A Spunge website. You’ll have to act quickly given his popularity among sneakerheads, and those who are looking to get their hands on a piece of the latest New Balance collection may just be in for an uphill battle.