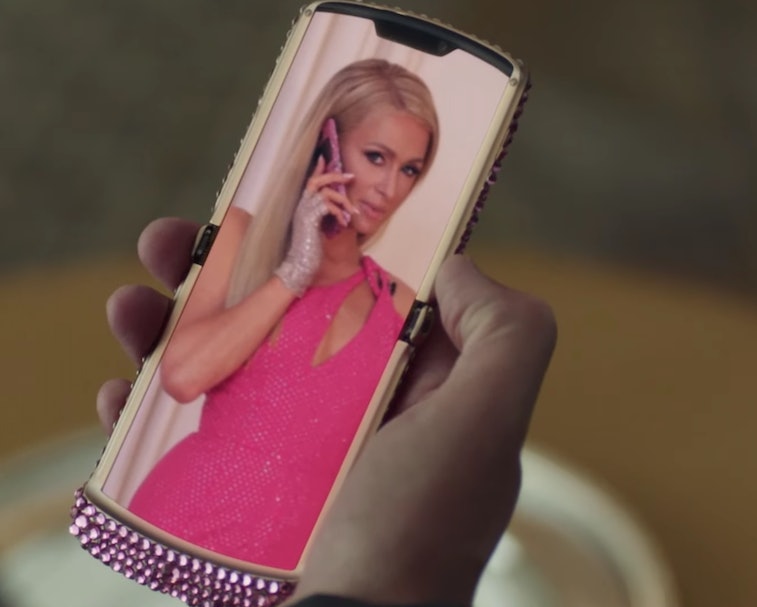 Fashion designer Christian Cowan is anything but shy. The glamour-loving designer is known for mashing up styles from different eras and embracing bright hues and all that glitters. For his Fall 2021 presentation, Cowan wants everyone to relive the delightfully tacky, shimmering, and unforgettable 2000s. In a collaboration with director Matthew Frost, Cowan has presented the allure of diamante case covers (remember those?), frosty eye makeup, a reminder of the importance of "being yourself," and — most importantly — a Motorola Razr and Paris Hilton throwback.

I've always felt ambivalent about foldable phones (I was a Nokia devotee back in the day) but this Cowan, Hilton, and Frost collaboration is the perfect blend of comedy, Motorola's chic design, and Hilton's status as the reality TV celebrity of the 2000s.

Bring back the noughties — While sharing his New York Fashion Week vision with Nylon Mag, Cowan explained that he wanted to breathe life back into the 2000s. "I wanted to modernize the spirit of the 2000s and give people what they’re currently craving: extravagance, glamour, irony and over-the-top fashion," he said. "The Razr was such a clear choice for the film and lookbook, as it symbolizes the iconic pop-culture moments we love with a modern fresh design. It’s sleek, it’s glamorous, it’s iconic and it connects us to our loved ones, which is exactly what I was aiming to portray in my NYFW film."

"You can’t deny," he added, "Paris and the Razr back together is a match made in heaven."

Other models appearing in the highly entertaining video above include internet celebrities, drag queens, and, well, actual models. It's a suitably eclectic mix for a campaign with NYC as the backdrop.

Is this Razr's actual comeback? — In February 2020, Motorola hyped up the return of its Razr, which was supposed to bring foldable phones screeching into the era of the smartphone. It was hoped those whose nostalgia was stirred up by the signature "Hello, Moto" ads would leap at the chance to combine memories of their youth with new-age functionality.

The result, however, was an over-priced, poorly made disappointment. Our tester had performance issues, the display developed serious problems, the camera was painfully average, and we couldn't get past the $1,500 price tag.

Have those issues been addressed for this collab? It doesn't really matter, because we're not going to buy it anyway. All we're here for is the reminder of simpler times... and the bling. I mean, just take a look at those purple pajamas. "That's hot," as Hilton would purr.