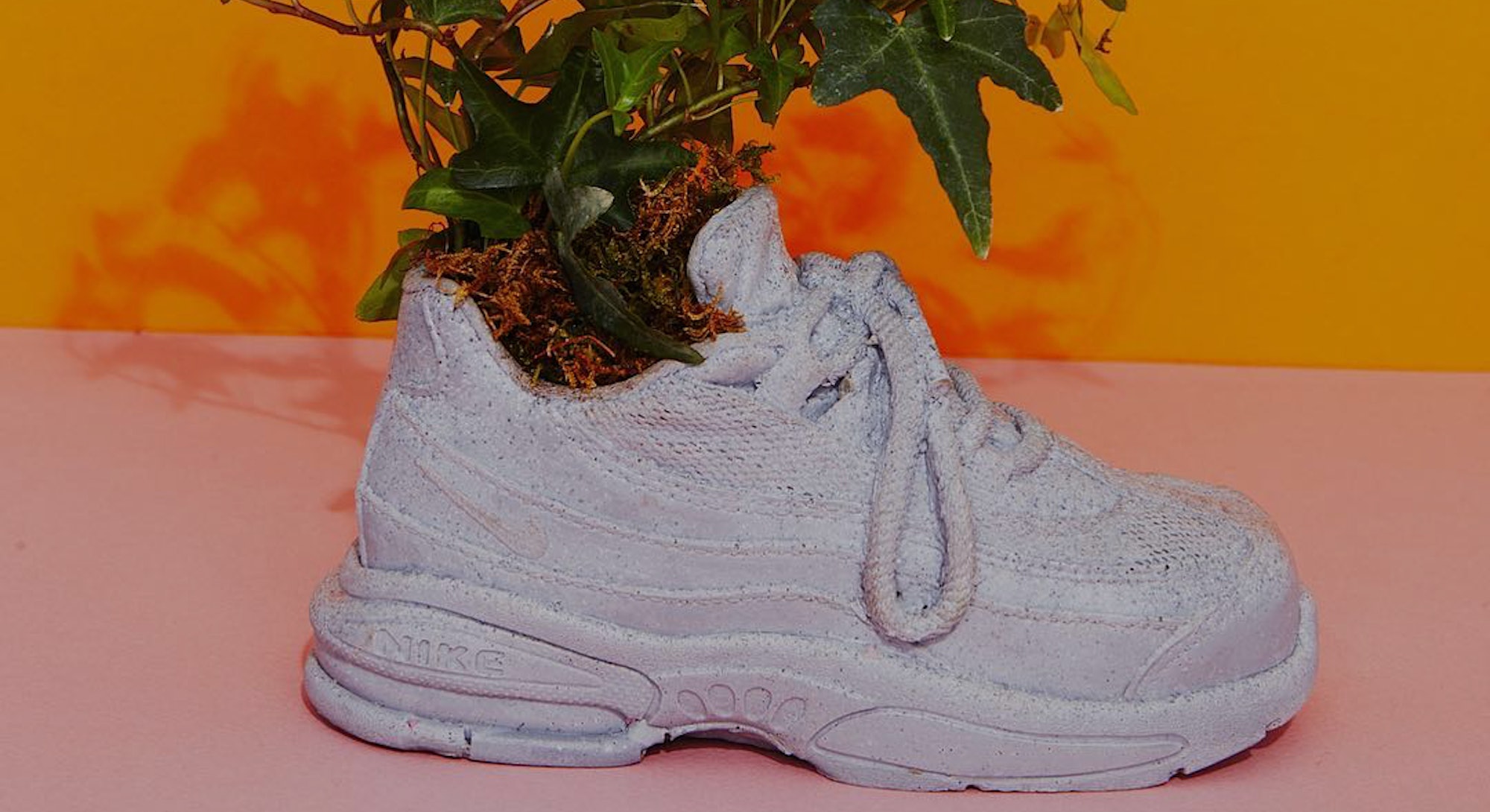 Streetwear is blooming — and that's not hyperbole.

From an aesthetic standpoint, streetwear has been embracing earth-friendly designs lately, starring two-dimensional houseplants and cacti. Plant-centric graphics have been bubbling among tastemaker brands for a few years, but the trend was given a seal of approval when actual plant stores started tip-toeing into the streetwear scene. Los Angeles’ famed Cactus Store, for example, partnered with Online Ceramics for a “Play With Soil” Earth Day T-shirt.

In 2017, Neighborhood collaborated with Invisible Ink on a line of thousand-dollar ceramic planters. The brand’s founder Shinsuke Takizawa then launched a fully-functioning Tokyo greenhouse under the brand, called it Specimen Research Laboratory, and designed what are probably the only gardening tools to ever warrant drop date announcements. Then, in 2018, Supreme dropped a live cactus keychain in its spring / summer collection, complete with ventilation holes and care instructions.

“I want it to be affordable for people that are into plants.”

It seems silly to dub something as eternal and immovable as nature a “trend,” but the uptick of flora in streetwear isn’t exactly natural. With epicenters in skate and hip-hop hubs like Los Angeles or New York City, streetwear is typically associated with the vibrance and hustle of urban jungles, rather than actual ones.

While streetwear and horticulture have never been mutually exclusive — no one’s stopping hypebeasts from buying a succulent, and botanists can pack just as much drip as the next guy — they are certainly starting to blur. This is largely thanks to a group of creatives in these spaces who permanently float between these two worlds, and work hard to marry the best elements of both of them.

Olivia Rose decided to study landscape architecture at Cornell because, being born and raised in New York City, her familiar landscape was architecture. “I was always fascinated by the idea of built nature,” said Rose. “To me, the natural environment was always something that was designed and defined ... buildings and streets felt like organic spaces, and nonorganic spaces felt like parks.”

Between post-grad jobs at floral studios and city planning firms, Rose fed her hands-on creativity by molding resin planters. While looking for objects to use as molds, she turned to her closet for inspiration — which, thanks to her lifelong love of sportswear, led to the first of her now-instantly recognizable sneaker planters. Rose’s homewares blurred the lines between art and fashion, with a cheeky quality borrowed right from their Manhattan backdrop.

“I see the plant world through kind of an anthropomorphic lens,” said Rose, “If the plant is a character of the city, how does it see itself?”

In 2016, Rose started posting her handmade planters on Instagram, and they quickly attracted a following. By 2017, she was managing Bodega Rose full-time, and even launched a line of T-shirts and tote bags to fund her growing arsenal of sculpting supplies. Rose’s Nike Air Force 1, Balenciaga Triple S, and Margiela Tabi planters are now practically grails themselves, and she’s collaborated with many of the brands who sculpted her original muses. Just before lockdown, she was on a world tour of planter-building workshops with Nike.

Despite the growing clout around her products, Rose sees them as a window into the sentimental undercurrent of streetwear. She says that the fact her products have struck a chord has nothing to do with the sneakers themselves, but rather their emotional value — a glaringly uncommon mindset in the face of today’s resale culture.

“Plants are the environment, let's bring them into this commercial world, where these items have such strong sentimental value,” said Rose. By combining the inherent attachment of nurturing a plant with the commerciality of streetwear, Rose amplifies the emotional ties that keep sneaker culture alive: “The idea of someone caring for these objects, you're truly watering your favorite item… and seeing something that you love in a different way.”

While Bodega Rose uses plants as a connection to streetwear culture, Hunter Martinez found them as an escape.

Cactus Quest began five years ago as a way to connect with plant people on Instagram, and branched into a digital cactus shop with surprisingly cool merch — or perhaps unsurprisingly, considering that Martinez spent four years at the helm of his own streetwear brand. Although he’s a lifelong creative with deep roots in the streetwear community, his growing family brought a major shift in priorities.

“The streetwear culture for me… I'm a father now, so it's a little hectic,” said Martinez. “As I spent more time at home with my family, I really started to spend more time with my plants.” It doesn’t take a life milestone to find this relatable in 2020, as people are forced to stay inside and interact with their homes like never before.

Martinez has always admired plants (he credits smoking weed on his mom’s cactus-filled patio as a catalyst), but once his domestic shift sparked a deeper interest, he scoped out local cactus clubs. Upon arrival, he realized that the clubs’ elder scene resulted in a serious lack of 21st-century amenities, like social media or anything resembling merch.

Not long after his first Cactus Quest post, Martinez’s designer instincts kicked in, and he started pushing stickers of his new logo. Upon heavy request, this snowballed into a line of psychedelic T-shirts, with cacti front and center. “The brand that I had before was very streetwear, very controversial, and a little antagonistic. That's just not where I'm at in my life these days,” he said. “With Cactus Quest, I can still design things, and have that feel of dope streetwear graphics, but it doesn't have to have the same elite feeling.”

Cactus Quest clothing does carry the sleek graphics and groomed aesthetic of an experienced designer — but, peppered with Latin classifications and regional species, it is undeniably a tribute to the plant circles he now runs in. It’s also very intentionally accessible, with prices capping at $40.

“I want it to be affordable for people that are into plants,” said Martinez. “I want it to be accessible for everybody, which I think is a different approach from classic streetwear, which creates scarcity so it can be super expensive and desirable.”

In evolving from Martinez’s industry past and embracing his botanical present, Cactus Quest is, ironically, tuned into the roots of streetwear. With clothing as the medium and plants as the message, Cactus Quest both unifies and represents a passionate community. This inclusive heartbeat is shared by everyone standing at the intersection of plants and streetwear, a thriving community in itself. Whether they’re used as a connection tool or an escape route, whether they’re screen-printed or alive, the everlasting emotional value of plants might be just the breath of fresh air streetwear needs.