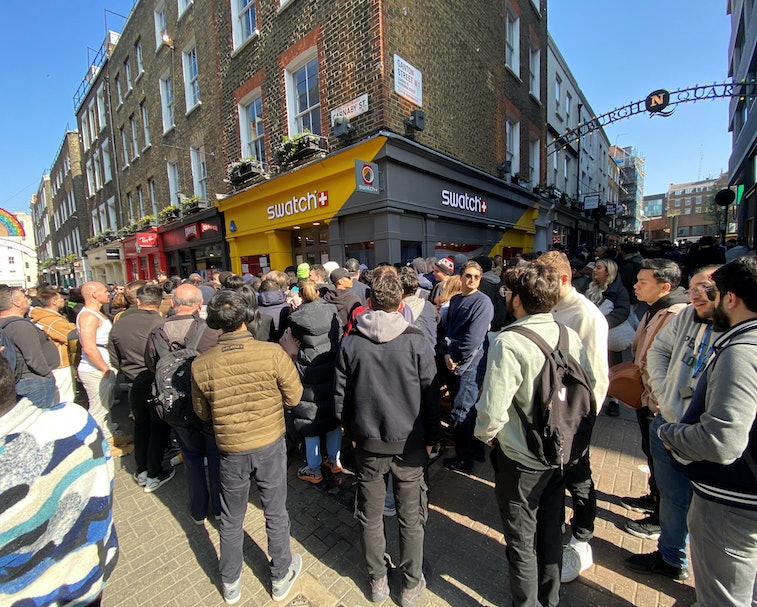 Astrology-themed merchandise may be a hot commodity in the shopping market, but Omega and Swatch’s MoonSwatch collaboration caused actual retail chaos.

First released last weekend, the 11-piece collection of timepieces offered a fresh and affordable take on Omega’s iconic Speedmaster Moonwatch. Calamity ensued as thousands of buyers around the world tried to get their hands on one — creating scenes usually only seen for streetwear or sneakers.

Omega’s original Moonwatch was built on the 4th-generation Speedmaster style worn by Apollo 11 astronauts during the first moon landing. Its $7,000 tag prices out many would-be collectors, and enthusiasts were thrilled to hear that a more affordable version would be made in collaboration with Swatch. A much more palatable price of $260 brought massive crowds to Swatch stores, many of which were overcome by aggressive customers.

Scramble for the MoonSwatch — Swatch was vague in its original communication surrounding the release, and some store employees said they only received a 100-piece inventory. The company first said an in-store drop would be limited to two watches per person, but a later announcement dropped the limit to one. The revelation that online sales would eventually follow also came late, and these factors combined to create an aura of exclusivity and an eventual frenzy.

Some people were posted outside of the shops as early as 5:30 am to secure their purchase, and many stores ran out of stock by 10 am. One buyer even took a flight from Vegas to LA and waited 22 hours in line, according to Hodinkee. Witnesses say most of the events started calmly enough, but many ended up out-of-hand without an organized line or system.

Police officers arrived to bring order to more than 1,000 people waiting to enter a store in Singapore, and Watch Enthusiast compared the herds of people pushing and running to a “zombie movie.” The Straits Times reports that one person fainted because of overcrowding, and a lack of organization by untrained employees is being blamed for aggressive behavior by shoppers. Swatch’s London location was also forced to close just 30 minutes after it opened because of surmounting health and safety concerns.

All this for a watch? — With a sub-$300 price, it’s understandable why there was so much buzz around the release. The new styles were modeled after Omega’s original and made with BioCeramic, a concoction of two-thirds ceramic and one-third bio-based plastic made from castor plant seeds. The collection’s cute planet designs, rare colors, and affordability made it a must-have for watch-lovers of various budgets, including and those who couldn’t have afforded an Omega in the past.

Swatch has made it clear this wasn’t a limited-edition release and stock will be replenished down the line, but some resellers listed their purchases for up to 10 times the retail price. As sneakerheads and streetwear fans know, brands that resort to “drop-style” releases run the risk of exactly this kind of frenzy as anticipation builds and tensions escalate.

For Swatch, the buzz will probably benefit the brand’s overall marketing and give the company a boost in refreshing its name among watch-lovers. But given Omega’s associations with luxury and a refined customer experience, the apocalyptic sights of release day probably weren’t what the brand had in mind.