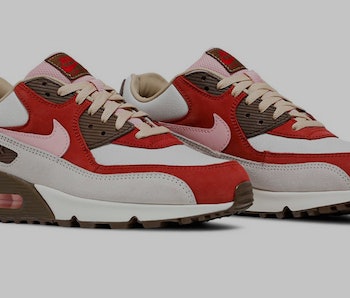 Nike is in the midst of cooking up — or perhaps, reheating — one of its beloved food-themed designs. The brand’s Air Max 90 “Bacon,” originally launched in 2004 alongside NYC sneaker boutique Dave’s Quality Meat, is now set to receive its first-ever reissue in 2021. While it can’t be eaten for breakfast, the retro sneaker — complete with original design cues — is sure to leave sneakerheads drooling.

With the success of other nostalgic releases, Nike seems to be following a money-making pattern. In addition to launching new shades of retro styles like the Dunk, the brand has a slew of re-releases ready to drop. Most recently, the Swoosh officially revived its 2000 Stüssy Air Huarache, and DJ Khaled let us know the brand also plans to re-release its collaborative 2006 Clot Air Max 1 “Kiss of Death” sneaker. Of course, none of these drops include the shoe’s original, cheaper pricing, and now we have to worry about copping retro kicks in futuristic — and sometimes dystopian — conditions. Let’s hope we can get a taste of this pork-inspired Air Max 90.

You wear what you eat — Dave Ortiz and Chris Keefe, owners of Dave’s Quality Meat, originally reimagined the Air Max 90 Bacon 17 years ago, and its 2021 re-release stays true to the nostalgic design. A white leather base lets red suede overlays shine, while a pink Swoosh and tongue add color and dimension to the delectable shoe. Pink hits can also be seen on the sneaker’s heel branding, whereas the tongue’s Nike logo comes dressed in red.

Complementing the red accents, a contrasting light gray covers the suede mudguards, while a white midsole keeps things crisp. Dark brown molds, seen dispersed around the heels and eyestays, help the sneaker in mimicking our favorite breakfast food. A ribbed texture on the brown sections only fuels our hunger for this Air Max 90.

Perhaps the most appetizing part of the shoe is its dark brown rear mold, which encases its soft pink Air units. We’re reminded of bacon’s fatty but flavorful taste just by looking at it, and much like the meaty dish, the sneaker’s midsole provides adequate taste.

Savor the flavor — The legendary 2004 release is set to drop later this year, with no official date from Nike just yet. It’s suspected, however, that this re-release will launch just before March’s Air Max Day celebration — when Nike’s other 2000s re-release is set to drop. Knowing sneakerheads are insatiable, it’s best to plan ahead for this DQM X Nike Air Max 90, especially as appetites grow with time.