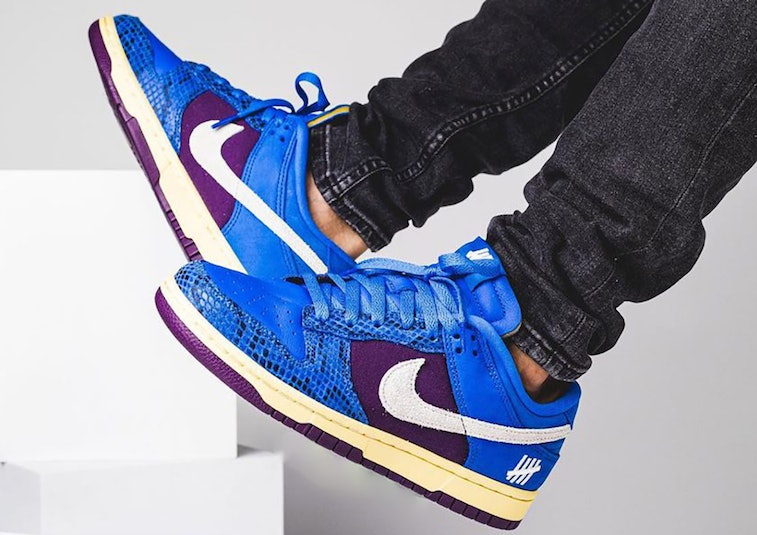 Nike helped build hype for its Dunk silhouette last year by re-releasing coveted designs from the 2000s — and an upcoming collaboration suggests the nostalgic pattern will only continue throughout 2021. Undefeated, a regular Nike partner in the 2000s, is coming back to the brand to release a throwback pack dubbed “Dunk vs. AF-1.” Per the title, the two are dropping Dunk designs inspired by their past Air Force 1 collaborations.

Undefeated isn’t an outdated brand by any means — it dropped a “Hall of Fame” Kobe 5 Protro sneaker with Nike just this month — but its upcoming Dunks are a callback to a time where bots, resellers, and hypebeasts were kept to a minimum. If it weren’t for the fact that most of Undefeated’s older collaborations are practically impossible to find online, we’d suggest they were easier to get than the new pairs.

The ‘00s are back — So far, we know the “Dunk vs. AF-1” pack consists of at least two pairs, each channeling past sneakers like the 2006 “Canteen” Air Force 1 and the purple “Inside Out” AF1 that dropped that same year. Both Dunk Lows play into the vintage theme by sporting yellowed midsoles, and nod to the two brands through co-branding on the tongue and Undefeated’s signature five strike logo on the lateral heels.

Taking a less obvious approach, the second Dunk Low utilizes similar colors to the “Inside Out” AF1, but doesn’t copy its design. Instead, the sneaker’s signature lavender upper has been translated into dark purple accents on the outsole and middle underlay, while its original blue hits have now taken over most of the upper. A suede white Swoosh and new black and blue snakeskin details at the forefoot overlays only differentiate the Dunk Low from the 2006 AF1 more.

More to come — An official launch for the “Dunk vs. AF-1” pack hasn’t been announced by Nike or Undefeated yet, but the latter confirmed to Sneaker News that a June release was to be expected. Stock of each sneaker will be highly limited, according to the publication. There’s hope for additional Dunk designs prior to the drop, though, especially as 2021 marks the 15th anniversary of Nike and Undefeated’s 2006 AF1 collaboration.