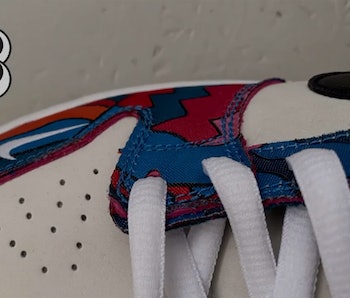 While rumors of a Parra x Nike SB Dunk Low have circulated social media for weeks, it was unclear if the speculation had any reasoning — until now. Thanks to a quick tease by Piet Parra himself, it’s confirmed there’s a Dunk in the works. Boasting a lighter foundation than Parra’s past sneaker designs, the new Dunk features groovy red, blue, and orange overlays, and seems to sport an altered, shortened Swoosh.

Parra — best known for his colorfully whimsical graphic motifs — is one of Nike’s most renowned collaborators, having worked with the brand since 2005. His previous team-up with the sportswear brand, in 2019, was his first time breaking into Nike SB. Together, the two created an exquisitely clean Dunk, featuring a funky graphic lining and replacing the panel swoosh with three tonal chenille-textured checks. Parra and Nike SB seem to have a more complex in store for their next Dunk, though, opting for more colors and textures.

The tiniest teaser — From what Parra showed on Instagram — which isn’t much — we can already tell the sneaker’s design contradicts what make-ups have predicted the shoe to look like. While sample photos show the Dunk with brown suede overlays, Parra’s actual model boasts a smooth cream leather base. Pictured on the toe, mid-panel, and likely the collar, the clean leather takes over much of the shoe — leaving no suspected suede to be seen.

What sample photos seem to have predicted correctly, however, are the sneaker’s graphic overlays. Swirling red, orange, and dark blue shapes add pop to the Dunk, coming in various sizes and outlines. The pattern stands next to a black Swoosh, which is suspected to be sized down into a miniature version.

Laces remain a neutral white to match the shoe’s base, along with possibly the tongue and heel branding. Not much else is visible in Parra’s teaser photo, so it’s unsure what we can expect from the back half of the sneaker, or if we can look forward to a mismatched execution.

SB release TBD — Nike SB has yet to confirm the Dunk, but regardless, sneakerheads are lining up for the anticipated shoe. With Nike hyping up the silhouette, and Parra’s notorious past designs, it’ll be difficult to cop a pair — but trust, you’ll have one of the most valued sneakers on the market.

As of now, sneaker insider YankeeKicks predicts we’ll see the Parra x Nike SB Dunk by the end of the year, if not sooner. We’re hoping either Parra or Nike — or better yet, both — give us another peek at the shoe before then.