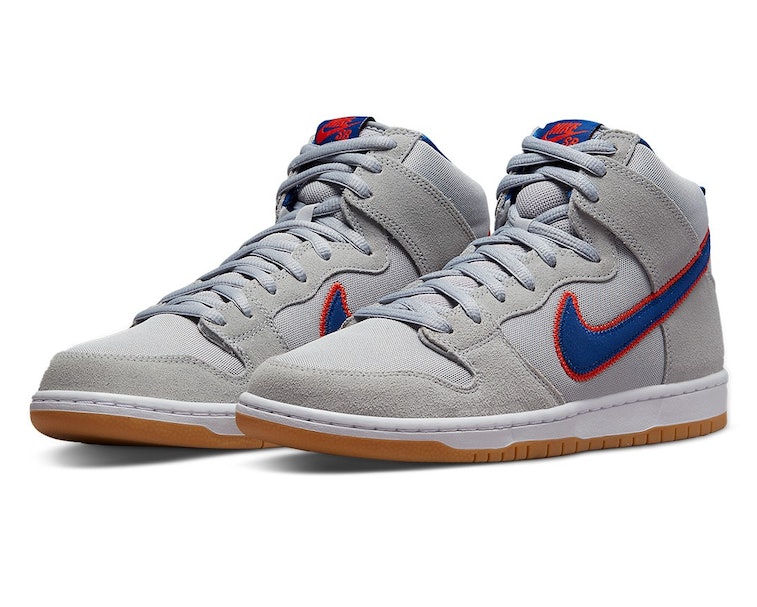 The MLB season is less than a week away, and, in preparation, Nike SB has made a Dunk High just for fans of the New York Mets.

Dressed in a color palette that mirrors the team’s away uniforms, the sneakers feature a light gray canvas upper and suede overlays of a similar shade. Sockliners, insoles, tongue tags, and Swooshes take on a royal blue tone, with the latter outlined in orange stitching. The same orange covers the “Nike SB” branding on the tongue tabs and the heel stitch details.

Game on — Mets lovers will appreciate the attention Nike SB has given to its team. On the inside of the left tongue is the purple logo for the 7 train, which many fans use to get to Citi Field. On the right, you’ll find an apple, paying homage to the giant fruit that pops up for home runs. The gum outsoles have just a hint of bubble gum pink — perhaps in a nod of Big League Chew.

Nike SB has paid tribute to two other MLB teams recently, including a Phillies Dunk Low and a San Francisco Giants Dunk High. The Swoosh has also honored a couple of MLB legends, as seen on a recent Jackie Robinson Dunk and a Ken Griffey Jr. and Sr. Air Force 1 from 2021. Just how far Nike SB plans on going in celebrating baseball remains to be seen, although it would be cool to see how the Swoosh incorporates more MLB teams and icons into its kicks.

The “New York Mets” SB Dunk High isn’t available yet, but it may very well release as an exclusive for local skate shops. Chances are it’ll drop early in the MLB season, so keep an eye out at your local shop for release details. In the meantime, consider grabbing a bacon, egg, and cheese to satiate your hunger.