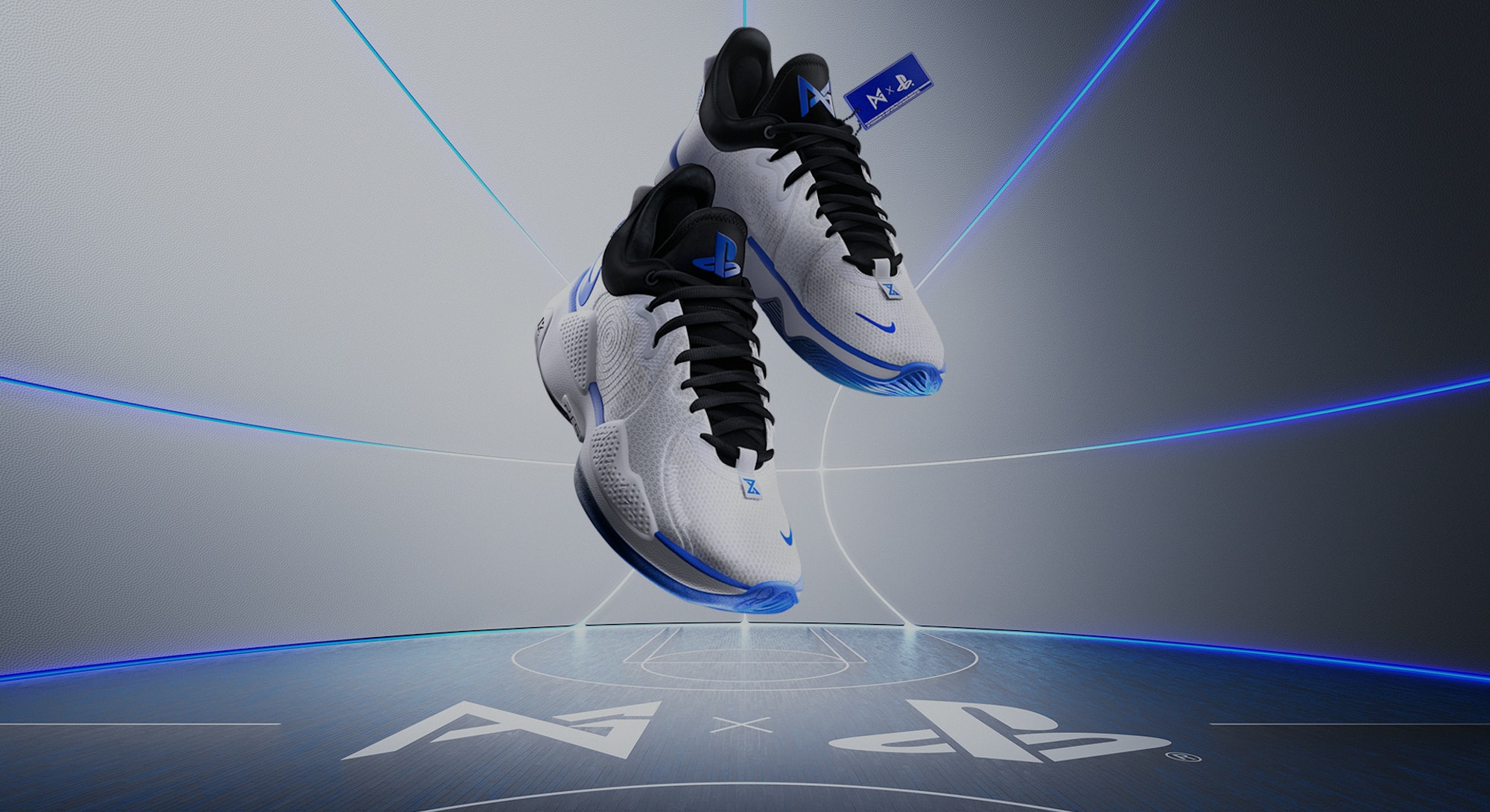 Before the PlayStation 5 had even been revealed to the public, a cutout piece of the console’s DualSense controller was shipped to Nike’s Oregon headquarters from Japan.

The reason? Sony and Nike were once again collaborating to create a PlayStation-themed signature basketball sneaker for NBA and Los Angeles Clippers star Paul George — this time with a design centered around the PS5, which Sony has sold nearly 8 million units of since it launched in November of 2020. Aptly enough, the new “PG5” marks the 5th edition of George’s Nike shoe, a total coincidence that made the naming scheme work out in everyone’s favor. It wasn’t planned for both products to come out around the same time; sometimes the stars simply align: PS5, PG5.

On the surface, the PG5 may simply seem like another exotic silhouette, but this particular collaboration presented its own unique set of challenges for both Nike and Sony. First, there was the COVID-19 pandemic, which made it difficult for the design teams from each company to work together in a physical setting. That meant plenty of Zoom video calls had to take place in order to bring the PS5 x Nike PG sneaker to life. Then, to make matters more strenuous, Nike approached Sony at a time when nobody outside the Japanese tech giant knew what its next-gen console look like. And we all know how Sony loves to keep those secrets close to its chest.

What helped during the process, though, is that Nike and Sony’s relationship dates back decades. The two brands have worked together on iconic shoes like the “PlayStation” Air Force 1 Low from 2006, which goes for as much as $60,000 on the resale market, as well as other pairs for Paul George. This includes a Nike PG with a PlayStation 4 DualShock controller theme and another designed after the original PlayStation, both of which laid the foundation for the PG5’s PlayStation 5 model.

Yujin Morisawa, senior art director at Sony Interactive Entertainment and chief designer of the PS5, told Input that one of the biggest challenges about this project was the fact he couldn’t be in the same room as Nike’s senior footwear designer, Tony Hardman, who’s in charge of the Paul George shoe line. Since he couldn’t show him the actual console or images of it, he had to verbally convey the artistic concept of the PlayStation 5 — which was key for Nike to capture as that was set to be its entire inspiration for the debut of the PG5.

“Usually, we are not able to send a sample like this.”

More specifically, Morisawa said he wanted Hardman and Nike to really get a feel for details like the texture and patterns being used across the PS5, such as the small PlayStation squares, triangles, circles, and Xs that are all over the DualSense controller. Those elements were, naturally, hard to show off with a webcam and over Zoom video calls, prompting Morisawa to eventually decide to literally cut off a piece of a DualSense controller and ship it to Hardman so Nike could have a reference point for the sneaker’s design.

“Usually, we are not able to send a sample like this,” Morisawa said about trusting Nike with a PlayStation 5 component before the console had been announced. “But this time I tried really hard and said, ‘I have to send it to them.’ So I cut [the DualSense] out so nobody could see which part it was and I think it helped them that we could actually send the sample to them before production.”

Morisawa added that although Sony was sharing an intellectual property secret with Nike, the same could be said about the sportswear titan, noting that having that mutual understanding and respect for each other is what ultimately made their latest collaboration feel effortless, despite all the hoops they had to jump through. “It’s rare that we share the concept outside our company before the launch,” he said. “But you have to be fair and there’s a trust in between. And, as a designer, we want to share what we have since they are also sharing.”

Hardman, for his part, said he doesn’t recall another time when he had to design a shoe without actually seeing the product that inspired it, as is the case with Nike’s PG5 and its PlayStation 5 color. “For me, that’s a first as a designer,” he said. “It was more [about] trusting what somebody is telling you.”

But what helped, Hardman noted, was that Sony and Morisawa were keen on staying true to PlayStation’s design ethos. “A lot of the elements [in the PG5 x PS5] are inherently part of their DNA,” he said. “Like the PlayStation symbols, things that were always going to be seen on their controller or console in some way shape or form, so we knew it’s a safe bet to bring those elements in to connect the DNA back to PlayStation, regardless of how the actual design of the console looks.”

We struck a nice balance with bringing in [PlayStation] elements in a unique way.

In addition to Morisawa sharing details about the PS5’s texture and the tiny PlayStation logos that encompass the DualSense controller, Hardman said also knowing about the coloration and glow of the console was extremely important to ensure that the shoe’s design matched it. And that certainly comes through in the PlayStation-themed PG5, which features a white upper with patent leather (where the DualSense PS logos live) and blue accents intended to mimic the PS5’s shining bright lights — including a special edition hangtag to commemorate the partnership. There are also the “PG” and “PS” logos on the left and right shoe, respectively, a touch that has been present on George’s previous PlayStation x Nike sneakers.

Once Hardman saw the PlayStation 5 for the first time, after the final version of the PS5 PG5 had been completed, he says he was amazed by the design. “The concept was cool. I was really blown away by the design, like how modern and futuristic it was,” he said. “I felt like the shoes reflected that, too. They’re still wearable shoes. You don’t want to wear consoles around, but I felt like we struck a nice balance with bringing in [PlayStation] elements in a unique way, separating from what we had done in the past and bringing something fresh that truly connected to the console.”

Performance-wise, since the PG5 is a basketball shoe after all, Hardman said the goal was to make it lighter and shave off as much weight as possible to make it feel “closer” to George’s foot. To do that, Nike carved out a lot of the rubber from the sneaker’s outsole and midsole, compared to the PG4, and gone is the strap that was on the previous version of the shoe. At the same time, however, he says it was equally critical to continue offering a silhouette that’s sleek and comfortable, thanks to cushioning technologies like the Air Strobel system that’s been used before in the PG collection.

Meanwhile, Morisawa emphasized how one of the aspects he and Sony cared about most was that the shoe would bring forward the PlayStation 5’s simplicity — all while being sexy enough to attract gamers and sneakerheads. “As a product designer, I wanted to keep the design simple,” he said. “But as a sneaker, there need to be many details when you wear the shoe. If you keep it too simple, it becomes a basic shoe.” Ultimately, Morisawa said, he was over the moon with the PG5 mirroring of the PS5’s white shell and DualSense nuances: “This is actually a dream come true. I had this dream that I wanted to collaborate with Nike, and the chance came so I love it.”

As for what George thinks of his PlayStation 5 PG5 sneaker, which drops in the U.S. on May 27 for $120 via Nike’s SNKRS app, he told Input he loves how they turned out. “It’s dope,” he said. “I love the clean, white design, and all the details, like the tiny PlayStation shapes along the shoe. It’s definitely one of my favorites.”

George went on to say that the PlayStation has been his go-to console since he was a kid, and that this collaboration between him, Nike, and Sony is “all about showing who I am and finding a cool way to connect with my fans.” He said he knows his fellow sneakerheads are also huge gamers, and these sneakers allow him to bring those two passionate communities together and creatively express his passion for video games and footwear.

Of course, George says none of this would be possible without Nike, Hardman, and now, Morisawa, who were able to turn the entire vision into reality. “They’ve done amazing work on every one of my sneakers,” George said. “We’ve worked on several PlayStation collabs together and they really understand how to create a design that represents who I am as a gamer.”