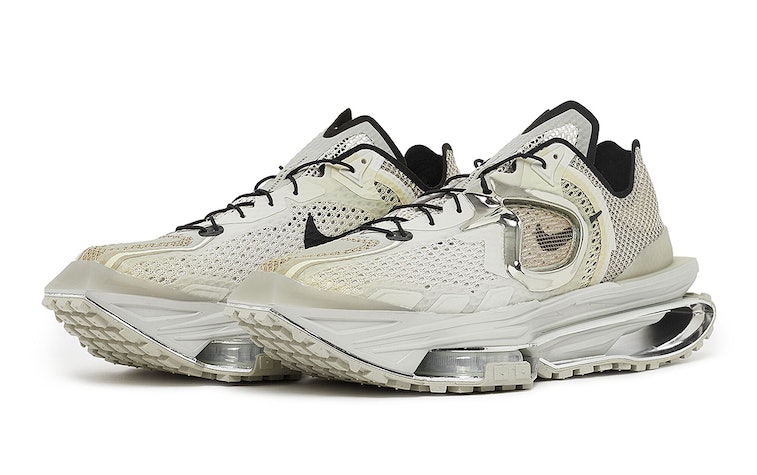 A lot has changed since Matthew M. Williams first unveiled his Nike MMW 04 sneaker in February. The founder of Alyx was appointed creative director of Givenchy in June, and Nike has since revealed and released the ISPA Road Warrior on which Williams' sneaker is based. As the year comes to a close, Nike will finally release Williams' take on the shoe worthy of Mad Max.

Like the Road Warrior, the MMW 04 features a beefy unit that takes inspiration from the Shox series while utilizing the company's relatively new Zoom cushioning units. Those pockets of air are limited to single units at the midfoot, reducing the profile from the double-stacked Zoom units from the Road Warrior. They're combined with full-length foam for cushioning, as well as Pebax plates that carry over from Nike's record-breaking Next% marathon sneakers. For the tread, Nike has used square nubs that roll over on the heel like an actual tank.

The upper of Williams' shoe is significantly less unusual than the Road Warrior, which is not a knock but means the MMW 04 should be easier to wear as part of an outfit.

Let's dig more into the upper — The largely mesh upper, which has been constructed with fused seams, is decked out with chrome overlays well in line with Williams' forward-looking techwear at Alyx. Rope-lacing makes the sneakers easy to tie in a cinch, although not quite as quick as the Road Warrior's buckle system.

The oddest detail of all has nothing to do with the MMW 04's bionic appearance. Three stubby stripes appear near the squared-off and rubber reinforced toe, and I have no idea how they made it out of the design room with its obvious relation to Adidas. What's next, a bootleg Swoosh on a pair of kicks from Nike's German rival?

Prepare to cough up half a rack — The bad news is that the MMW 04 will come with a price tag commensurate with the technology and Williams' offerings at Alyx and Givenchy. It'll retail for $450, which is just $50 less than the Road Warrior. What you'll get for all that money, though, is not insignificant. The MMW 04 features some of Nike's newest technology paired with the drippy techlord sensibilities Williams is known for.

For now, the release has only been confirmed for European retailers including Luisviaroma, BSTN, and Foot District, where it'll release December 21. Nike has banned shops in Europe from shipping its high-profile releases back stateside, so Americans will just have to wait even longer to see when the MMW 04 drops here.

We've already waited all year for this shoe, so what's a (likely) few more weeks?