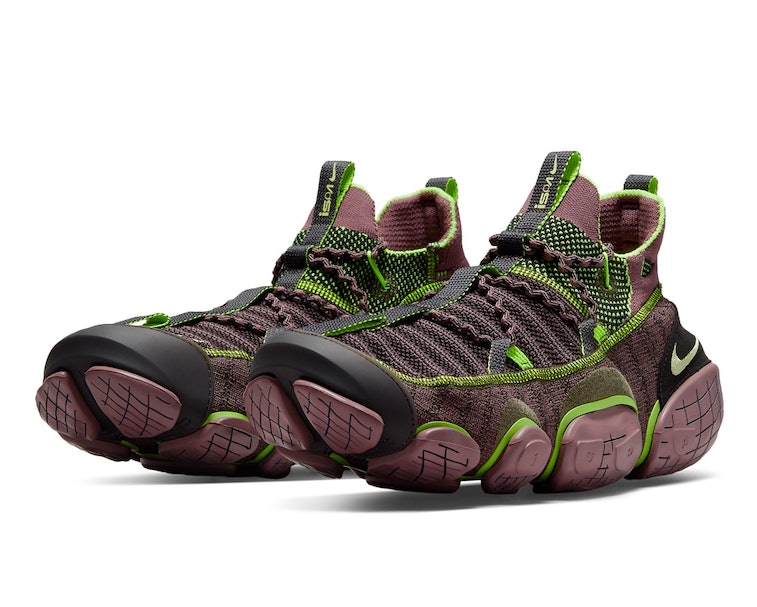 Following the successful launch of its glueless ISPA Link sneaker, Nike is keeping its momentum going. The modular sneaker, originally revealed in four color schemes and debuted in two, is now gearing up for drop number three.

As part of Nike’s ISPA initiative (which stands for improvise, scavenge, protect, and adapt), the shoe adapts to some of the unsustainable challenges of sneaker design. Instead of using glue that eventually wears down and threatens the lifespan of a sneaker, the ISPA Link is built by clicking together three major components: a knit upper, tooling, and a cage sole.

Bold innovation — Where brands sometimes equate sustainability with minimalism, Nike does the opposite here. The shoe is anything but subtle, instead opting for an avant-garde vibe with exaggerated soles and plenty of texture on the upper. Color neutrality isn’t a factor here either, given the bold contrasting seen on each pair.

The third chapter will join the “Black” and “Barley” color schemes with a burgundy and lime green palette. Most of the knit upper and outsole are done in the wine red, while the neon green contrasts throughout. Black covers the toe and upwards from the tongue to the tabs on the collar and heel. The grid pattern is still present on the outsole, and the ISPA branding appears on the main tab.

The Earth loves it too — Eventually, as more color schemes are released and the sneaker becomes more accessible, wearers can make their own combinations of the ISPA Link to become what Nike VP Darryl Matthews calls “co-creators.” At the end of its life cycle, the sneaker may then be turned into Nike Grind, the brand’s recycled scrap material, and repurposed into another product.

Prioritizing sustainability isn’t new for a brand that already has plenty of eco-friendly initiatives in motion, but doing so while maintaining performance was the real obstacle. According to Matthews, “It was a giant puzzle trying to figure out how to get [the shoes] to withstand the human body.” The kicks’ carbon footprint is also greatly reduced because, without the glue, no tunnels, heating, or cooling rooms are needed.

If Nike really has perfected the ISPA Link’s DNA, the latest version should be ready to go in the next few weeks (with the fourth and final following closely behind) via Nike and select stockists. It sits at $225, a fair price for a funky sneaker that can be taken apart and reassembled in eight minutes.