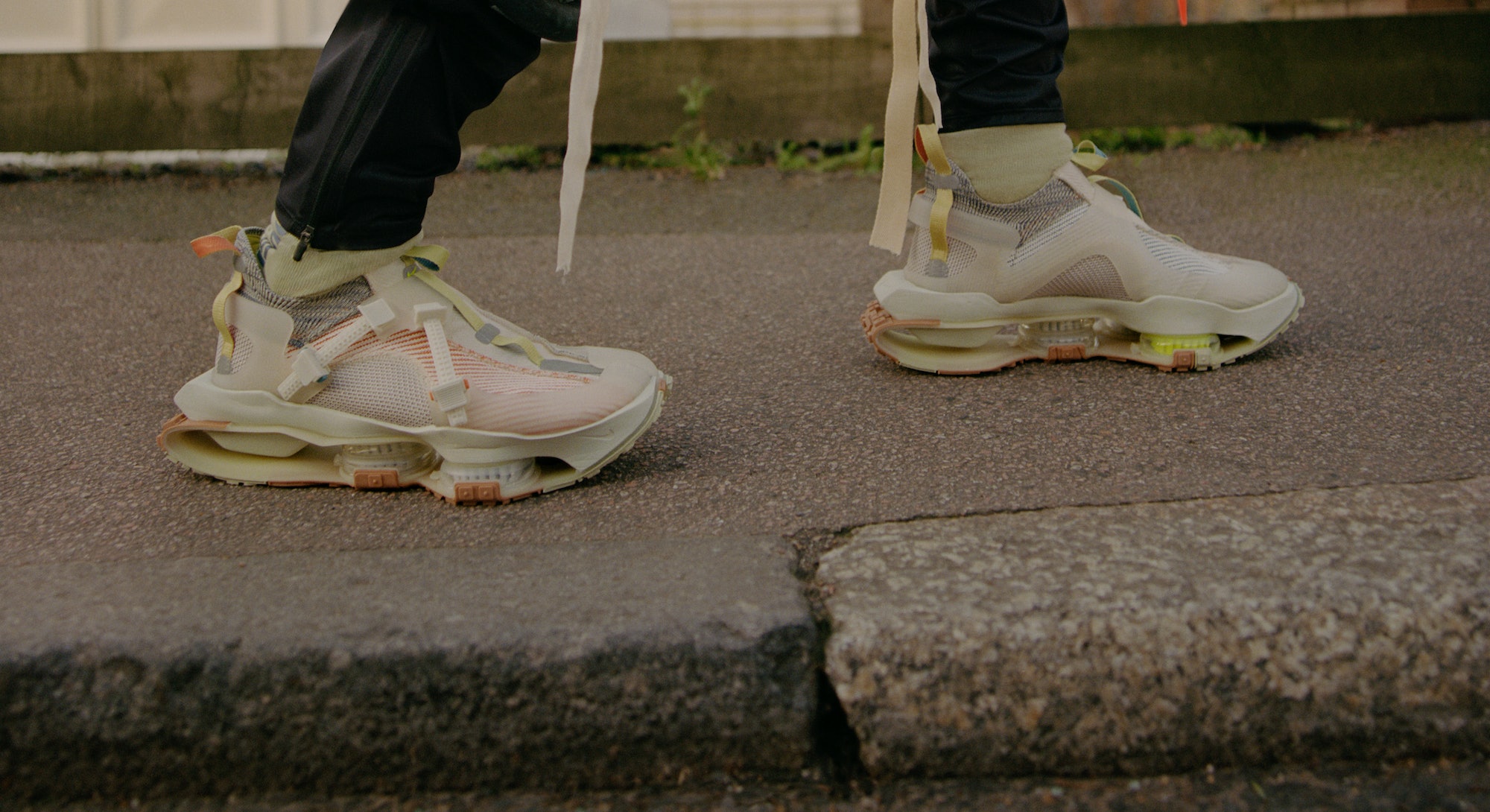 It seems as if Nike's goal for this year is to come out with the most insane-looking sneakers. First, it was the futuristic, trash-filled Space Hippies, then the chunky Double Zoom Stacked, and now it's following those up with its ISPA 2020 collection.

That includes the Road Warrior, which looks like it belongs in an alternate universe from Mad Max or Terminator, thanks to its laceless tying mechanism, lightweight knit patch upper with a split toe, an open-floating heel that will surely turn some necks, and pancake-style Air Zoom units which mirror those on the Double Zoom Stacked mentioned earlier. Nike says the Road Warrior is a reference to early Shox prototypes, its Alphafly NEXT% record-breaking marathon shoe, and the upcoming Air Zoom BB NXT basketball pair.

The Road Warrior may be the highlight of the bunch, but the new ISPA capsule also features other forward-thinking sneakers: the Overreact FK, Overreact FK Sandal, Flow 2020, and Drifter, each with a functional design that Nike hopes people won't put a limit on. Essentially, the brand doesn't want you to look at these as comfort, lifestyle, or performance shoes exclusively, but rather a mix of all those genres put into five different silhouettes.

With the Overreact FK, for instance, Nike took its React soft cushioning technology and created a beautiful mess that wraps an enlarged version of the midsole around the entire shoe. That thick and extreme React misdsole, which Nike says helps "make sense of where cushioning is most and least needed," is complemented by a Flyknit upper that promises to make the Overreact super comfortable. Interestingly enough, as with its Space Hippie collection, Nike used a mix of excess yarns on the Overreact FK.

As for the Flow 2020 and Drifter, they're more about being lightweight, breathable. Nike describes the Flow's perforated outsole as"walking on a subtle breeze," while the Drifter is a high-top rugged boot with a Tabi split-toe design inspired by Japanese culture — just like the Road Warrior.

The ISPA capsule was first introduced in 2018, as Nike out set out to accomplish a design philosophy with four key elements: "Improvise. Scavenge. Protect. Adapt." The goal with ISPA, according to Nike, is to combine athlete data, excess materials, traditional crafts, and its know-how of integral pieces of the design process to create a fresh wave of experimental sneakers and apparel. "The actions form a set of design principles manifested as a pinnacle experimental expression of Nike design across all categories, including the latest innovations and established creations," Nike says about the idea behind ISPA.

Aside from the sneakers, Nike's ISPA 2020 collection includes clothes too, such as the Inflate Jacket that was introduced in March for $450. This wild garment, which pays homage to the Nike Airvantage from 2006, is an inflatable jacket with air bubbles that you can manually adjust using an "internal blue bladder." But why would you need that? Well, Nike says the problem the Inflate Jacket solves is keeping you warmer as temperatures shift, and pumping that air on your jacket can help you do exactly that.

There are obvious similarities between what Nike is trying to do with ISPA and Space Hippie – namely the sustainability aspect – but the company says that there are various principles in each project that makes them different. "At Nike, we view design as an inherently optimistic practice. ISPA and Space Hippie both reflect that sentiment in ways both overt and subtle," Nike told Input. "Nike has made a commitment to being more sustainable across the company. It is part of Nike’s broader Move to Zero commitment, a journey towards zero carbon and waste to help protect the future of sport."

The brand added that these beliefs present themselves in a number of ways across its products, from the design to the manufacturing process. "In design, it provides an opportunity to be more thoughtful with the materials at hand and invites us to think about what types of materials or processes or methods of make we might decide to use on any given project," a spokesperson said. "It also asks us to think about the excess materials we already have at hand and how they might be repurposed for future use. We express that study overtly in Space Hippie. And it is also true for ISPA, particularly when we think of how the 'I' and the 'S' in ISPA ask us to 'Improvise' and 'Scavenge' in our approach to design."

Still, there's a difference between this approach in ISPA and Space Hippie, Nike says. "Space Hippie explicitly invites our designers to think first about new sustainable methods of make — with an emphasis on employing pre and post-consumer waste. ISPA on the other hand is principally about solving problems for everyday athletes first, and then using new sustainable methods of make (like Nike Flyknit or scrap ZoomX foam) within that initial scope of solution-oriented design."

Ultimately, the choice between Space Hippie and ISPA comes down to preference and what you want to wear on your body. If you're into any of the ISPA 2020 footwear, let me first tell you that the Road Warriors are a cool $500 – aka you're going to have to break the bank if you want a pair when they drop on July 10. As for the rest of them, along with the Inflate Jacket, check out the list (and pictures) below: