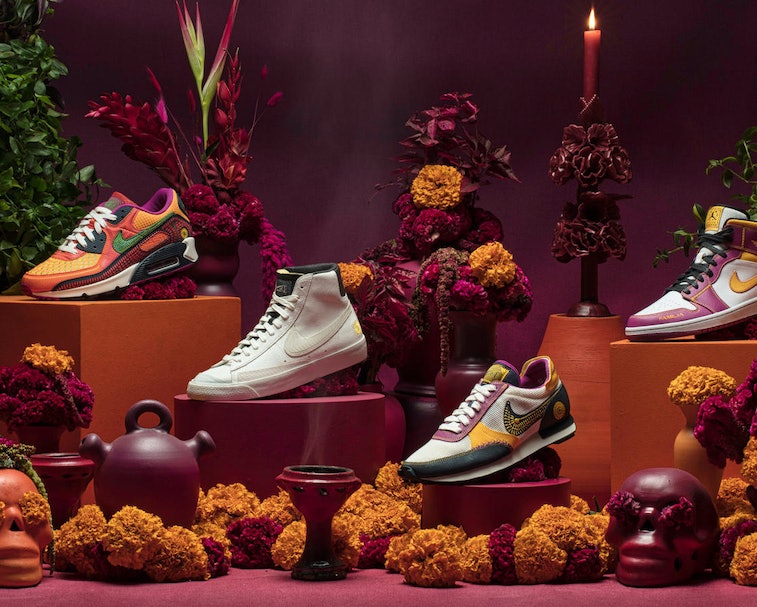 Nike has made an annual tradition out of celebrating Día de Muertos via an exuberant pack of sneakers. This year's collection puts an emphasis on family while also embracing a purple-and-gold color scheme that'll draw attention from Los Angeles Lakers fans.

These sneakers are vivid — As a nod to the ofrendas (ritual offerings) put together for Día de Muertos, each of the sneakers features intricate and colorful details. The Air Jordan 1 — which will be the highlight of any collection — gets contrast stitching and a special Jumpman tag on the tongue. Inside, a traditional marigold appears on the insole — a throughline throughout the sneakers.

The same flower is embroidered onto the three other sneakers, including a Blazer Mid that isn't nearly as plain as it first looks. Its Swoosh bares a rich raised texture, while the leather that makes up the upper has a cracked effect. On the DBreak Type, the Swoosh's texture is more conspicuous to go along with its more colorful scheme.

Liveliest of all is the Air Max 90, which comes absolutely loaded with colors and patterns. All the raised patterns are just begging to be touched, surely providing a satisfyingly tactile experience.

Coming well ahead of the holiday — Día de Muertos begins the weekend of October 31, but Nike is getting a leg up on the celebration by releasing these sneakers on October 15. Mexico will get the sneakers a week early on October 8 through the SNKRS app, with the global release to follow on both the app and Nike's website.

Should you pick up a pair, you can justify the purchase by telling your family it was for them.