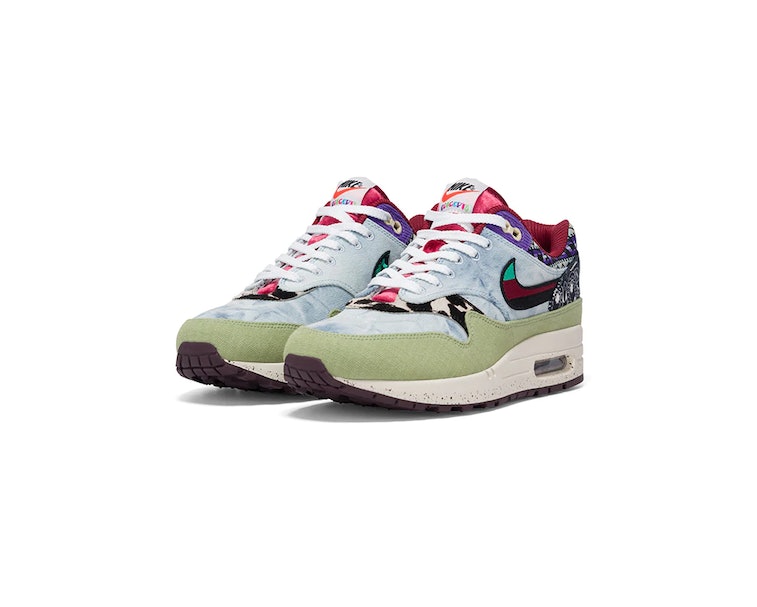 Nike’s Air Max 1 sneaker rings in its 35th anniversary this year and has subsequently partnered with a few friends to celebrate. Streetwear boutique Concepts plans to pay tribute to the classic silhouette with a makeover that’s anything but, covering three versions of the sneaker in denim, embroidery, camouflage, floral, and bandana prints. Each is inspired by late ‘60s and early ‘70s culture, mimicking styles worn at festivals and protests of that era.

The trio of designs was teased last month, with Concepts creatives Deon Point and Annie Morgan sharing photos of the Air Max 1 sneakers on Instagram. Still, official Nike imagery and a release date has only been released for one of the pathwork shoes, meaning each could roll out separately. All pairs are expected to come with a special-edition box covered in funky floral font.

Wild style — Dubbed the Concepts x Nike Air Max SP “Mellow,” the first sneaker of the bunch features a vintage-inspired paisley bandana print at its heel, with tiny Swooshes worked into the pattern to rep Nike. Acid-wash denim covers the upper half of the sneaker, accented by cow-print hair, while red velvet dresses the tongue and a pair of extra laces. The bottom half of the shoe sports an olive military-like material accented by a single star at the toe.

Although the bevel of details seems overwhelming, each has its own meaning: A white Concepts-branded guitar pick hangtag nods to the shoe’s festival theme, while floral Swooshes add to the bohemian feel. Spots on the cream midsole are inspired by concerts in parks, mimicking the look of mud without actually sacrificing the sneakers.

But wait, there’s more — The remaining two Air Maxes boast similar features albeit in different colors and textures. Continuing the patchwork theme, the second sneaker highlights its denim upper with similar Swooshes and cow-print details. Multiple Swoosh-detailed bandana prints cover the shoe, making it the most colorful of the trio with a purple pattern dressing the lower half of the shoe and a green version covering the heel. An additional overlay at the heel — reminiscent of woven bracelets — boasts Concepts branding.

Last but not least, the third Air Max 1 sports a denim upper accented by camo print, orange bandana print heels, and cow-spotted fur. Both striped and floral Swooshes decorate the sides of the sneaker as a light brown velvet dresses the tongue.

Dropping this week — Concept’s “Mellow” Nike Air Max SP sneaker will release exclusively through the boutique’s website on March 5 at 11 a.m. ET, with the rest of the patchwork sneakers expected soon after. A price has yet to be announced, but pairs will be flying fast regardless.