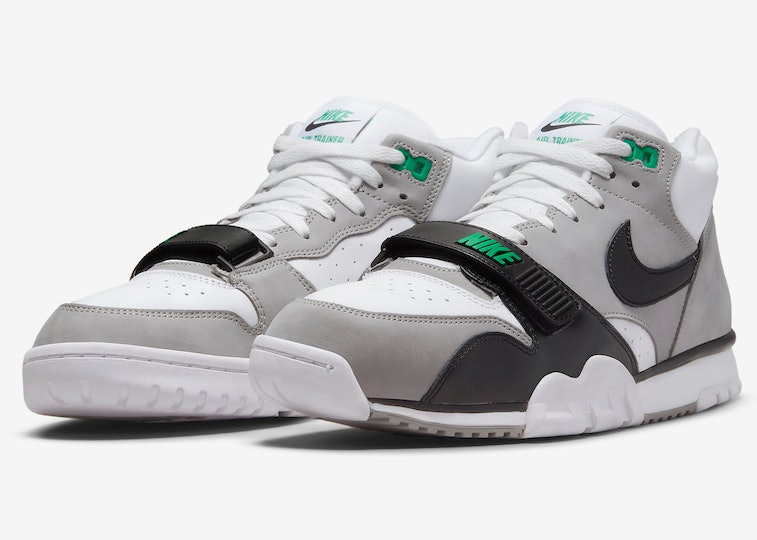 As vintage sneakers continue to have wide appeal, Nike is rolling out even more kicks from its voluminous archives. The next retro release expected from the brand is an Air Trainer 1 Mid made up in a gray, white, and teal “Chlorophyll” color scheme inspired by the Portland YMCA’s gym equipment.

The Air Trainer 1 was last reissued in 2020 under the Nike SB banner, making the model relatively rare amongst the Swoosh’s reissued sneakers. Known as the “Swiss Army Knife of performance shoes,” the silhouette was designed by Tinker Hatfield and debuted in 1987, making this year the model’s 35th anniversary. Since its release, the sneaker has enjoyed reigns in the ‘90s for cross-training and in the ‘00s as part of Nike’s Rebirth series.

Get ‘em before they’re hot — The Air Trainer was supposed to make a bigger comeback this year courtesy of multiple Travis Scott collaborations, but the postponed partnership pushed back hype for the sneaker. Still, on-foot photos of the rapper’s brown Air Trainer 1 Mid sneaker — originally slated for release at the end of 2021 — have already begun to up demand for the retro kicks.

Scott was one of the earliest (and most famous) endorsers of Nike’s Dunk sneaker in its current return to popularity. Although he first donned a pair in 2018, the subsequent hype that accompanied the model has made it near impossible to buy today. That said, you may want to pick up a pair of the Air Trainer 1 Mid while you can before clout-chasing consumers catch wind of the model.

Simple but enticing, the “Chlorophyll” iteration boasts smooth white leather panels beneath light gray suede overlays. The shoe’s mudguard piping, Swoosh, and signature velcro straps are done up in black to allow the Air Trainer’s namesake hue to shine. Bright teal highlights the eyelets as well as Nike branding on the forefoot strap, heel, and tongue. White midsoles and a gray outsole finish off the chunky sneaker.

Grab yours soon — Nike has confirmed its “Chlorophyll” Air Trainer 1 Mid will arrive at 10 a.m. ET May 20 through its SNKRS app. Pairs are set to retail for $120, making the retro release as digestible as other Nike drops (although arguably even more worthwhile). Make sure to pick up a pair before doing so becomes impossible.