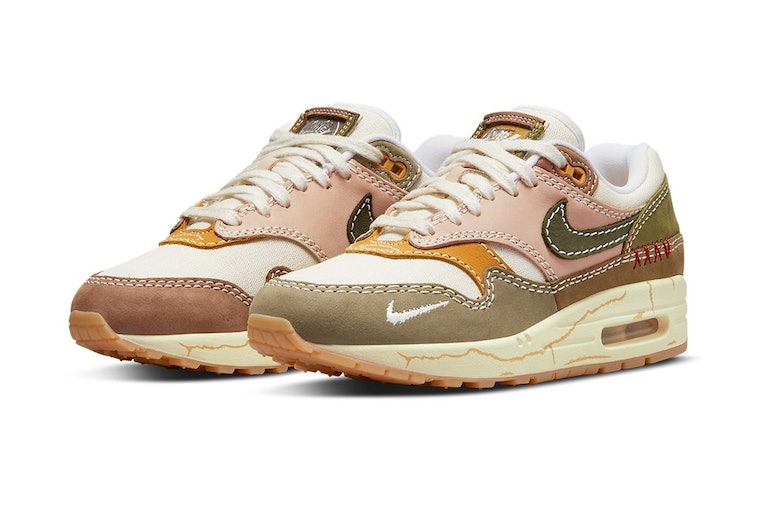 Nike is gearing up for its annual Air Max Day celebrations with a slew of collaborations and limited-edition sneakers. Ahead of the March 26 holiday, the brand has teased an Air Max NFT designed by none other than Tinker Hatfield, as well as a trio of patchwork Air Max 1 shoes made in partnership with Concepts. Up next, Nike has unveiled a “Wabi-Sabi” Air Max 1 sneaker featuring distressed details and contrast stitching.

While Air Max Day celebrates the entire Air Max line, this year’s celebrations coincide with the 35th anniversary of the Air Max 1, meaning the model will have more of a spotlight than usual. Nike has created three versions of the sneaker — one exclusive to North America, one exclusive to Europe, and one exclusive to Latin America and Asia-Pacific — with each taking on a theme central to its release region. “Wabi-Sabi” is the latter of the three offerings, referencing the Japanese concept of appreciating imperfections.

Distressed details — In the spirit of embracing faults, the Air Max 1 comes covered in unfinished details. Exposed white stitching pieces together multicolored leather panels, each of which takes on an earth tone like olive, tan, muted orange, or pastel pink. Various shades of brown break up the suede mudguards, while underneath, cream midsoles sport crack-like patterns for an aged look.

At the heel, the sneaker’s traditional Nike Air branding has been replaced with suede Nike smiley face panels, with each taking on an olive or brown color to contrast the underlying mudguard. An embroidered “XXXV” motif, found in red on the lateral side, subtly nods to the 35th anniversary of the Air Max 1.

More obviously, clear tongue windows showcase the date “3/26,” otherwise known as Air Max Day. The graphic is interchangeable with other patches, two of which bear a Nike Swoosh smiley face and another which allows the wearer to label their sneakers with their name and social media handle.

Is it worth it? — A limited-edition striped box, commemorating both Air Max Day and the Air Max 1’s 35th anniversary, houses the “Wabi-Sabi” sneakers. While pairs are only expected to release in the Asia-Pacific and Latin America regions on March 26, sneakerheads outside of those areas can find the shoes on the resale market, provided they’re willing to pay an up-charge. Maybe the extra cost is part of embracing the sneaker’s imperfections.