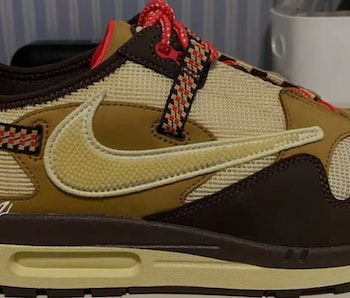 After we got an official preview for Travis Scott’s Air Max 1, we’re finally getting a closer look at the upcoming shoe. Sneaker insider @zsneakerheadz released detailed photos of the workwear-inspired design, showing off Scott’s signature backward Swoosh — while also claiming that not one, but five Air Max 1s are expected from La Flame come this holiday season.

First teased on SNKRS in March — otherwise known as Air Max Month — we know the rapper’s newest collaborative sneaker is inspired by the desert and trending workwear designs, taking on a boot-like look reminiscent of Nike’s own utilitarian ACG line. A clip of Scott wearing the model while working out on an exercise bike only furthers the idea that these shoes aren’t meant for a hypebeast’s shelf — instead, they’re built for performance.

Scott straight-up revamped the AM1 — New imagery from @zsneakerheadz shows off more of the footwear’s rugged design, which boasts his signature enlarged Swoosh backward on the midfoot done up in a tan snakeskin material. Dark and light brown suede overlays elevate the shoe’s tan mesh base, while hits of red add contrast to the shoelaces and pennant-style Cactus Jack heel branding. Underfoot, the tan and brown shades remain, making way for an opaque Air Max unit.

With added tri-colored nylon straps by the midfoot and heel, the sneaker takes on a more utilitarian look — though the unexpected elegance of the design does make us hesitate to exercise or use the sneakers like Travis had in his preview. After all, we’re not millionaires (billionaires?) and we’ll be lucky to score any pair of the rapper’s Air Max 1s.

That said, this may be our favorite Scott collaboration yet — and given his numerous Nike partnerships, including a previous Air Max revamp, that’s saying a lot. But here, La Flame hasn’t just added a backward Swoosh and a cool design; he’s completely revamped the Air Max 1.

Travis’ holiday gift to sneakerheads — These newest photos are also pretty reputable, given we saw Scott himself donning the brown sneaker last month. With a holiday release expected, we’re only waiting for the rapper to give us more glimpses at the other four iterations, which sneaker insider @py_rates claims will arrive in black, lavender, light gray, and yellow.

Pairs are predicted to retail at $160, though resale for the shoe will likely spike up to $1,000. Getting a pair will be a feat as consumers have to battle resellers and fans alike — not to mention that Nike might limit the designs to a lottery-based draw on SNKRS. But if you miss out on Scott’s newest collaboration, we wouldn’t stress: The rapper definitely has another in the works already.