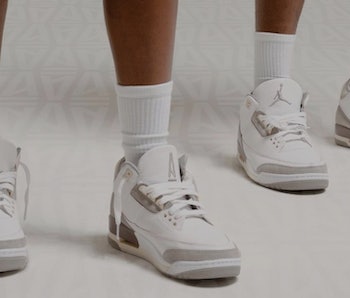 After a slight stumble, A Ma Maniére’s highly anticipated Air Jordan 3 is back — and releasing this month. Originally slated to drop March 30, the boutique disclosed a few weeks ago that its sneaker would arrive later than scheduled, citing “unexpected delays” for the sneaker’s postponement. The news disappointed many and strayed from A Ma Maniére’s otherwise smooth release track record, but now, the label has kept its promise that the sneakers would arrive at a “new upcoming date,” perhaps sooner than we thought.

Both Jordan Brand and A Ma Maniére have kept quiet about their Air Jordan 3, with updates only coming from the latter’s Instagram account. Despite the approaching drop date, consumers still don’t know where the sneaker will eventually be sold, though many are asking for the coveted release to be protected from bots. A launch on SNKRS might subject sneakerheads to a lottery-based draw, though, meaning a pair isn’t guaranteed. The sneaker game is becoming increasingly fickle.

Highly coveted kicks — A Ma Maniére has carefully curated hype around its Air Jordan 3, and now with delays, even more sneakerheads will be waiting to jump on the silhouette. Plenty are looking forward to the upcoming release as the collaborative sneaker is set to arrive in full family sizing — not just women’s, as previously rumored — with adult pairs priced at $200 and preschool pairs at $90. Even the smallest shoes will go fast, though, and those who want to cop need to plan accordingly.

The luxurious sneaker boasts an elegant tumbled white leather upper, a raw leather trim, and gray suede overlays. The Air Jordan 3’s usual elephant print has been toned down, while bone-colored accents on the bottom half of the midsole and eyestays add aged detailing.

High-end details have also been added, with a silver Jumpman logo embroidered on the right shoe’s tongue, and the left shoe swapping out Michael Jordan’s signature mark for A Ma Maniére’s “A” logo. Sporting a classy and vintage look, the sneaker is extremely versatile — perhaps why it’s desired by so many.

Start the countdown (for real this time) — A Ma Maniére shared in an Instagram post that its Air Jordan 3 would drop on April 21, not sharing any further information. With the date approaching, though, we suggest seeking out raffles and saving up for the sneakers — especially if you’re willing to buy them resale. With all news on the Air Jordan 3 coming from A Ma Maniére’s Instagram account, it’s best to follow for future updates on the shoes. You don’t want to miss out on some of this year’s cleanest kicks.