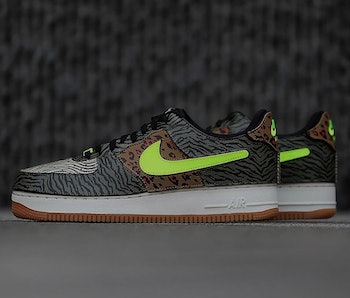 Nike has experimented with its classic Air Force 1 for years, but now the brand is letting consumers play around with the silhouette themselves. A new style, dubbed the “Air Force 1/1,” allows wearers to remove and replace the sneaker’s exterior panels using Velcro attachments. And following a rather simple, all-white debut, the model is now available in multiple animal prints, embracing the “Animal Instinct” it’s named after.

Sneaker customizers have made entire businesses out of Nike’s AF1, buying pairs and reworking them for consumers. Nike’s new Air Force 1/1, though, might direct some of these shoppers directly to the brand, offering lower prices and guaranteed satisfaction. Already, Nike quietly sold out of Air Force 1/1 pairs once the silhouette was put on the brand’s Nike By You customization program. We’ll have to wait and see if demand is as great for Nike’s pre-designed pairs.

Walk on the wild side — Blending a trio of animal print graphics with neon accents, the Animal Instinct sneaker is sure to appease any bold print lovers. And as the upper boasts a full velcro base, each piece from the toe box to the heel can be fully customized.

Wearers of the AF1/1 can choose between three animal print options. The most neutral option may be a gray and black tiger print that slightly resembles camouflage, while the second print, a standard white and black zebra pattern, adds more of a pop to the sneaker. A third print, perhaps the loudest of them all, sports olive and black cheetah spots accented with hits of bright red.

Vivid shades make the shoe even more striking. A neon yellow dresses the Swoosh, while also hitting the lace dubrae and tongue and heel branding. Of course, if you own other AF1/1 pairs (or are pretty crafty with Velcro), you could switch out the bright hue for a more toned-down look. Keeping true to the classic AF1, the only non-customizable parts of this sneaker are its white midsole and gum outsole.

Let the cat (print) out of the bag — It seems the busy design featured the only details about the shoe Nike was willing to release. As of now, the brand has yet to announce a drop date or expected price point for the Animal Instinct Air Force 1/1. Given reputable pictures have arrived, though, we’re anticipating an official announcement soon. Maybe the sneaker’s wild energy will translate into this summer’s festivities.