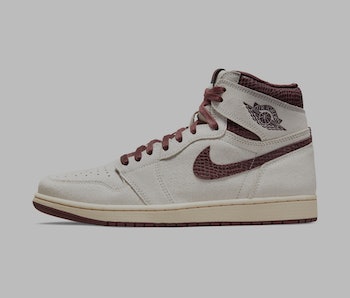 Atlanta boutique A Ma Maniére only released its first Air Jordan collaboration early this year, but it’s already beginning to cement itself as one of the brand’s most laudable partners. Its neutral tone Air Jordan 3 endures as one of the best Js released this year, and official images have revealed an Air Jordan 1 equally worthy of your attention.

For its second collaboration with the Jumpman, A Ma Maniére has crafted the Air Jordan 1 out of an alluring combination of snakeskin and sudede. The boutique’s muted color palette continues with cream and burgundy making up the entirety of the sneaker, including a midsole that’ll handle wear better than white. Also making a return is the quilted lining from the Air Jordan 3, which must be a joy to have wrapped around your feet.

The burgundy snakeskin, almost certainly a synthetic, is used sparingly for the Air Jordan 1’s Swoosh and collar, with the rest of the upper coming in cream suede. Burgundy is also used for the laces, midsole, and branding — tying together one of the most tasteful Air Jordan 1s you’ll ever see.

Hang tight for release deets — We’re still in the early phases of leaks, with only images to show for A Ma Maniére’s follow-up to its hit Air Jordan 3. A release date has yet to officially hit the schedule, but we’re likely to see the Air Jordan 1 release sometime around the holidays as one of the most covetable drops in a season flush with kicks.

If you peel back the ankle flap on this limited-edition Air Jordan 1, you’ll find a quote from Michael Jordan. “You have to expect things of yourself before you can do them,” the raised text reads with Jordan’s signature printed underneath. It’s the kind of detail no one else will see — but these sort of hidden flourishes are the type that can take a collab to the next level.

Further building up the prestige is “Airness by A Ma Maniére for Air Jordan” printed on the sneaker’s insole, and we’re absolutely buying everything it’s selling.