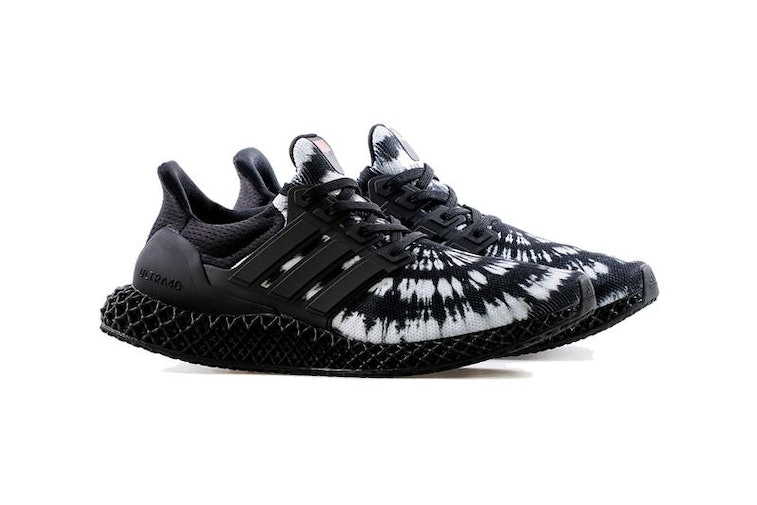 Nice Kicks and Adidas are continuing their longstanding partnership with the introduction of another collaborative release, which takes form in the Ultra4D silhouette. Dubbed the “Have a Nice Day” sneaker, the footwear sports a familiar tie-dye design — previously seen on Nice Kicks’ tie-dyed UltraBoosts and NMD R1s.

The two have collaborated on sneakers since 2015, starting with Adidas’ NMD R1 silhouette. While past designs boast bright red and rainbow hues, their latest release caters towards minimalists, opting for a black and white tie-dye print. It also features an upgrade from Adidas’ UltraBoost sneaker — the last collaboration between the brand and Nice Kicks — to the Ultra4D model, which combines the UltraBoost’s upper with a cushy 4D midsole.

To tie-dye for — First debuted by footwear designer Frank Cooke and Nice Kicks head Matt Halfhill, the Have a Nice Day Ultra4D features a black and white spiral tie-dye print throughout its knit upper. The sneaker’s heels and Three Stripe branding have been left a monochromatic black, allowing a small red Nice Kicks logo to stand out on the tongue. Staying true to the silhouette’s design, latticed 4D midsoles give the shoe an appealing texture, while also dressed in black.

Cooke confirmed the name of the sneaker in an Instagram post, while also revealing the theme of the collaboration. According to his post, the design nods to “enjoying the elements during these confining times.” This messaging seems to be lost on the shoe, considering previous collaborations were more colorful and detailed. Yes, tie-dye has a summery, outdoor feel to it, but how else is the sneaker’s design capturing this feeling?

Apparently, through its packaging. In the Have a Nice Day Ultra4D’s friends and family seeding kits — seen on Cooke’s Instagram — the sneaker comes with a picnic basket complete with a matching tie-dye blanket, plates, silverware, a graphic mug, salt and pepper shakers, and even a wine key. So, while the shoe itself might not express an escapist feeling, it can be worn while “enjoying the elements.”

Escapism is expensive — That is, if you’re willing to pay the price. Nice Kicks and Adidas’ collaborative sneaker is set to retail at $250, making it a more pricey collaboration than usual — especially considering buyers won’t receive an extensive picnic set. Instead, consumers are paying for the shoe’s exclusivity and hype: Resale prices of the duo’s previous sneakers are well above the retail price for this new drop.

Slated to drop March 5 on the Nice Kicks webstore, the Have a Nice Day Ultra4D is sure to go quickly, whether people are copping to resell or wear. The Nice Kicks site, however, has conveniently left a countdown to when the shoes drop so you can keep an eye out for their release. Well, you and about a thousand other sneakerheads.