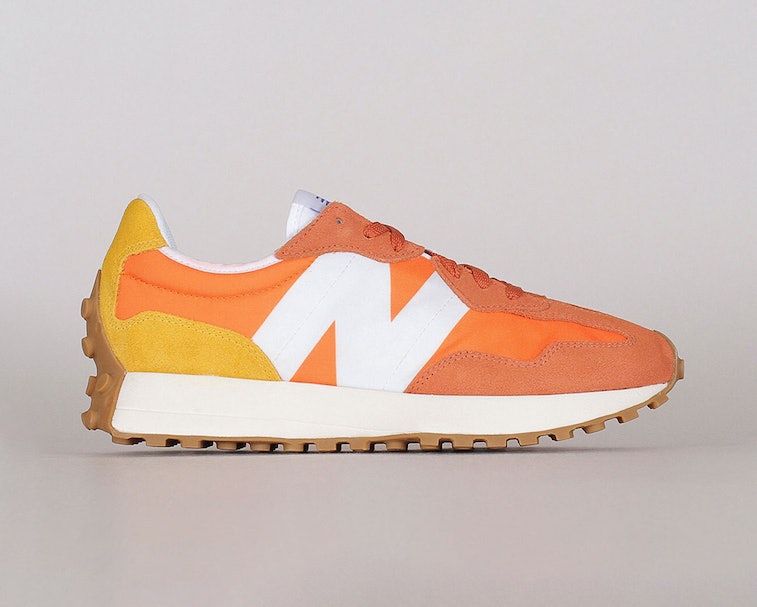 While New Balance's resurgence this year has been in large part down to it putting its old models in the hands of new and exciting brands, it's also produced a brand new silhouette unlike anything we've seen.

The 327, which initially launched in a heralded collaboration with Casablanca, looks like it came from the '70s but is actually an entirely fresh creation. The massive "N" is probably the first thing to catch your eye, but the coolest detail is the studded outsole that extends all the way up the heel for an effect reminiscent of octopus suckers. It's super weird, but delightfully so. Like many great designs, the whole package feels so familiar that it's hard to believe it didn't already exist.

So you didn't get the Casablancas — Chances are you weren't able to fetch the first Casablanca 327s, which were highly anticipated, sold out immediately, and have been pumped back into the resale market for more than twice the starting price. It's a sad, familiar story — but the good news is that another 327 is on the way that's quite similar.

A new orange-and-yellow variant is slated for release as part of New Balance's wider push for the 327. While the materials aren't quite as nice and there's no green to be seen, the sneaker maintains the same pop of orange to create a real head-turner. Still, suede and nylon are nothing to scoff at, even if they aren't as plush as Casablanca's leather. Anytime you're looking for a substitute for the hyped pair you really wanted, some sacrifices are necessary. These sneakers come damn close with the benefit of being more attainable.

Also: these have gum soles. And gum soles always rock.

You can attain them next month — The latest 327 is pegged for a June 6 release at HBX, and you can expect other retailers to stock it. It should also come in at a palatable $110, the same as New Balances's other non-collaborative pairs.