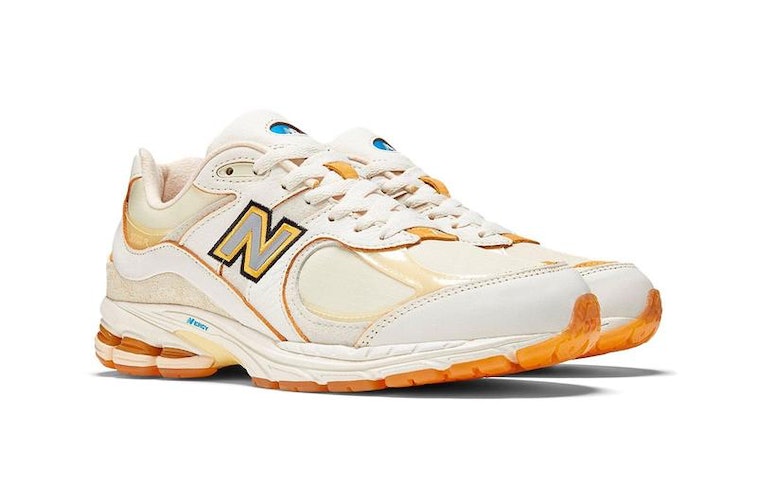 Joe Freshgoods is living up to his name with a fresh take on New Balance’s 2002R sneaker. The upcoming pair comes summer-ready with hints of orange, suede, and glossy overlays — arriving as part of a larger “Conversations Among Us” pack teased in March. The project includes the 2002R, as well as a revamped 550 model, each of which is expected to arrive in the coming months.

Previous Freshgoods x New Balance collaborations celebrated family and community, a theme continued by the “Conversations Among Us” pack. As creative director of the project, Joe sought to highlight Black voices and wrote on Instagram that he “wanted to tell a story of the Black experience, emphasizing crucial dialogues that connect the community while inspiring the next generation of Black creatives.” The designer also teased a photo of the 2002R’s shoebox that reads, “Designed and curated by Joseph Robinson and a team of Black associates at New Balance.”

A sunny sneaker — A cream shade covers the base of the sneaker, which mixes white mesh with leather, suede, and glossy overlays. Hints of orange suede peek out from underneath the overlying panels and appear more noticeably at the toe, tongue, and heel. New Balance’s logo comes debossed at the heel alongside mismatched “Conversations” and “Among Us” lettering. Fitting in with the theme, the text can only be read in full when the two shoes come together as one.

Made for (and by) Black voices — The campaign for the 2002R sneaker and its 550 counterpart dives deeper into the inspiration behind the “Conversations Among Us” pack. A video starring Kawhi Leonard represents a “visual representation of an idea I had,” Joe wrote on Instagram, adding that the clip emphasizes the “dynamic of Black men, nonverbal communication, and the nonchalant head-nod.”

A release of the “Conversations Among Us” pack has yet to be announced, although official imagery and campaign videos indicate a drop should happen soon. The campaign is set to launch in April, with both the 2002R and 550 expected at New Balance’s website. Make sure to keep an eye on Freshgood’s Instagram for further updates.