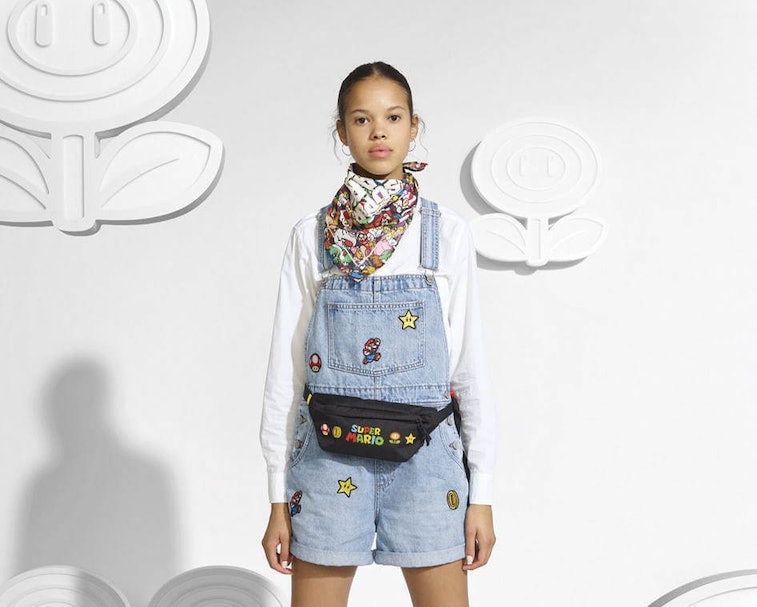 Levi’s teased a mysterious collaboration with Nintendo’s Super Mario last week. Fashion Press got a first look at several pieces in the upcoming line, including what we now know are extreme closeups of Mario-themed overalls. On Tuesday, taking advantage of the March 10 (Mar10) date, Levi’s confirmed the future existence of the overalls with a couple of additional pictures. The clothing collection is expected to launch, rather suspiciously, on April 1, but it has a seal of approval from the President of Nintendo of America:

What to expect — The available photos for the line, based on today’s post and Fashion Press’s gallery, indicate a comprehensive clothing collection. The collective photoshoot images indicate the line will come in men’s, women’s, and youth sizes. Based on yen prices, the line will follow typical Levi’s pricing with the overalls costing about $150 USD.

Fairly minimalist graphic tees and sweatshirts can be paired with similarly adorned Levi’s jeans and shorts. At least two denim jackets will be available with light to moderate Mario branding. If you like your clothes much louder, a character-dense pattern is used for pants, shorts, a jacket, hoodie, and fanny pack. Other than the packs, baseball caps, a bandana, and a couple of totes appear to be the only accessories at this time.

It’s all about collabs — As Gamespot pointed out, Levi’s already created collections with Star Wars and Disney, so it’s no stranger to working with beloved characters. Back in 2016, Nintendo’s former president acknowledged that lifestyle branding was a more popular discovery vehicle for the company’s games. Nintendo seems to be leaning into this as a strategy; the Levi’s line coincides with a recently announced Lego partnership.