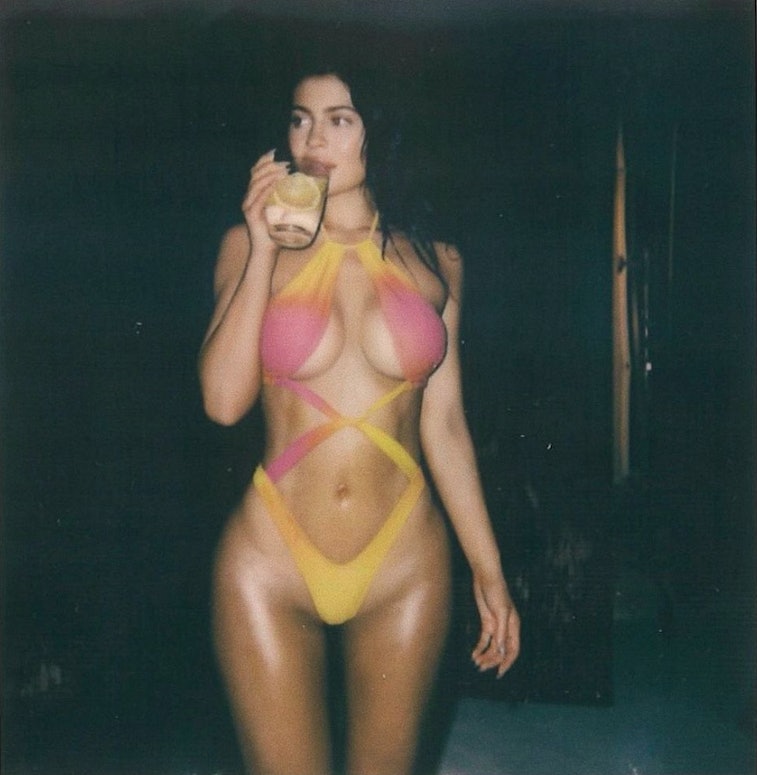 Kylie Jenner is expanding her empire — not just with her newly-announced pregnancy, but with the arrival of Kylie Swim. Announced last month, the new brand will release seven styles of swimwear in its first launch, including smaller sizes for the Stormi in your life.

Since Jenner initially teased Kylie Swim on Instagram, she’s shown off a few pieces in a series of Polaroid pictures and videos. Models, counting Jenner herself, can be seen donning pink, yellow, and orange bathing suits in one-piece and bikini styles.

What’s available — The brand revealed its first collection is led by its Caicos swimsuit, a halterneck bikini-esque suit tied together by crossing straps at the midsection. Monokinis August and Kylie — modeled by none other than Jenner — follow suit, continuing the midsection cutout theme. Cut It Out, an asymmetrical design with one shoulder strap, will also be offered during the debut drop.

Bikini separates come in red and yellow options, while the rest of the collection is available in yellow, orange, and a sunset-like ombré design. To get the full look, matching sarongs have been stocked alongside the swim range. Miniature swimsuits for kids, including an asymmetrical bikini, a traditional bikini, and a one-piece, are also available.

In the swim of things — Kylie Swim adds to Jenner’s growing list of business ventures, all of which are named after her. The beauty mogul runs Kylie Cosmetics, Kylie Skin, and co-runs the fashion label Kendall + Kylie with her older sister Kendall Jenner.

Yet the Kardashian-Jenners are notorious for creating a market prior to creating their brands: Prior to founding Skims shapewear, Kim was famous for her curves; before conceiving lifestyle brand Poosh, Kourtney was known for her healthy habits; Kylie’s prominent pout made her Kylie Cosmetics lip kits sell out in seconds. So what background does Jenner have on swimwear?

As seen on Instagram, Kylie is constantly donning a bikini or one-piece by her pool or on one of her many vacations. And while Kylie Swim drops just at the end of summer, swimwear season has no end for people like Jenner, who live in sunny California or can afford to jet off to tropical weather whenever. She’s an expert on swimwear because she’s always in it.

Still, Jenner’s star status is enough to sell out her first Kylie Swim collection, which drops today, September 17 on the brand’s site. The swimsuits range from $85 to $40 for bikini separates, while sarongs and mini swimwear range from $45 to $60.