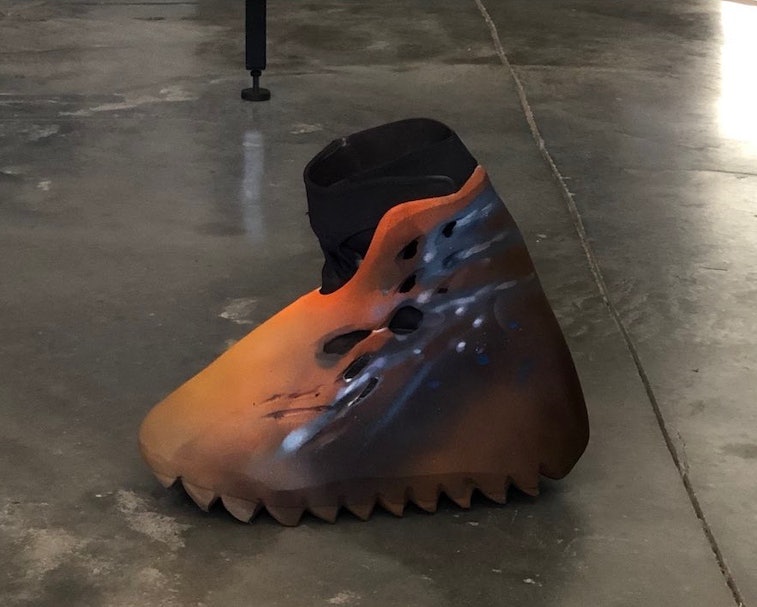 Kanye West isn't done teasing weird Yeezy designs that might be coming in the near future. After taking to Twitter to show off a sneaker collaboration with NBA player Derrick Rose, which feels like some sort of sea creature disguised as a clog, West has now revealed another Yeezy prototype — and this one may be even wilder than the YZY x D Rose. The unnamed silhouette has a similar shape as the Yeezy Quantum basketball shoes that dropped earlier this year, but it's taller, has more of a boot aesthetic, and features Mars-esque colors and a midsole that make it look like a rock with shark teeth... or like it belongs on Chewbacca's feet.

Yeezys for days — Over the past few days, Kanye has spent less time tweeting about making a presidential run and, instead, has been posting pictures random projects he's working on. And because this is Kanye, after all, that includes anything from underwater homers to new fonts and, of course, sneakers. Right now, it's unclear whether these "Chewbacca" Yeezys are done in partnership with Adidas, or they're being designed under the independent Yeezy brand.

Kanye does tend to wear many of his sneakers before they're actually announced, or post pictures of them on social media when he's not doing that. For the Yeezy x D Rose he teased this week, it was actually Rose's wife who flexed the bizarre all-white, ribbed clogs on her Instagram — even though the sneakers aren't her size, which make them look even more ridiculous than they already are.

Stay tuned — We'll likely learn more about these Yeezy moon (Mars?) boots, as well as other prototypes Kanye decides to show off, in the coming weeks or months. For now, let's hope the producer-turned-rapper-turned-designer-turned-politician continues to focus on his creative projects — which is arguably better than him tweeting about Donald Trump, or his fans learning that he's allegedly been secretly meeting with Jared Kushner to figure out dubious ways to take votes away from Joe Biden.

For those of you who are into these proto Yeezys but can't wait to get them, don't worry, Kanye has a myriad of other unique creations out in the world already, such as the Foam Runners and Slides. And, if all else fails, you always have the safe (and somewhat boring) option of Yeezys everyone and their mom loves, the overdone Adidas Yeezy 350 V2.