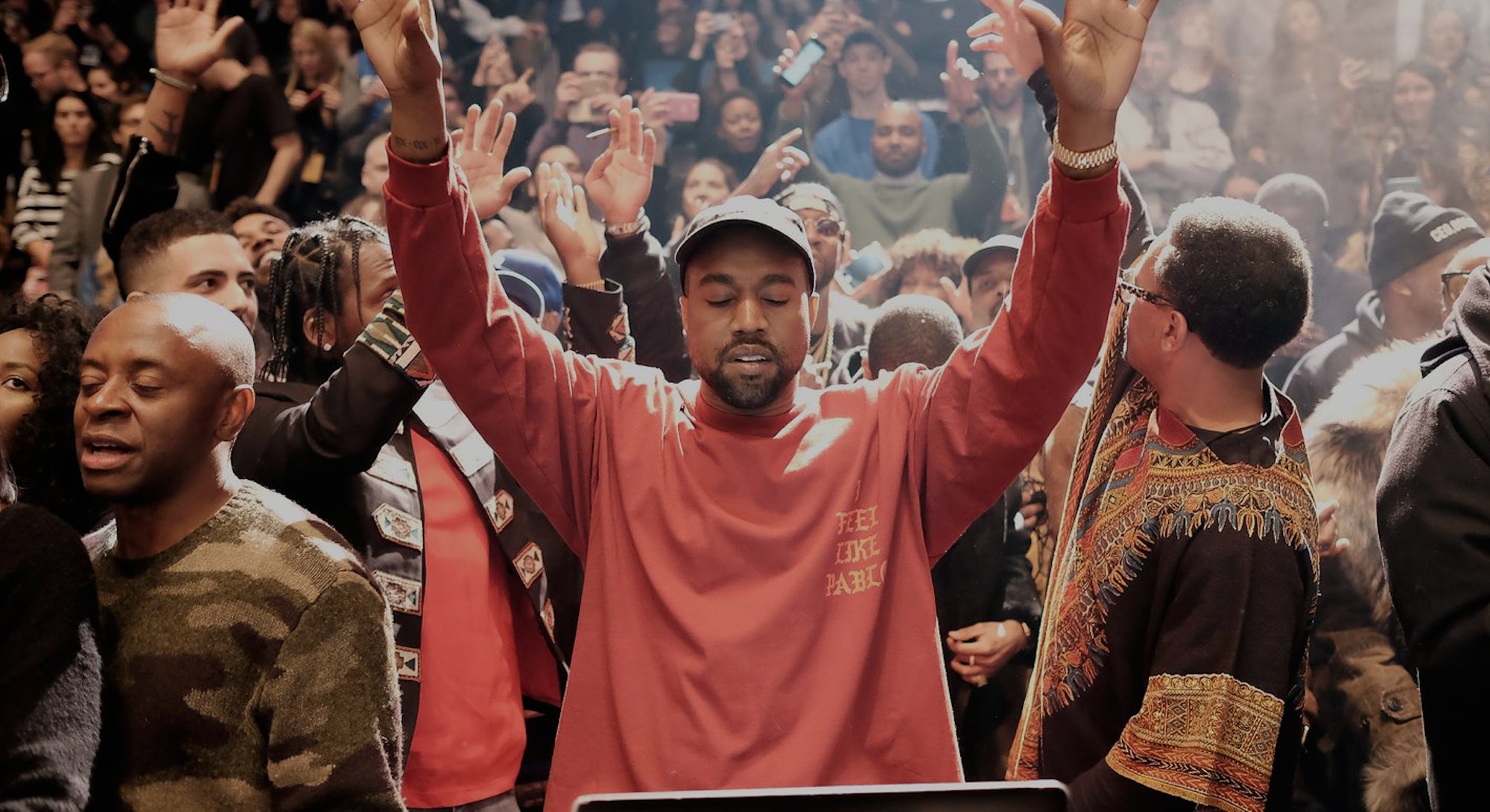 Where did you first see Kanye West’s “I Feel Like Pablo” T-shirt?

Was it on the artist himself, bouncing around Madison Square Garden at The Life of Pablo listening party in 2016? Was it in any of the global merch pop-up shops that followed? Was it one of its countless fast fashion knockoffs? For a full year of street style, it was nearly impossible to escape that gothic-printed Gildan T-shirt — yet it was only the beginning of Kanye West’s merchandise reign.

Over the course of his 17-year music career, Kanye West fundamentally shifted how people and the entire fashion industry would perceive music merch: he was the first to consciously turn concert T-shirts into viable streetwear grails. Concert merchandise used to be sold as a memento and nothing more — not something you’d style into an outfit, or buy with any intention to resell. To Kanye, making merch isn’t printing tour dates on a shirt and calling it a day — it’s crafting a wearable rest stop in his creative timeline.

Our current stop is in Donda: an unreleased album that’s already spawned the highest-grossing tour of all time, solely from a single night of merch sales.

The Donda listening session long sleeves, designed by Balenciaga’s Demna Gvasalia and priced at $100, clocked a whopping $7 million from the stadium merch booth alone. $7 million is also how much Kanye’s Yeezy GAP puffer, the inaugural item in a ten-year collaboration, hit in sales after he wore it on stage at his first Donda event. This album is updating the playbook Kanye wrote with 2013’s Yeezy, piggybacking his fashion endeavors with his musical milestones as the two become increasingly intertwined.

Kanye’s obsession with fashion was well-documented from the start of his career; his lyrics practically manifested a life within the industry’s upper echelon. Aside from dubbing himself the “Louis Vuitton Don” just seconds into his debut album College Dropout, he name-dropped more niche luxury figures throughout later verses. He boasts, “My chick in that new Phoebe Philo” in “Dark Fantasy,” and somehow rhymes “Balmain” and “Hedi Slimane” in the 2010 single “Looking for Trouble.” His lyrical infatuation with luxury fashion wasn’t common among fellow ’00s rappers, but it hinted at his genuine investment in the fashion world.

As his success climbed, Kanye opened many doors between streetwear and high fashion — not just for his projects, but for anyone he invested energy in. The most well-known being Virgil Abloh, who Kanye hired as his creative director 2007. The pair rushed fashion week together, interned at Fendi together, and brought albums like Watch the Throne to life; Kanye kept Virgil next to him on his climb through the fashion industry’s consciousness. Heron Preston, Fear of God’s Jerry Lorenzo, and Alyx’s Matthew Williams are just a few of the streetwear designers who scaled the industry through Kanye’s payroll.

Whether he’s liked by the public at any given moment or not, Kanye’s intuition of untapped coolness is inarguable, and it sends any medium he touches into a league of its own.

Through his 2013 album Yeezus, Kanye set himself apart from cookie-cutter merch. He created his tour line with graphic designer Wes Lang, who’s known for his recognizable work on Metallica merchandise. Under Metallica-esque “Yeezus” type, the tees featured skeletons wearing Native American headdresses or Grim Reaper robes. Several pieces depicted the Confederate Flag — Kanye’s attempt to subvert the racist tropes he tackled throughout Yeezus lyrics, but a huge aesthetic misstep regardless. Despite this controversy, the tour collection was so popular it spurred a more accessible line at Pacsun, where Kanye’s concert tees hung next to streetwear brands like Obey.

Two years later, Kanye’s Yeezy label launched and set the tone for his creative fingerprint moving forward. The clothing resembled dystopian loungewear, pushing the oversized silhouettes and neutral hues now synonymous with Kanye West. While rappers launching streetwear lines was nothing new (Tyler, the Creator’s Golf Wang, Drake’s OVO, and Pharrell’s Billionaire Boys Club were already on the market at this point), Yeezy was immediately and unquestionably positioned in the luxury echelon of fashion, as was the rapper-turned-designer himself. Kanye named Raf Simons, Helmut Lang, and Katharine Hamnett as his references — proving, beyond his lyrics, he carried the encyclopedic knowledge of a fully baked fashion designer.

Kanye’s entire trajectory changed with The Life of Pablo’s 2016 release, which combined a listening party and Yeezy Season 3 presentation at Madison Square Garden. Fans in attendance were the first to purchase “I Feel Like Pablo” T-shirts, which would go on to dominate an entire year of street style — an unprecedented feat for concert merch.

The graphic design was somewhat minimal compared to Yeezus: lyrics from “No More Parties in LA” and “Ultralight Beam” covered the backs of Gildan T-shirts or bomber jackets. Through this collection, a key theme of Kanye’s merch was born: the garments swapped explicit markers, like tour dates or even an album name, for lyrical snippets or aesthetic themes of the project. In doing so, Kanye’s merch tapped into the “if you know you know” mentality that practically defines streetwear, turning his garments into wearable FOMO that was objectively ambiguous but instantly recognizable to his fans.

Travis Scott would replicate this exact formula in 2019

The “I Feel Like Pablo” line is when Kanye’s merch tipped, from better-than-average memorabilia into a full-blown streetwear operation. After the release, Kanye opened surprise merch pop-ups in 21 cities around the world. Every store attracted lines so long they needed a ticket system; meanwhile, street style within the lines themselves was good enough to garner media coverage. Never before had an album release spurred a micro-retail empire, rivaling the fashion chops and cultural clout of a Supreme drop. Travis Scott would replicate this exact formula in 2019, with pop-ups around the “Astroworld” merch that launched him into his current streetwear reign.

The crewnecks and T-shirts showcased CPFM signatures, featuring “Lucky me! I see Ghosts” in puff print alongside smiley faces and flames. Kanye and Cudi never even toured this album — the extreme exclusivity and upgraded quality of this drop, bolstered by CPFM’s hype, launched Kanye’s merchandise into collectible territory. In tandem, it sparked the inflation of Kid Cudi’s merch: Cudi went on to collaborate with CPFM for his Entergalactic and Man on the Moon III albums, using bold design cues similar to his work with Kanye, and the resulting hoodies brought more hypebeast buzz than any of his previous merchandise.

Kanye tapped CPFM for his next two projects, which are now some of the most coveted and marked-up music merch ever made. At his Coachella Sunday Service performance in 2019, Kanye’s “Church Clothes” tent sold the flaming “Holy Spirit” and “Trust God” sweatsuits that practically became Keeping Up With the Kardashians cast members. The Yeezy blanks sold for $200, and currently resell for up to $1,100. Religion was more blatant in Jesus is King merch, with bubble-lettered lyrical references and Bible verses (including “Kanye 1:03”) in bright colors.

It’s hard to slap your name over a crucifix, and sell it as a $250 crewneck.

As religion became an increasingly commercialized part of his persona, this merch provoked a fair share of controversy — it’s hard to slap your name over a crucifix, and sell it as a $250 crewneck, without angering Christian fans. Jesus Is King was also a critical flop compared to his earlier albums. Yet, despite lukewarm reviews and accusations of blasphemy, the album’s merchandise was wildly successful.

Keeping Up With Ye

No musician gets the “separate the art from the artist” card more than Kanye West — his work topped the charts from interrupting Taylor Swift’s 2009 VMA’s speech to calling slavery a choice, and every presidential run in between. Kanye’s uncanny ability to make a spectacle out of his every move translates perfectly to streetwear, which thrives on the breakneck pace of subcultural trends and constant product drops. Kanye’s merch, in turn, has achieved its own agency, excelling regardless of his antics or even the popularity of his music.

From Yeezus to Donda, Kanye has curated his aesthetic universe to be one of the most recognizable in the music industry. His relationships with music and fashion have not only been symbiotic within his own life, but with the streetwear landscape around him. While the Yeezy label carves Kanye’s imprint within luxury fashion, he uses his merch as a creative playground, transforming each album into collectible garments. The lasting impact of Kanye’s merch has less to do with the artist himself, but more so with the creative ecosystem he creates around each project, and the aesthetic footprint it leaves behind.