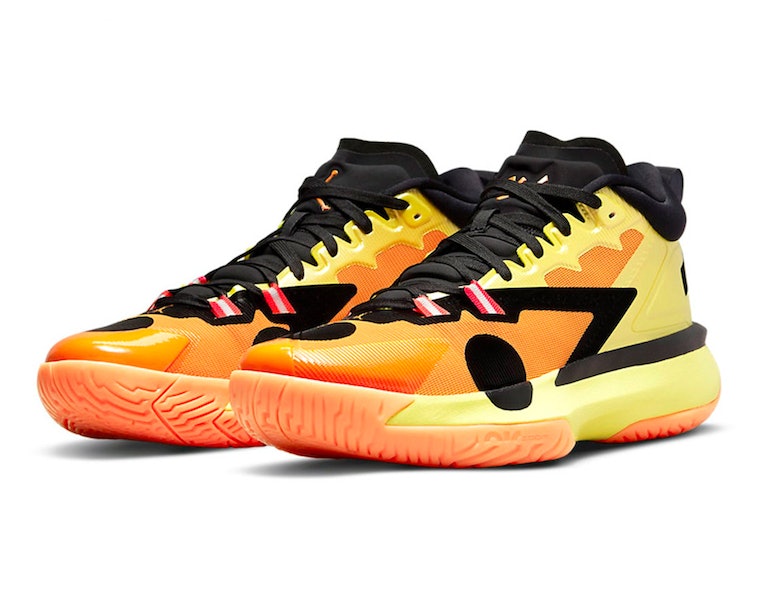 An injury has kept Zion Williamson off the court this season, but it seems the New Orleans Pelicans player is keeping occupied by designing sneakers. Roughly a year after debuting his Zion 1 basketball shoe, Williamson has revealed a collaboration between Jordan Brand and the popular anime Naruto. He teased the upcoming project on social media last week, sharing an image of the show’s protagonist Naruto alongside Williamson and Jordan Brand’s signature “Zion” and “Jumpman” logos.

While rumors of a Jordan Zion 2 sneaker have circulated, the collaboration will be centered around the original Zion 1, which is aptly inspired by superhero armor. With a flexible padded tongue, the shoe reduces pressure from the laces and provides more freedom of movement. A “Z” pattern splits the upper into two distinct parts, complemented by a stacked Zoom Air Unit underfoot. Extended construction lends extra stability — a must after Williamson infamously injured himself by ripping through a pair Nike PG 2.5s during a college game.

Channeling power within — The Naruto collaboration takes all of these features and dresses them in three color schemes, each which pays tribute to Williamson’s relationship with anime and nods to his and Naruto’s parallel paths of overcoming adversity. Like the protagonist himself, Zion has established himself as an unstoppable force.

Leading the anime collection is a mismatched black and white pair dubbed “Sage of The Six Paths.” Influenced by its namesake — and his power as the ancestor of Shinobi and the first Jinchuriki to exist — the sneaker flaunts motifs found on Naruto’s jacket, found at the rear of the shoes.

Following that take is another based on the “Nine Tails,” a power that was untamed until Naruto sealed it within himself. Black and red tones take over the sneaker to resemble the chakra cloak that covered Naruto’s body, while jinchūriki seal markings appear at the heel. Jordan Brand’s Jumpman appears on one sneaker’s tongue, while its counterpart features Naruto branding.

The last pair, dubbed “Kyuubi,” is a combination of the Nine-Tailed Chakra Mode with the Six Paths Sage Mode. Doused in orange and yellow shades, the shoe flaunts Rinne Sharingan dōjutsu graphics on its inflated tongues, adding a pop of red to its color scheme.

Coming soon — The “Kyuubi” Zion 1 is the first of the collection to release and will drop on May 11, while the remaining “Sage of The Six Paths” and “Nine Tails” sneakers launch a week later on May 18. All pairs are set to retail for $130 and will likely be released via Nike’s SNKRS app.

If you’re lucky enough to score a pair of the limited edition Zion 1s, you’ll be able to pair them with matching apparel, which takes on a similar red, yellow, and orange palette. Motifs from Naruto are sprinkled throughout sweatshirts, sweatpants, and tees, accompanied by Jordan Brand’s Jumpman logo. The offerings are expected to release on May 11, but keep an eye out on Williamson’s social media for a sneak peek at the Jordan Brand x Naruto collection before it drops.