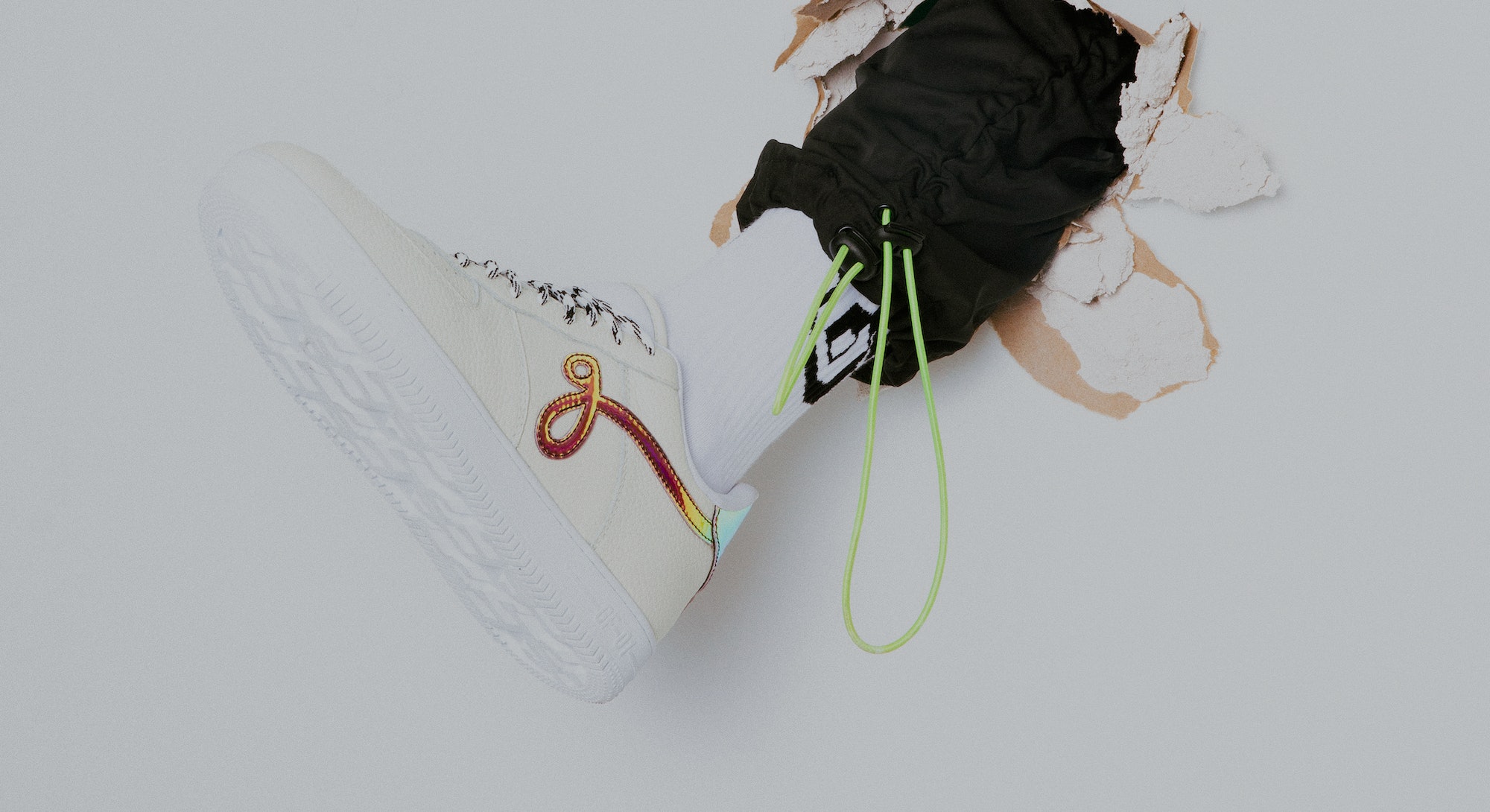 It's an arduous task to make a name for yourself in a space that belongs to multi-billion dollar corporations, like Nike and Adidas. But this doesn't mean the opportunity to shine isn't there — and independent sneaker designer John Geiger is full proof of that notion.

Geiger rose to popularity as a shoe customizer in 2014, around the time he began working with The Shoe Surgeon on a pair dubbed "Misplaced Checks." The sneaker featured 16 overlapping Nike Swoosh logos made from crocodile leather, pony hair, nubuck, and other exotic materials plastered all over a red Air Force 1. In an interview with Input, Geiger said the shoe's name was inspired by his days as a consultant, when the agencies he worked for would end up paying him late and eventually he found a way to turn those, well, misplaced checks into a positive.

Fast forward to 2020 and Geiger is getting ready to launch his new GF-01 silhouette on November 13, which takes cues from one of his favorite and most iconic sneakers of all time: Nike's Air Force 1, though this time it's a low-top version of it, unlike his luxury AF1 High from years ago. Oh, and there are no Misplaced Checks to be found here, as the GF-01 is designed to be a John Geiger sneaker through and through — even if it does draw inspiration from a Nike creation.

To better understand the GF-01, you have to go back to 2017. That's when Geiger decided to move beyond customizations and create his own namesake brand, which includes footwear, apparel, and accessories. Geiger has since collaborated with a wide range of companies from different industries, such as EA Sports, Sprint, Martell, Forgiato, and most recently, GM on the reveal of its first electric Hummer truck, showing that his creativity isn't tied solely to sneakers. Through it all, be it a shoe or a hoodie, Geiger says his goal is to create and offer the highest-quality designs possible, with premium and hand-crafted materials that you typically wouldn't find on most off-the-shelf products.

Of course, the challenge for Geiger (and every other indie streetwear designer) is how do you compete with brands that, almost literally, have endless amounts of resources? But he doesn't see it that way. "If I was making a basketball shoe, I'm never gonna compete with Nike," said Geiger. "It's going to take me years to get the technology to actually be able to wear a basketball shoe in an NBA game. So I really wanted to make [the GF-01] stylish to the point to where athletes want to wear them to the game, but they have the [basketball] shoes for the [actual] game."

A co-sign from an athlete can be monumental for designers like Geiger, since it can create a buzz around their brand that wouldn't be matched by any sort of traditional advertising. So far, his sneaker and clothing designs have been spotted on A-list NBA and NFL players including Jayson Tatum, Kyle Kuzma, Tyler Herro, and Odell Beckham Jr., as well as popular celebrities like Teyana Taylor. Additionally, Geiger has a direct-to-consumer approach to his business that spans across social media, where he has more than half a million followers on Instagram and over 67,000 on Twitter.

“If I was making a basketball shoe, I'm never gonna compete with Nike.”

"It's kinda crazy that in the last seven months, everybody's like, 'Learn how to sell direct-to-consumer,' and we've been doing that for the past three years," Geiger said. "That's something I believed in from day one, and our customers and the fan base is growing, and with the GF-01 it's really gonna grow because of the price point." At $190, the GF-01 is Geiger's cheapest sneaker to date, and while it may be $100 more than the silhouette it takes after (the AF1 Low), there's a uniqueness to it that might make it appealing to sneakerheads — and that may put a new wave of people onto his brand.

At first glance, the overall shape of the GF-01 looks quite similar to Nike's Air Force 1, except the Nike Swoosh has been replaced with Geiger's own "JG" logo. The first style is called "Off-White Pebble Leather," which combines a light beige-esque soft, durable leather with black-and-white laces and that iridescent JG finish that wraps from the middle of the upper all the way to the heel tab. Geiger says he also designed and developed his own outsole, a detail that shouldn't go unnoticed because it helps make it different enough from an AF1 to — hopefully for Geiger — keep the Nike lawyers away.

With his roots as a sneaker customizer, Geiger is no stranger to ruffling the feathers of major footwear brands. Just earlier this year, back in July, Geiger was involved in a legal dispute with Vans over the use of a lower-case "G" in his logo and it being seen as a "likelihood of confusion." Geiger told Input the issue is that Vans thought the squiggled G looked too much like the end of its "Vans" symbol, noting that the company wasn't coming after him for his GF-01 shoe but rather the G logo trademark. Ultimately, Geiger added, his team worked around that, though the trademark dispute ended up causing production delays.

As for whether he's worried Nike may take an issue with his AF1-inspired GF-01, Geiger says he's not concerned about getting sued by the sportswear giant. "It's impossible," he said. "We just changed it way too much. We used our own sole, we use our own materials, we have our own logos." Geiger said that without the GF-01 sporting a logo akin to Nike's Swoosh, or since he's not "making the shoe and colorways that Nike did, and then using materials and a sole that look like its [own AF1]," he and his lawyers are confident there simply aren't any legal grounds there.

Right now, Nike is in the middle of suing a friend of Geiger's, Warren Lotas, who the brand is accusing of designing and selling sneakers that are "illegal fakes and "not legitimate customizations" of its famed Dunk Low. And while it's clear the GF-01 borrows design ideas from the AF1, it's not as blatant as Lotas' "bootleg" Dunks, which bared similarities to Nike's sneakers down to the name, logos, and colors. "I'm doing a tasteful way of showing respect to something that really had me in footwear," Geiger said.

Ultimately, Geiger says the goal with the GF-01 is to pay homage to the Air Force 1, a staple of sneaker culture. "That was my favorite shoe growing up," he said. Geiger tells the story of when he first began working on the sneaker, in June of 2019, and how he would be wearing his 002 sneaker around Los Angeles and, anytime he'd come across a pair of AF1s, he would lust after them. "I was like, 'Damn, I wanna wear them,' but I wanna wear my own shoes," said Geiger. "That's how it started. I wanted to wear my favorite shoe of all time. What led me into footwear was an Air Force 1, and that's my inspiration behind the GF-01."

At the same time, Geiger says he would've "loved" for Nike to contact him about collaborating on an Air Force 1, but since that never happened, he decided to make his own. Ironically enough, there are people in the sneaker space who think Nike has "ripped off" sneaker customizers for some of its designs before — including a Travis Scott AF1 that features misplaced Swoosh logos — though that's not a concept the company will obviously admit to. Still, Geiger says his appreciation for Nike runs deep and that won't ever change, so much so that he truly believes the two will work together on a project in the future.

"It will happen eventually," said Geiger about a possible collab with Nike or even its main rival. "I'm almost positive that either Nike or Adidas are looking and being like, 'Okay, I see the influence in the culture and the movement he's having' and it would make this a no-brainer." Until that happens, though, Geiger said, he's "not sitting at home" waiting for help to come. His GF-01 is, finally, here and that's what he's focused on until his next project comes along — with or without Nike, Adidas, or anybody else.