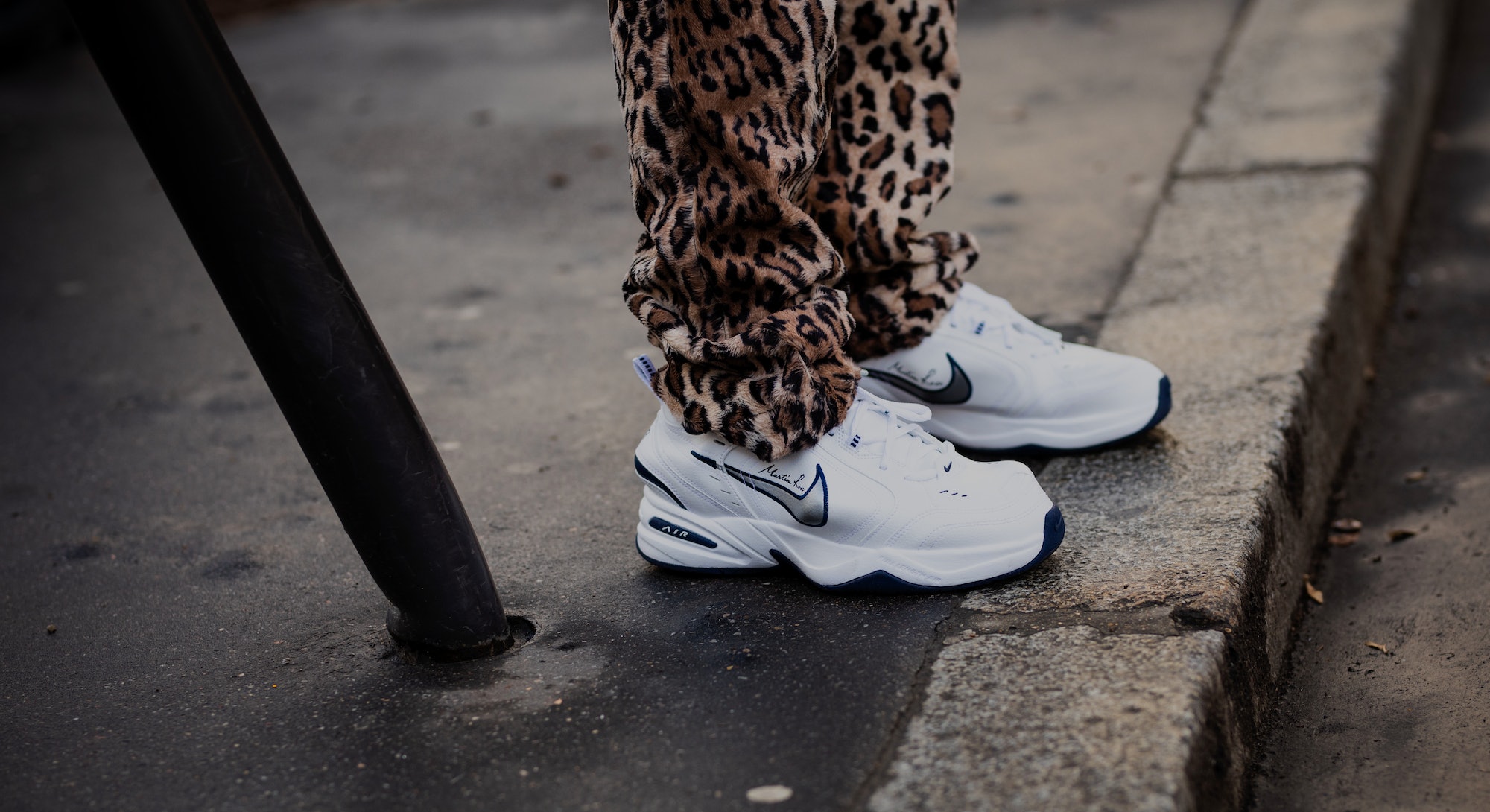 Back in October, conceptual designer Nicole McLaughlin did what she does fairly frequently: she sent her Instagram followers into a frenzy.

But this time it wasn’t for stamp stilettos or a sandwich bag vest, two of her more experimental creations of the past few months. McLaughlin announced her first-ever footwear collaboration, with... Crocs. Her take on the Classic Clogs featured a weatherproof guard, compass, and flashing headlight — and they sold out in minutes when they dropped on October 27. McLaughlin’s Instagram page had all the excitement and fire emojis of a Yeezy drop, but with significantly more talk of Jibbitz (for the Croc virgins, Jibbitz are the customizable plastic charms that snap into the... Croc holes?).

So, how exactly did we get to a point where Crocs are a justifiable grail? The answer is a simple, slow-burning timeline: dadcore, a blur of pop culture, expertly-timed collaborations, irony, and nostalgia.

This summer’s collabs that catapulted Crocs into streetwear took many by surprise — the squeaky rubber mules jumped from PTA meetings to the NBA bubble almost too easily. The brand's rap sheet of recent collaborators (Grateful Dead, Justin Bieber, Bad Bunny, and Ruby Rose, to name a few) is almost as unpredictable as its growing A-list fan club, which has initiated industry tastemakers from Ariana Grande to LeBron James.

While the dadcore aesthetic has been permeating fashion since the ‘90s, the style has stealthily made its way into the fashion zeitgeist through plenty of low-key celebrity endorsements. Crocs are just a symptom of dadcore style, and their recent explosion across streetwear circles might be a final blessing of coolness — so, where can dadcore go from here?

First, let’s break down what exactly dadcore is. Dadcore diehards wear clothes that are comfortable above all else, with little regard for fit or appearance. Function and practicality are top priorities — a dadcore 'fit must be comfortable enough to carry the burden of grill duties, bad puns, and carpool schedules. While there is a recognizable uniform: cargos, tucked T-shirts, or ill-fitting polos copped at the local Costco, the “dad sneaker” is a key element of the look.

“These shoes are casual, orthopedic, inexpensive, and widely available. They may try to give the impression of a technological shoe, but actually lack any high-end performance features,” said Sergey Velsin, streetwear consultant and archivist behind the Instagram page "Trainer Spotting." He cited the Nike HealthWalker and infamous Air Monarch as quintessentially dadcore.

Streetwear’s current wave of Croc-core can arguably be traced back to Post Malone x Crocs. Malone’s canary yellow clogs met equal amounts of surprise and fanfare — each of the two drops sold out within 10 minutes, which has since become the norm for Crocs’ limited-run collaborations. Once Posty cracked the mainstream floodgates, more dadcore staples followed suit.

“Lo and behold, once you Croc you never go back.”

In the last two years, the “dad sneaker” has become a canvas for streetwear’s mainstay designers and rising stars alike. In January 2019, Martine Rose redesigned the Air Monarch IV, further exaggerating the silhouette’s infamous chunkiness. Aimé Leon Dore kicked off their buzzy partnership with New Balance later that year; their redesign of the classic 990 was so hyped, the in-store release was shut down by the NYPD. New Balance continued to pave the way into 2020: first with the Aimé Leon Dore 827s, then Jjjjound 992s that sold out in seconds.

Then there’s the even cozier dadcore footwear. In August, Birkenstock partnered with Stüssy, releasing a neutral slip-on that quickly became a toilet paper-run shoe of choice. Reebok tapped both Pleasures and Brain Dead to redesign their clunky Beatnik slippers, both of which garnered as much buzz and drop-date drama as a collab sneaker.

Crocs, for its part, brought dadcore full-circle with a murderer’s row of collaborations. There was the Chinatown Market pair in September — cloaked in tie-dye, covered in Jibbitz, and immediately snapped on none other than LeBron James. They then partnered with Greenhouse for the recent trio of redesigned clogs: Anwar Carrots, Justin Bieber, and McLaughlin.

All of these collaborations (combined with the co-sign of style-savvy celebrities) have landed us in a timeline where Crocs and Air Monarchs coexist among the Dunks and Air Jordans of the footwear world. Although it’s fun to laugh at Crocs’ sneaky come-up (and maybe quietly buy a pair), this moment signals a greater mentality shift within streetwear.

“The future 'uncool dads' will probably be wearing Yeezys.”

Thanks to the coronavirus pandemic, this summer saw the world’s hypebeasts quarantined at home with nowhere to flex — and nowhere to turn but comfier shoes. “We were kind of pushed into a corner — we can't wear sneakers inside, so what else can we wear? Crocs,” said Liz Beecroft, a Brooklyn-based streetwear influencer who started wearing Crocs after childhood basketball games and now owns 40 (!) pairs. “They already had a bit of a reputation within streetwear from some of the past collabs, but now, people are like 'Fuck it, I'm not going anywhere anyways.' Lo and behold, once you Croc you never go back.” And Croc they did — the company recently reported a third-quarter sales increase of 15.7 percent, translating to roughly 16.9 million shoes.

Quarantine aside, perhaps dadcore’s rise represents exhaustion at the relentless fashion cycle, which moves even faster within the dizzying drop calendar of streetwear.

“There’s a demand for democratization in the sneaker market. People got tired of overpriced, unobtainable pieces, and availability is one of the main features of dad shoes,” Velsin said. “The dadcore aesthetic simply legitimized cheaper shoes within the fashion-conscious crowd.” The staples of dadcore are relatively affordable — Birkenstocks start at $99, Monarchs $70, and Crocs just $45.

It’s a refreshing step down from the sneaker cycle, with drops starting at triple-digit prices and sometimes going quadruple once they hit the resale market. Exclusivity is currency within the streetwear industry, but the hype train’s mental and financial toll was bound to have an expiration date — that is, until the hypebeast-approved collab Crocs began hitting StockX with price tags upwards of $100.

“When you think of streetwear right now, especially with younger generations, it's so much about hype — and that takes away from individuality,” Beecroft said. “You don't have to be a certain type of person to wear Crocs... that's what I really align with: having this brand that you really fuck with, but being able to have your own individual sense of style within that brand.”

Love it or hate it, dadcore isn’t going anywhere anytime soon. Thanks to smart partnerships, '90s nostalgia, and quarantined sneakerheads with nowhere else to turn, the comfort-first aesthetic of dadcore is seeping into streetwear and soothing the exhaustion of its drop-based model. Whether its infamous staples remain trendy is still up for debate, but the practicality and individuality at the root of dadcore seem to be everlasting.

“Every trend fades away sooner or later. Dadcore could return at some point in the future, but Monarchs will be replaced,” Velsin said. “The future ‘uncool dads’ will probably be wearing Yeezys.”