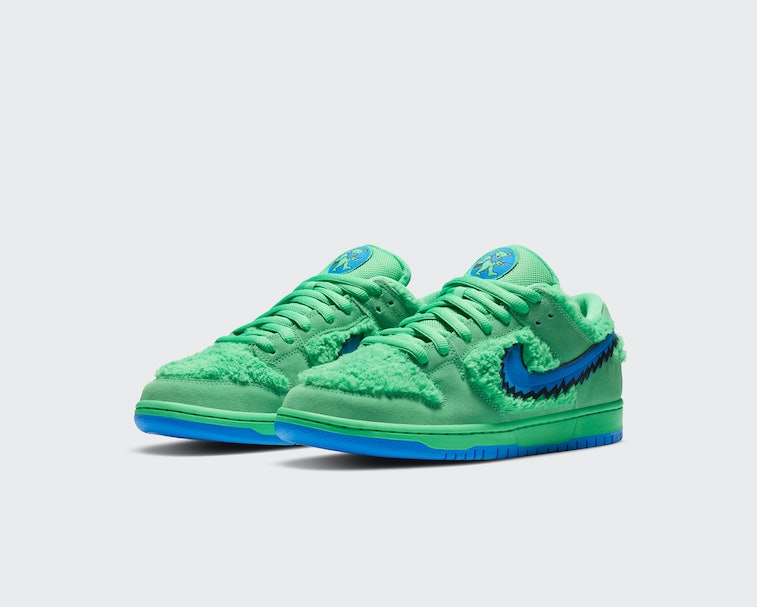 Bootleg Grateful Dead merch has been an unexpected revelation within streetwear over the past several years, with the aesthetic becoming the core of Online Ceramics and inspiring countless other pieces throughout the space. Now, Dead Head mania has risen to the highest level with an official Nike SB Dunk Grateful Dead set to arrive in three colors this month.

The Grateful Dead Dunks channel the Marching Bears with a delightfully furry upper that will release in green, yellow, and orange over the next two weeks. The jam band's mascot appears on a round tongue patch, while Nike Swoosh has been given a lightning bolt treatment culled from the Dead's other famous icon. It all makes for a sneaker so fun that Dead Heads and band agnostics alike will be rushing to secure a pair.

The stash pocket returns — Nike is also giving a nod to Dead Heads' proclivity for drugs by utilizing the stash pocket first introduced in the iconic Skunk Dunk (and originated by Chad Muska's first éS sneaker). An even more hidden detail is the Steal Your Face skull printed on the underside of the sockliner, while the lightning bolt is more visible with another Grateful Dead graphic printed on the inside of the tongue. "Nike" is stitched onto the heel in the band's signature font, rounding out a strong assemblage of Dead imagery.

Kicking knowledge on Bear — The Marching Bears were created in honor of Owsley "Bear" Stanley, the band's audio engineer and benefactor. As David Lemieux, the band's archivist and legacy manager, said of the Dead and Bear, "They were talented musicians, but they would not have had the financial freedom to forgo jobs, move to Los Angeles and practice for 14 hours a day. The band wouldn’t become what it is today without Bear’s innovations and contributions."

Dead merch: it's hot — Grateful Dead merch, and more often the bootleg variety, has been a mainstay in streetwear since 2018 with its propensity for tie-dye and elaborate graphics. But perhaps even more important is the DIY ethos, which has informed Online Ceramics, Cactus Plant Flea Market, and Advisory Board Crystals.

Online Ceramics' shirts run in small quantities and each is handmade in the brand's Los Angeles studio. They've ranged from direct Grateful Dead treatments to a years-long partnership with A24 to make merch for its critically acclaimed films.

The Dunk rollout — The Grateful Dead Dunk will first release in orange July 18 through the San Francisco-based skate shop FTC. The yellow and green versions will then drop on July 24 at select skate shops, with the yellow being the only one to release through Nike's SNKRS app. Because of the nature of the release, orange will likely be the most difficult to cop — but all of these will be scooped up instantly.